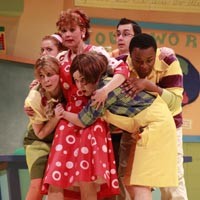 Sometimes the smallest thing can make a play seem magical. In Theatre IV's “Sideways Stories from Wayside School,” it's the eerie reverb haunting the voice of kindly teacher Mrs. Jewls (played by K Strong), which indicates her possession by the spirit of evil Mrs. Gorf (Robin Arthur).

That nifty tidbit, engineered by sound designer Derek Dumais, is indicative of a production in which the technical elements shine even when the play itself falls short. With a set that literally comes to life, designed by Brian Barker, and costumes, developed by Elizabeth Weiss Hopper, that delineate character more than the script does, “Sideways Stories” is a testament to the enchantment of stage magic.

The fractured plotline of the play recounts the bizarre life of pupils on the 30th floor of Wayside School, an institution mistakenly built vertically instead of horizontally and mysteriously missing a 19th floor. While the youngsters thwart Mrs. Gorf, who seems bent on turning them all into apples, pitfalls remain in the form of random tornadoes, wandering cows and Gorf's equally evil son (also played by Arthur).

The talented cast does exceptional work, almost transcending an inconsistent script that has several slow patches and questionable breaches of internal logic. Arthur shines, playing each of her characters with bracing gusto, particularly the awkward dastardliness of young Mr. Gorf. While each pupil is given one quirky trait and little else, Jonathan Perez makes a great impression as Myron, the mildly mischievous pigtail puller who falls under the hypnotizing trance of counselor Mr. Pickle (also Arthur). The always-winning Tony Foley delivers a second-act highlight, his playground teacher character compelled to perform a hip-thrusting “Saturday Night Fever” dance.

Director Steve Perigard embeds some nice comic bits specifically for adults (the song “It's Not Unusual” emerges unexpectedly at one point) but it's his design team that really stands out in “Sideways.” S