Tears in the Tombs 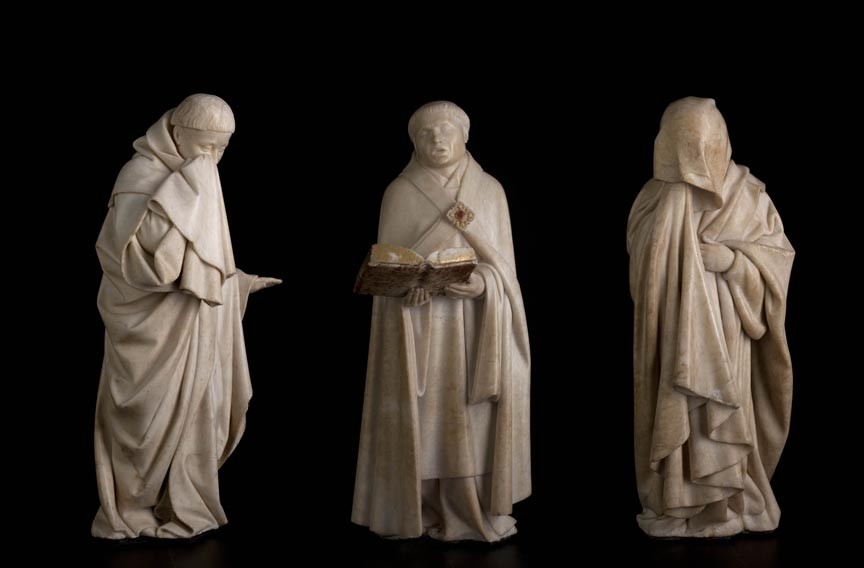 The aristocracy reigned supreme during medieval times. During the 14th and 15th centuries the royal French Valois dukes of Burgundy were both admired and feared as their power extended through France, Belgium, Luxembourg and the Netherlands.

At the same time, they were known as patrons of the arts. When Philip the Bold (1363-1404) died, his son John the Fearless (1404-1449) made sure that his father’s magnificent tomb would be finished and adorned with a series of mourners who openly expressed their profound grief and respect. John the Fearless thought it was such a good idea that he conceived the same sort of elaborate tomb for himself. These two burial altars became the focal point of a 15th century monastery chapel at Champol, also renowned for its Well of Moses.

In the 19th century the tombs were moved to the Musée des Beaux Arts in Dijon. The room that houses the tombs is now under renovation and the mourners have been traveling to various cultural institutions across the globe. More than three dozen intriguing examples from the tomb of Jean the Fearless are considered masterpieces of sculpture, rivaling the works of the Italian Renaissance. “The Mourners: Tomb Sculptures from the Court of Burgundy” is currently on view at the Virginia Museum of Fine Arts as part of a traveling exhibition from the French Regional American Museum Exchange.

Each tomb, when shown in its entirety at the Dijon museum, has a life-size statue of its duke resting on top, encircled by angels. Within a Gothic arcade at the tomb’s base are alabaster figures created by the master sculptor of the day, Claus Sluter, and members of his studio. Encircling the bases, these figures convey deep emotion as they seem to form a funeral procession while they weep and pray. There are even hints of resurrection.

The draped figures are so intriguing that the viewer can sense sadness even when their faces are covered. Some figures are nearly 15 inches high and represent people of all ages and all walks of life, suggesting that they represent religious and lay admirers. The procession figures include a holy water sprinkler, two altar boys, an acolyte carrying a cross, two monks, three cantors and a bishop.

As part of this intriguing exhibition, the Virginia Museum of Fine Arts has hung a huge image that shows the two tombs as they appeared at the Dijon Museum just before renovation. And the figures are lined up on dual platforms, making it easy for everyone to browse, linger or weep along.

“The Mourners: Tomb Sculptures from the Court of Burgundy” will be on view at the Virginia Museum of Fine Arts at 200 N. Boulevard through April 15. Information is available at vmfa.museum.