For Jamie Radtke, the party starts in wakefield 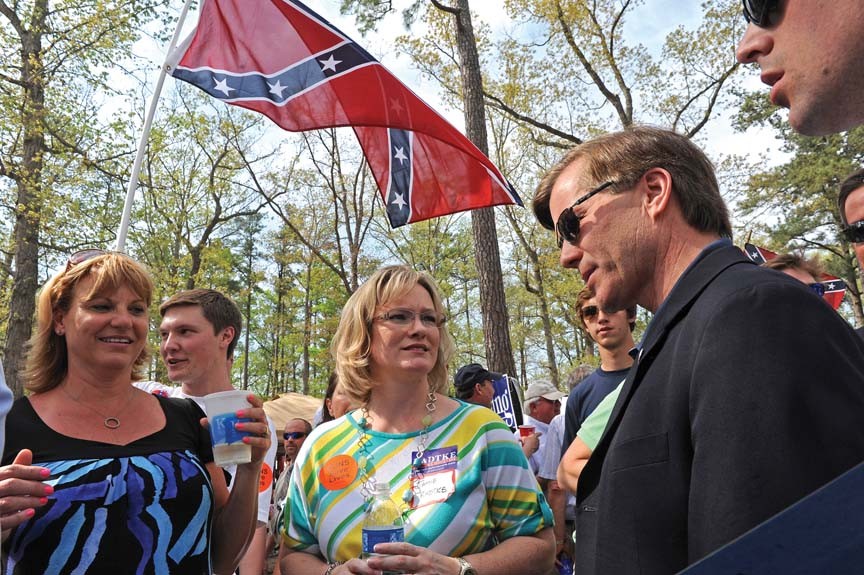 One guest, hearing Jamie Radtke's name, asks who "he" is.

"You a Ron Paul-type girl," another man tells Radtke approvingly.

Yet another man brings Radtke a white baseball cap that says, "Turning Our Country Around — George Allen." He asks for her autograph, right next to Allen's — never mind that the former governor is Radtke's opponent for the Republican U.S. Senate nomination. She's a good sport. She signs it.

Radtke, a Richmonder, tea party favorite and longtime political activist, is trying to figure out what to make of this whole affair.

Cigar smoke ascends to the heavens, along with the souls of a few thousand crucified fish. Confederate flags gaily wave. Pistols hang on the hips of open-carry advocates — hey, you never know what might go down while you're waiting in the food line. It can only be the 63rd Shad Planking in Wakefield, the annual Virginia political ritual of glad handing, trash talking and beer drinking.

Allen, a veteran of 17 or so plankings, waxes expansive: "It's the way politics really ought to be. It's bipartisan and just a lot of good folks from all over Virginia gathered here in these pines. And smile. And eat and drink and mostly be happy."

Radtke has worked for Allen. She even babysat his children. Now she's going up against him for the 2012 Republican Senate nomination. "We just need something different. It's not personal," she says. "Sending a career politician to D.C. and thinking it's going to be different this time around isn't being realistic."

Already, the differences in Allen's and Radtke's campaigns emerge. Allen, flushed and jovial, throws out catchphrases like confetti — "clean-coal technology," "health-care monstrosity" — as three matching male handlers, in blue oxford-cloth shirts and khakis, usher him through the throngs. Hundreds of blue Allen campaign signs flutter along the roadsides.

Radtke has a small tent decorated with handmade posters. One, on a box of lollipops, reads, "The dum dums in DC think we are a bunch of suckers!"

She's not intimidated by the Allen-ness of the Shad Planking. "I've had a number of people with Allen stickers on coming up to me, saying 'I'm going to support you, I'm all behind you,'" she says.

Might want to tell that to Gov. Bob McDonnell. In his groaner-laced speech, he predicts a Senate race between former Gov. Tim Kaine (who, along with most other Democrats, is absent from the Shad Planking) and Allen. "Two guys running for a job that neither of them really wants," McDonnell says. "I mean, what a battle that's gonna be."