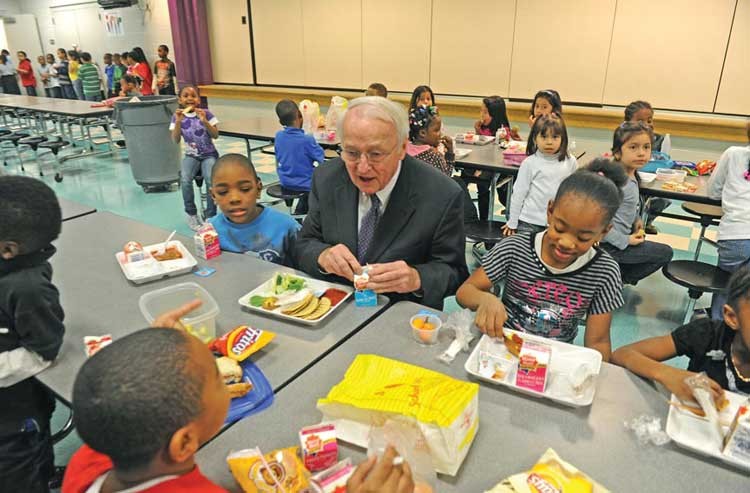 Every school lunch tray soon will look like the ones at Miles Jones Elementary School.

Those tater tots? Baked, not fried.

The corn dogs? They're chicken.

Even the mini tacos have whole-grain shells. And there isn't a shred of Salisbury steak to be seen.

For years this elementary school in South Side Richmond has offered the healthy lunches that soon will become mandatory for public schools across the country. The U.S. Department of Agriculture recently unveiled new rules that require pupils be offered fruits and vegetables every day, as well as more whole grains and less fat.

On Monday, the department's undersecretary for food, nutrition and consumer services, Kevin Concannon, made an appearance at Miles Jones to smile approvingly at children while they danced, worked out and ate fruit cups. The new federal guidelines are the first major change to school lunch menus in 15 years, Concannon says.

Does this mean this goodbye to tater tots?

What about bake sales?

"You can have an occasional bake sale. Occasionally."

The Richmond Public Schools will have to tweak their menus only slightly to meet the new regulations, says Susan Roberson, director of school nutrition. The deep fryers were removed from kitchens long ago. This week's lunch menu includes spinach salad, star fruit and whole-grain pizza.

Yet while children line up beneath the big banner that reads, "Just Say Yes to Fruits and Vegetables," an awful lot of them skip the romaine salad and raw snow peas. Instead they walk away with trays of tater tots, corn dogs and chocolate milk. "Hot dog day!" one boy crows.

Roberson isn't worried. "The more you introduce it to them … the more they'll change over sooner or later," she says.