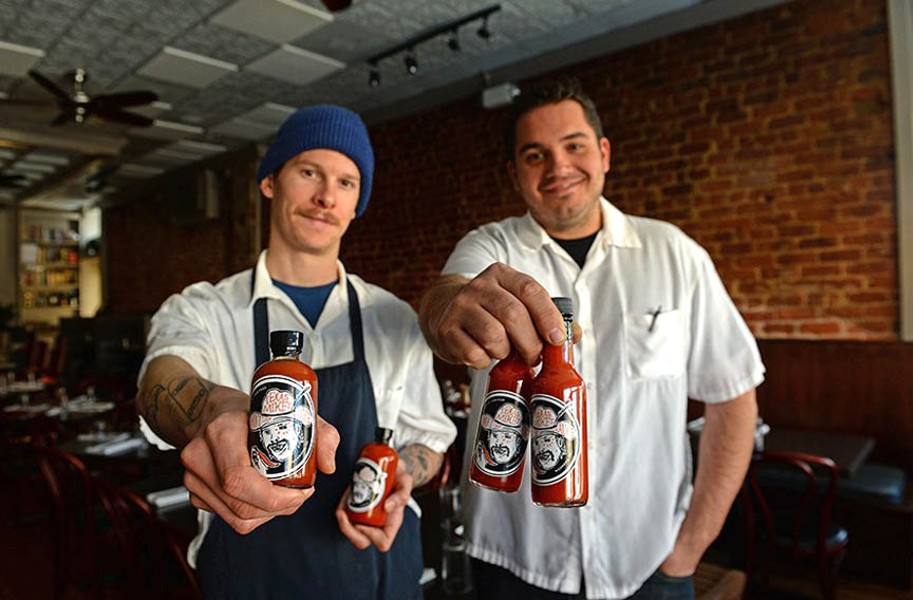 Scott Elmquist Heritage’s sous chef Mike Hill and chef and owner Joe Sparatta make their own hot sauce called Texas Mike’s, on tables at brunch and for sale at the restaurant.

The standard joke around here is that if something’s hot in New York or San Francisco now, it’ll be five years before it hits Richmond.

Not necessarily so, because trends evolve over time and, to a certain degree, must respond to the eating public’s taste. Recall how reluctant Richmond was to respond to offal? Yet now sweetbreads, beef cheeks and pig’s head barely elicit a raised eyebrow at some of the more adventurous eateries in town.

Joining their piquant-focused brethren nationally, plenty of Richmond chefs seem to have taken the pickle pledge, adding pickled and fermented items to menus with abandon.

Look no further than Perly’s Restaurant & Delicatessen’s pickle plate for proof. Vagabond puts pickled jalapeño on smoked chicken wings, while tagliatelle with beef ragu gets a kick from fermented peppers at Dutch & Co. In the mo’ pickled, mo’ better category, Saison does pickled eggs with pickled beets, and Rapp Session doubles up on cured scallops with both pickled beets and pickled mustard seed.

You know it’s a trend when Richmond not only has an Artisan Pickle Club, but that it’s the host of Pickled & Fermented, a celebration of just that — pickled fruit, pickled vegetables, hot sauce, kimchi, beer and kombucha — at Center of the Universe Brewing Co. in May.

House-made hot sauces, a trend that kicked into high gear here in 2015 and shows no sign of abating, continue to add sass from brunch to dinner. An otherwise-typical fried trout sandwich at the Roosevelt becomes a heat head’s delight with the addition of its sparky sauce, and similar makeovers can be sampled at Heritage, Pasture and Rancho T.

A particularly welcome trend for someone with a sweet tooth also happens to be the No. 1 dessert trend for 2016: house-made artisan ice cream. Can Can Brasserie has been making it forever, and at Amour Wine Bistro, where flavors change with the seasons, look for grapefruit or clementine sorbet in winter, and melon or raspberry come summer time.

Castanea’s Philip Denny imports pistachio paste from Sicily for his most swoon-worthy gelato flavor, a must-try whether or not you think you like pistachio. And some of us are partial to combining double chocolate gelato with a scoop of coconut sorbet for a riff on a Mounds bar.

Frozen desserts are enough of a trend that even restaurants that don’t make their own — Graffiato, Enoteco Sogno, the Daily Kitchen & Bar — turn to local artisanal makers such as Deluca Gelato in the West End to keep their dessert menu hip.

Local vegetable, herb, mushroom and cheese purveyors contributed to a decade-long push for not only more local sourcing, but also root-to-stalk and nose-to-tail cooking, with far more of the latter going on thanks to an increase in the number of local meat suppliers.

Whether or not you jump on the “Drynuary” bandwagon and take a month off from booze at the beginning of the year, trendy nonalcoholic drinks with personality — house-made sodas, tonics and virgin versions of classics — deliver all the flavor complexity of cocktails and none of the hangover.