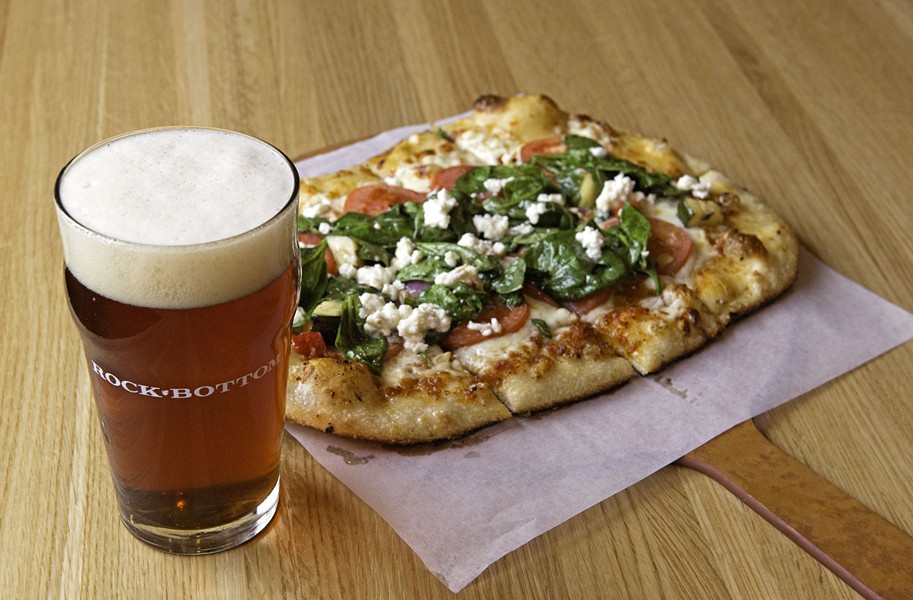 Crazy busy on a Wednesday night, Rock Bottom Restaurant & Brewery is loud, loud like a fraternity party. The bar is two-deep with professionals and couples. Tables are packed with families. Everyone is yelling. What seems like a thousand waiters and waitresses wield trays of tasting glasses filled with a rainbow of beer that they're trying to keep from landing on unsuspecting patrons. Think Chuck E. Cheese with glorious high ceilings and projector screens.

The 38-location chain opened the Richmond outpost of its brew pub in early June at Short Pump Town Center. Its menu is as varied as the clientele. Myriad appetizers, deep-fried, covered in cheese or Hot Pocket-like, won't impress, but similarly won't be too disappointing. A comprehensive lineup of salads reads just as you'd expect on a chain restaurant's menu — a Caesar, a wedge and a cobb, among others. And if the house favorites — pasta, tacos and ribs — aren't enough of a choice, you'll find burgers, steaks, sandwiches and pizza to contribute to any indecision you may have.

An open kitchen gives an unobstructed view of the staggering menu that gets shoveled out as fast as possible. Southwestern egg rolls ($9.95) are a hodgepodge of zucchini, corn, black beans and chicken stuffed in wonton wrappers and cut on the bias. The effect is crunchy where it shouldn't be and chewy in the wrong places.

Rock Bottom wings ($9.95), small little things, are supposed to have a "wicked but not too wicked" sauce. They lack spice, but are an adequate prop for a well-made beer. Steak mini tacos ($9.95) should be passed over, with their chewy, tough beef, for habanero shrimp ($8.50). Several large shrimp, thinly breaded and quickly fried, are dunked in a sauce with sneaky, sweet heat. Jalapeño-spinach cheese dip ($9.50) has very little spinach and only four slices of the peppers. The dip is unappetizingly congealed and comes with stale tortilla chips.

A huge "borbonzola" burger (say that three times fast), topped with crumbled Gorgonzola, somehow arrives squishy and soggy. A Woodford Reserve bourbon glaze caramelizes the beef on the grill, which adds sweetness to a sandwich that seems already soaked in the saccharine glaze. Although it's unappealing as-is, you can see how, with a few tweaks, this burger might have potential.

A mixed medley of squash and zucchini is a nice touch as a side, but undercooked. Fish and chips ($13.25) are just sad. The huge, breaded cod chunks taste of freezer burn and the french fries are cold. One bright note: A side of coleslaw surprises, with balanced flavors of apple, cabbage and citrus.

Diners rapidly come and go at lunch, yet the service is poor. Our table has no fewer than three servers who don't seem to be communicating with each other. Baby back ribs ($17.95) get lost in the shuffle, and when they finally appear, they're so tough that sawing at them becomes comical. The avocado chicken sandwich ($10.25) is a serious flop. Its taste-bud-pulverizing, Liquid Smoke-like flavor causes one lunch companion to exclaim that he needs a new mouth. Half of an appetizer appears at the empty bar table behind us with no explanation, sits for a few moments and is whisked back into the kitchen.

But a gargantuan roasted vegetable pizza ($10.95) is heads above the rest of the meal with well-textured tomato sauce and bits of squash, tomatoes and zucchini. My only issue is with the pile of superfluous raw spinach overdressed in a pink balsamic vinaigrette propped up in the dead center of the pie.

Take your time though. Blessedly, there's good beer to drink. Thirteen in-house beers are available for your tippling pleasure, plus a few that rotate on the brewer's whim. And these are the real reason to stick around under an obscure soccer game projected above your table.

A sign that states "Always Brewing" hangs above a huge flat-screen TV. While no one is actually brewing while I'm here, it's clear that this is Rock Bottom's strength. Seasonal beers with clean presence show great skill.

Rock Bottom's specialty dark variety is a rotating series of dark beers, and currently it's a nitro porter, Black Pearl Stout, creamy and full of overt coffee notes. The Short Pump Steamer is a solid riff on a steam beer, trademarked by Anchor Brewing Co. Brewed with lager yeast and fermented at a warmer ale temperature, the beer is an easy-to-drink session ale made well.

Now if only they could transfer that deftness to the kitchen. S