A new mural project across the street from the VCU Police Department is telling the “stories, dreams and demands” of young people. 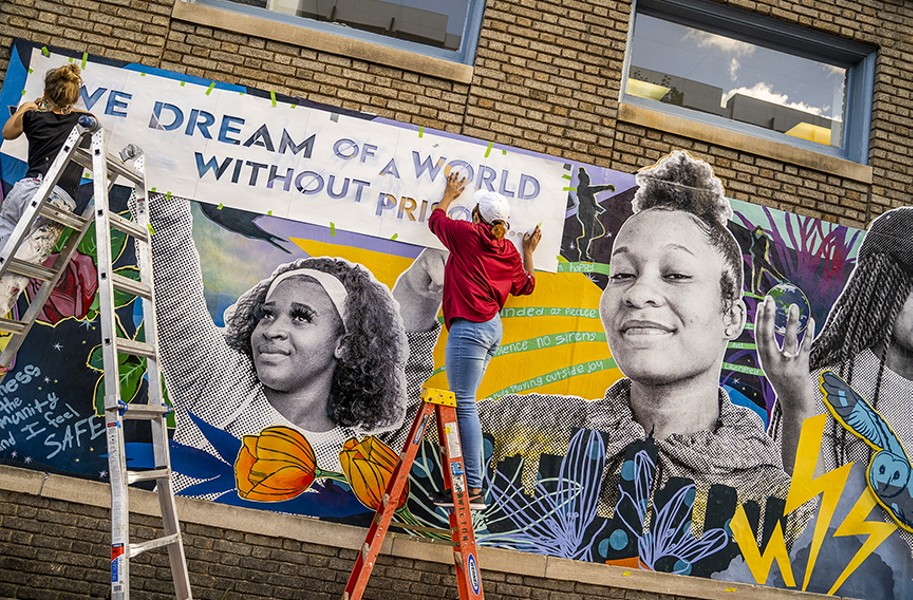 Iyana is 15 years old and her greatest hope is that seeing the mural she helped create will make a difference. She wants people to finally realize that there’s a serious problem with the way that today’s youth are treated and get motivated to fight for change.

The new interactive mural, “Freedom Constellations: Dreaming of a World Without Youth Prisons” was officially unveiled on Friday, Nov. 6. Across the street from the Virginia Commonwealth University Police Department headquarters at Third and Broad streets, the mural makes a powerful statement that a better future – one where youth are invested in rather than placed behind bars – is possible for Virginia’s young people. Through augmented reality and the ability to use cellphones to hear young voices directly, the mural puts their stories, dreams and demands for a new future in plain view for all to experience.

The mural is a collaboration between CodeVA, a Richmond nonprofit that works with schools, parents, and communities to bring equitable computer science education to all Virginia students, Performing Statistics, a cultural organizing project that models, imagines and advocates for alternatives to youth incarceration and Rise for Youth, a nonpartisan campaign committed to dismantling the youth prison model by promoting the creation of community-based alternatives to incarceration.

Two groups of young people made the mural possible. Three days a week for four weeks, the young people came together to use a multitude of art mediums to imagine and illustrate the more positive future they want for everyone. They worked with a group of artists, advocates and educators to design, produce and install the artwork.

After the workshops were finished, CodeVA convened with a group of high school students to transform the art – the mural, videos, poems and radio broadcasts – into a series of interactive and augmented reality installations.

Natasha Kovacs, community partnerships coordinator of CodeVA, says one of the things the organizers wanted was for the mural to draw people closer to the art.

“So we installed distance sensors that can tell when someone is walking past it and when they get closer, the audio gets louder and the lights blink,” she says, explaining that they want to pique viewers’ curiosity to look closely at the imagery. “We also have augmented reality that uses phone cameras to add another layer, so if you use your phone to scan a QR code, it will show you more information about the process of making the mural and point you towards Rise for Youth and Performing Statistics.”

Youth voices have historically been silenced and excluded from political and cultural sites of power. Mark Strandquist, founder of Performing Statistics and currently its creative director, has always made part of the group’s work to ensure that when young people in their programs share their stories and dreams, the adults do everything they can to make sure people hear them. He sees the mural as a look into one possible future that could be part of the blueprint for building a more just and beautiful world.

“Having a mural that says ‘We dream of a world without prisons’ in huge letters directly across from the VCU police station, a couple blocks from City Hall and on a main road in Richmond is both clear and strategic,” he explains. “People in positions of power need to hear the words and dreams of young folks because the future of the city is theirs, and I believe it’s our job to help support and amplify that dream.”

Director of Children’s Programs Maggie Smith says a common misconception is that CodeVA simply teaches computer programming when it’s actually using an arts- integrated approach to get kids who may not traditionally be exposed to computer science excited and curious about technology. With “Freedom Constellations,” she says students are amplifying the voices of other young folks who are often overlooked or ignored within their community.

“They’re using augmented reality, 3-D printing and micro-electronics to promote social change,” Smith says. “We want our students to be inspired by computer science and enhancing this piece of art made by their peers is potentially one of the coolest experiences we’ve offered our students.”

For Iyana, it was important to get involved with the mural because there are so many youths like her who don’t have any say.

“I wanted to be the voice for those that either don’t have a voice or don’t know that they have a voice,” she says.

“Freedom Constellations: Dreaming of a World Without Youth Prisons,” was unveiled Nov. 6 as part of First Fridays at Third and Broad streets.