Remembering the filming of “My Dinner with André” at the Jefferson Hotel, 40 years later. 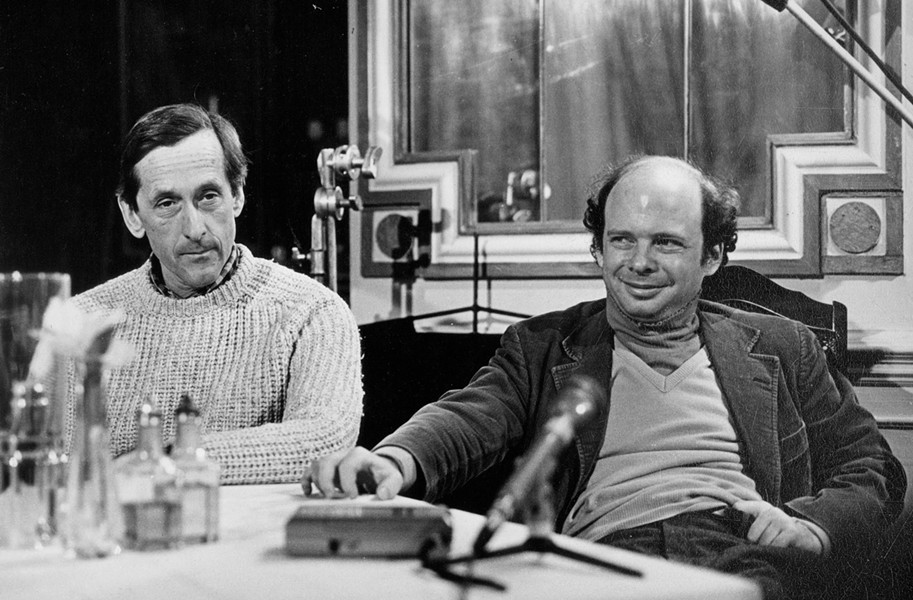 Edwin Slipek André Gregory, at left, who plays himself, the sophisticated title character in “My Dinner with André,” and his co-star and co-author, the more down-to-earth Wallace Shawn, donned ski wear under their clothing to stay warm during the Richmond filming in December 1980.

Recently while heading east on Monument Avenue, past scarred granite stubs at four intersections, I remember the Confederate imagery that once crowned those plinths. Then, passing the Jefferson Hotel I wonder: Do hotel visitors still ask about another icon, the lobby’s red-carpeted staircase where Scarlett O’Hara never fell?

Probably not. “Gone With the Wind” is now relegated to the backlot, joining “The Birth of a Nation” as one of Tinseltown’s outdated missteps.

But seeing the landmark hotel reminds me of a just-published book that a friend recommended. This is a memoir of André Gregory, the New York actor and cutting edge director who co-wrote and played the title role in “My Dinner with André,” a celebrated, if somewhat impenetrable film that was shot at the Jefferson in December 1980. When released 40 years ago, critics Roger Ebert and Gene Siskel couldn’t get their thumbs up fast enough and later named the film one of the year’s two best. “Reds,” written, produced, directed and co-starring Richmond-born Warren Beatty, was the other. In “My Dinner,” two friends, the cerebral Gregory and practical Wallace Shawn, also a playwright and actor, sort of play themselves while dining at a swank Manhattan restaurant. They discuss their respective experiences and life’s great general truths. 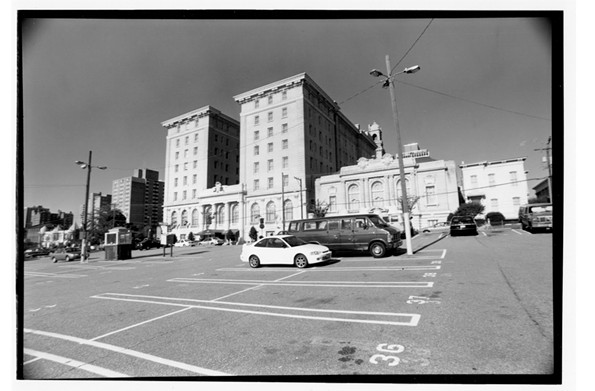 The Jefferson’s marketers have never promoted the hotel ballroom as the setting where all but a few seconds of “My Dinner” were shot. Or that Louis Malle (1932-1995), the celebrated French filmmaker whose other classics include “Lucien Lacombe,” “Murmur of the Heart” and “Atlantic City,” was its director. I wonder if memoirist André Gregory mentioned the two-week filming schedule long ago on West Franklin Street at what in 1980 was a shuttered and dilapidated fleabag.  So I buy a copy of the curiously titled “This Is Not My Memoir,” co-written by Todd London and published by Farrar, Straus and Giroux.

Gregory doesn’t skimp on Richmond. He devotes a full chapter to the challenges of developing, funding and filming “My Dinner with André.” Securing investors was tough, “As if anyone in the world would want to direct a movie written by and starring two unknowns, who sit at a table for hours and do nothing but talk” in “the longest speaking role in the history of film.” He continues, “We set out to determine the perfect director.” Then, he marvels, Malle miraculously appeared out of nowhere.

Money was also an issue. “We had to raise a hell of a lot to make it work. Everyone we approached thought we were nuts,” he recalls. “And where would it be shot? A New York crew would be way out of budget. We couldn’t afford to shut down a New York restaurant for 12 days.”

But, he explains: “Certain projects generate a life of their own.” Writes Gregory: “Out of nowhere the `Atlantic City’ assistant costume designer mentioned to Louis that his father had recently purchased a long-abandoned grand hotel in the Old South – Richmond, Virginia.”

“Out of nowhere,” for crying out loud. I almost dropped the book. 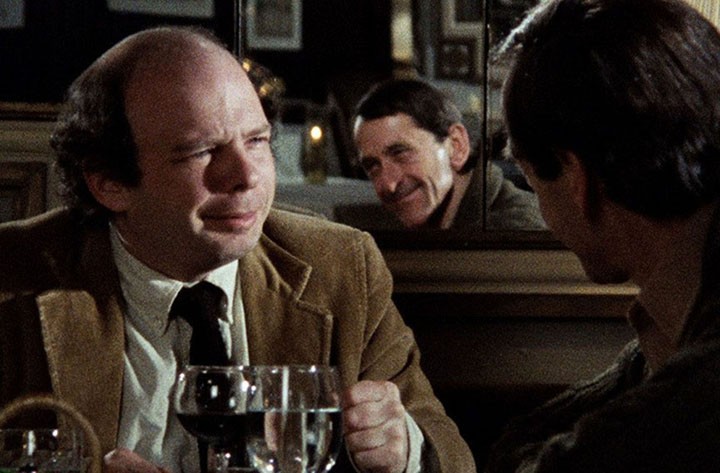 I knew that assistant costume designer, he was a close friend of mine and there was nothing “out of nowhere” about him. He was passionate about André Gregory’s and Wallace Shawn’s script. The late-Jeffrey Ullman, a Richmond native and Douglas Freeman High School graduate, was an on-the-rise New York costume designer for stage and screen in 1980 who’d previously worked closely with Shawn on a number of productions. Ullman and I’d known each other since we were teenagers. His father, Stuart Ullman, had definitely not purchased the Jefferson but was in the wholesale grocery business. Calling me frequently from New York or nagging me when visiting Richmond, Ullman urged me for months to read the script and pass it on to a Richmond couple, Andrew and Virginia Lewis, as possible investors. Some backing had been found, but more was needed. The husband was the president of Best Products and my boss at the former catalog-showroom merchandising company. The Lewises were highly supportive of contemporary culture and especially keen on cinema. In the late 1970s, they’d optioned “Even Cowgirls Get the Blues” by former a Richmonder, novelist Tom Robbins, to translate into film.

I was hesitant to play go-between for Ullman for what I found to be a pretentious script and my boss and his wife. But my friend pressed. When I couldn’t take it anymore I gave them the script. Within a week the Lewises said that they were interested. “The script was way out there,” Andrew Lewis said recently. “But we liked it. We also thought: ‘No way will this make any money.’” The budget was about $400,000.

Boom. Soon, George W. George, one of the co-producers arrived here to meet with the Lewises. What kind of name was that? Kind of a cool one, we would learn. George’s father was Rube Goldberg, the famous cartoonist who wove complicated gadgets into many of his drawings. He was also a Pulitzer Prize-winning political cartoonist. His work was so controversial during World War II that, after receiving hate mail, he shielded his two sons by legally changing their last names. Thomas chose his brother George’s name. Where did that leave George? “He said he wanted to continue being his brother’s brother,’” recalls Andrew Lewis. Voilà – George George.

A sophisticated showbiz pro, George’s résumé included movie successes involving such Oscar-winning actors as Sandy Dennis, Alec Guinness, Gene Hackman, Elizabeth Taylor and director Robert Altman. His 1963 Broadway musical, “Ben Franklin in Paris,” starring Robert Preston, had been a hit. But “Via Galactica,” a 1972 musical set in outer space, not so much-- it was Broadway’s first production to lose $1 million. 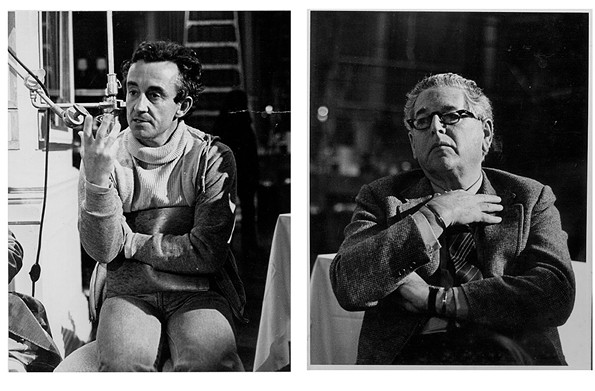 With an eye to the tight budget of “My Dinner,” I suggested to George that perhaps the boarded-up Jefferson would be available for filming. It was no Café des Artistes, the West Side New York landmark where the action occurs, but hey, that’s what set designers are for. I contacted George Ross, a Richmond developer and friend who was considering restoring the old hotel with Carole Hochheiser Ross, his interior designer wife whose impressive portfolio included redecorating Manhattan’s St. Regis Hotel. Ross generously handed over the keys.

Of course, Jeffrey Ullman was costume designer. Think a thick sweater over thermals for André: It was cold and the Jefferson had no working furnaces.
To prepare “the dinner” we contacted Chris Gibbs, a Richmond top chef and caterer, who owned two fine restaurants, Gatsby’s and Fifth Avenue. He had to prepare the same meal each day for shooting.

“A couple of times I went along with Chris when he delivered the [Cornish] hens so I could catch a glimpse of the set and see what was going on,” writes F.T. Rea, the manager of the former Biograph cinema on West Grace Street, in his Slantblog. “The continuity people on the set had to then pick apart Chris’ work to make the look of the plates in front of the actors match the point in the film in which the scene would appear.”

One mid-afternoon toward the end of the shooting schedule the media was invited to the set in the Jefferson ballroom for face time with writers and actors Gregory and Shawn, director Malle and producer George. Afterwards, I’d arranged for an early dinner for the crew at the Track, a casual but fine restaurant in Carytown. Gregory and Shawn stayed behind to work on their lines. To persuade Chris Lyles, the owner and chef to open early for this special meal, I’d dropped Louis Malle’s name.

“Oh, he’s just recently married Candice Bergen, right?” he responded enthusiastically, hoping the world-famous fashion model and recent Academy Award nominee would soon walk through the door of his establishment. I said that yes, Bergen and Malle had married that autumn but she wasn’t in Richmond Her TV role as “Murphy Brown” was in the future. 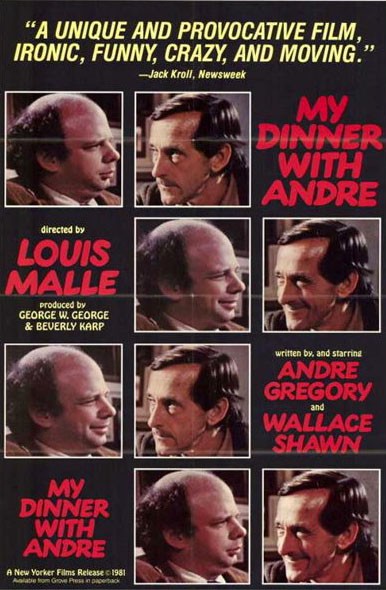 The meal itself was chicken, salad and a rich dessert, I think. Malle was quietly charming and flashed a shy grin when anyone mentioned his 34-year-old bride -- he was 48. “We have only been married a few weeks and here I am alone,” he said in an accent that struck me as more European than his native French. He was polite enough not to say “alone filming in a chilly, musty hotel.” He spoke mostly with producer George during the meal.

But even without Bergen, I enjoyed my dinner with Louis Malle, and have always been awed by Jeffrey Ullman’s determination to have his hometown host the filming of what became a classic film.

“My Dinner with André” had its Richmond premiere at the Biograph followed by a benefit for the Anderson Gallery at Virginia Commonwealth University. Seated in the theater, I caved in and was mesmerized by the actual experience of watching the film, as well as the mastery of the performances and production.

And the movie went on to become a commercial success. Says backer Andrew Lewis: “Ginny and I invested in three motion picture projects and that was the only investment in which we made a return.

“For years afterwards, we received a small royalty check.”