Dark Star Orchestra percussionist Rob Koritz on how far the band is willing to go in re-creating the Grateful Dead experience. 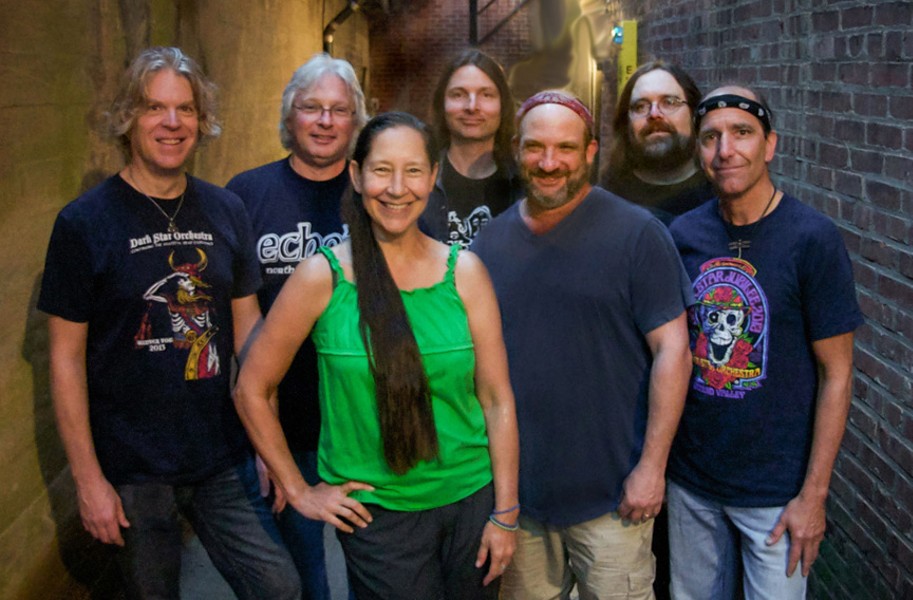 Smell the patchouli from here? Dark Star Orchestra drummer Rob Koritz stands to the right of vocalist Lisa Mackey, who sings the parts of former Grateful Dead backup vocalist Donna Jean Godchaux. The band has been called one of the best tribute acts in the country.

With eerie precision, Dark Star Orchestra performs the noodling, stratospheric jam music of the Grateful Dead, that American psychedelic institution active from the mid-'60s to the mid-'90s, when reluctant leader Jerry Garcia died from a heart attack brought on by years of cigarettes, heroin and hot-dog abuse.

The Dead have always been popular in Virginia, even though Richmond City Council banned the group after a Coliseum show in 1985 resulted in hundreds of arrests — a move roundly applauded by police and the punk community.

For the past 17 years, Dark Star Orchestra has kept the spark alive, playing 130 shows or more a year. It's surpassed the number of shows the Dead played in its entire 30-year career. The group returns this weekend for a two-night stand at Pocahontas State Park in Chesterfield, where on Friday, Aug. 1, it will re-create a special 1973 show from Roosevelt Stadium in Jersey City when the Dead was joined by the best opening act ever, the Band, for Garcia's 31st birthday.

Dark Star will be accompanied by Band tribute act the Weight, featuring former sidemen who toured in later versions of the Band and Levon Helm groups. This is only the fourth time the band has announced ahead of time the specific show it's recreating, so Style Weekly called drummer Rob Koritz, who handles the role of Mickey Hart, who did the original score for the "Twilight Zone" television series, to see what gives.

Style: Were you worried the first time you played Richmond that you would be arrested for playing this music?

Koritz: No! [Chuckles.] I wasn't really familiar with that. But Richmond is a fabulous market for us, for years. We did the first show at the National when it reopened. It's a fun place to play. We're very excited and hopefully it won't be 110 degrees.

Do you have the same problems with fans getting arrested?

On occasion. We're still small enough that it doesn't become a factor. We don't do a huge amount of multinight camping events. Our ultimate goal is to play 100 shows a year. Less shows, bigger venues, is the goal of every band out there, but it's a hard one to attain.

Do you guys even re-create the Dead's concert riders? I read last night that its crew used to demand Perrier water for their dogs — and Garcia would blow a gasket if someone upgraded his stadium hot dogs.

No, we have our own dietary needs. I remember [Dead keyboardist] Vince Welnick telling me he had a new stereo system ordered to his tent — then sent it home to his house. Some bands put disposable diapers on their rider and save the extras. We just ask for fruit and vegetables, cheese, and one local item, with no definition. Sometimes it's a soda made in town, or maple candies.

Or a pound of brownies? So you won't be re-creating the salad bowls of cocaine the Band once had backstage?

Yeah, we have to stay away from that. It's funny: People have asked us if we take the same drugs they did. First of all, who would want to? But we play '70s one night, '80s another night. Without sounding crass, you know, it's a job.

How do you answer critics who say that re-creating shows is a direct contradiction to the Dead's improvisatory nature?

First of all, I don't deny anyone criticism. But the Dead did not come onstage without knowing at least part of what they were going to do that night — maybe it was written on a matchbook. What matters is the music. And we're not contradicting it, because we're still improvising. We don't play the songs note-for-note — that would be defeatist. It would also be impossible; it would take months to get one show down.

Have you ever talked to Mickey Hart about being him?

Yes, on a couple occasions. For him it’s bigger than talking about the Dead, it’s about the spirit and the sound. I’ve played side by side with him and his band. He didn’t get [DSO] at first, I think he thought we regurgitated things. But once we talked he got that we were improvising and playing from our souls. I think he’s cool with it now.

What made this 1973 show so special, besides the Band?

Well, the Bridge is an original band from Baltimore. We keep making them get back together because we love them. I have not heard the Weight yet. But Levon is one of my all-time heroes, nobody played like him. Pure American soul. His sound was so perfect and loose for that swampy, greasy music.

I hung out with him at Bonnaroo backstage, and it was one of the highlights of my life. He said: "It's not about what you do or how you do it. It's about how it feels, does it feel right for the music."

We just got a new bass player, Skip Vangelis, who has really stepped things up musically. We're happy right now where we are, playing well. … It's gonna be fun to see how [the Weight] do Levon.

Do you have to deal with tribute groupies?

There are people who see multiple shows, sure. … Some of them have become good friends. Guys who I'll play golf with on my days off on tour. … I want to say to the fans, please take care of the scene, we don't want this to be a one-shot deal. That's up to the fans. Let's respect the scene and everyone around us. S

Dark Star Orchestra performs "A Verry Jerry Birthday Bash" with the Bridge (Saturday) and the Weight at Pocahontas State Park in Chesterfield on Aug. 1 and 2. Tickets range from $20 to $40. Tickets are available through ticketstobuy.com.

"Going Back to Memphis"

"Loving You is Sweeter Than Ever"

"I Shall Be Released"

"Night They Drove ‘Ol Dixie Down"

"Across the Great Divide"

"This Wheel’s on Fire"

"Life is a Carnival"

"Up on Cripple Creek"

"They Love Each Other"

"Me and My Uncle"

Eyes of the World"

"Goin’ Down the Road Feeling Bad"