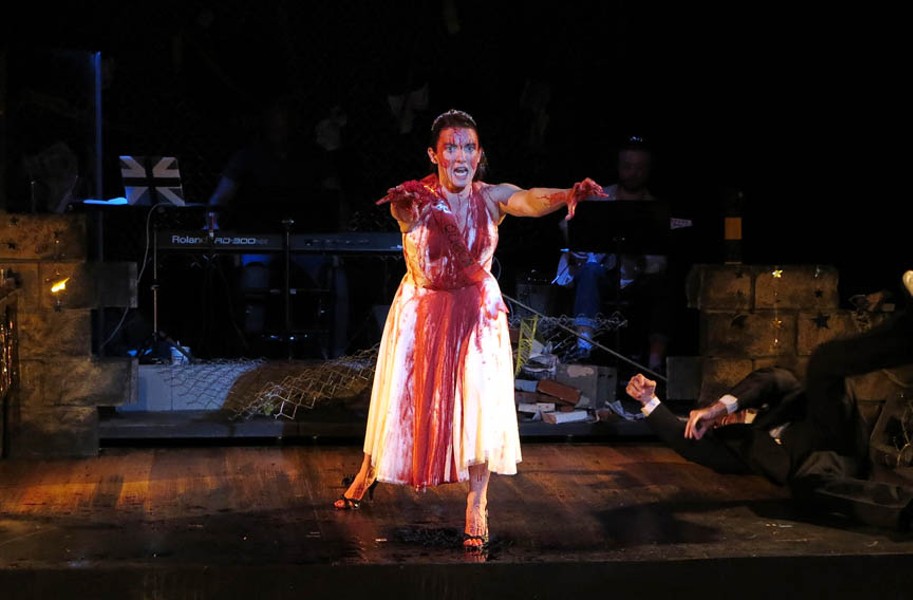 As currently staged by 5th Wall Theatre Company, the musical version of Stephen King’s breakout novel illustrates how a couple of key performances can raise a good but problematic script into a vibrant, gripping, satisfying theatrical experience.

Playing the troubled teen Carrie, who has discovered she can move things with her mind, Brittany D. Simmons creates a complex mix of fragility and strength in her characterization, both anchoring and bolstering this production. With striking auburn hair, pale skin and sharp blue eyes that often seem to be pleading to understand her predicament, Simmons uses her stellar vocal talents to express overwrought emotions that eventually bust into telekinetic mayhem.

Unlike the book and movie versions of this story, “Carrie the Musical” is less about “powers” and more about power, specifically the changing power dynamics in a couple of key relationships. Carrie’s latent abilities emerge after she has her first menstrual period during high school gym glass, a painful scene that leads to merciless taunting by her classmates.

Recognition of her new powers allows Carrie to finally stand up to her mother (Broadway vet Andrea Rivette) whose religious fanaticism fuels an overprotectiveness that slides into emotional and physical abuse.

The gym class incident prompts a crisis of guilt in Sue (Emily Sargeant) who then defies a fellow mean-girl ringleader, Chris (Grace Mincks), by trying to befriend Carrie. When Chris ends up being banned from the senior prom, she plots an epic prank to embarrass Carrie, prompting the tragic finale.

Brandishing her sexuality like a weapon — assisted by spot-on, midriff-baring costumes by Laurel Maughan — Mincks delivers a ferocious portrayal, her vocals as captivating as her character is cruel. Sargeant provides a kind-hearted counterpoint, particularly when she convinces her nice-guy boyfriend, Tommy (Sean Dunavant), to ask Carrie to the prom.

Those expecting pyrotechnics will be disappointed: the special effects director Billy Christopher Maupin has mustered are relatively low-tech and low-key. Instead, the fuel that powers this story comes from the teen angst that Maupin’s young cast captures expertly, performing engaging songs penned by Michael Gore and Dean Pitchford, the team behind songs in the popular movies “Fame” and “Footloose.”

The production isn’t perfect: The kisses the teens exchange are often so violent you expect them to draw blood. And the big finale isn’t explicit enough in dramatizing the fate of key characters. The actors go without microphones so a few lines and lyrics delivered by less-powerful vocalists are lost. These deficits are balanced by an excellent three-piece, onstage band led by music director Anthony Smith and spry choreography by Emily Poff that maximizes the impact of Maupin’s immersive staging, the audience surrounding the action on three sides.

One testament to the effectiveness of this production is the difficulty in singling out just one standout moment. The show is peppered with powerhouse duets: Simmons and Rivette duel as mother and daughter; as an empathetic gym teacher, Katrinah Carol Lewis encourages Simmons to look past high school drama; and Simmons and Dunavant sing about transcending stereotypes. The common denominator is Simmons, a veteran of numerous local productions, who has clearly come into her own with a performance that ranks as one of the year’s best. S