Tale from the Crypt 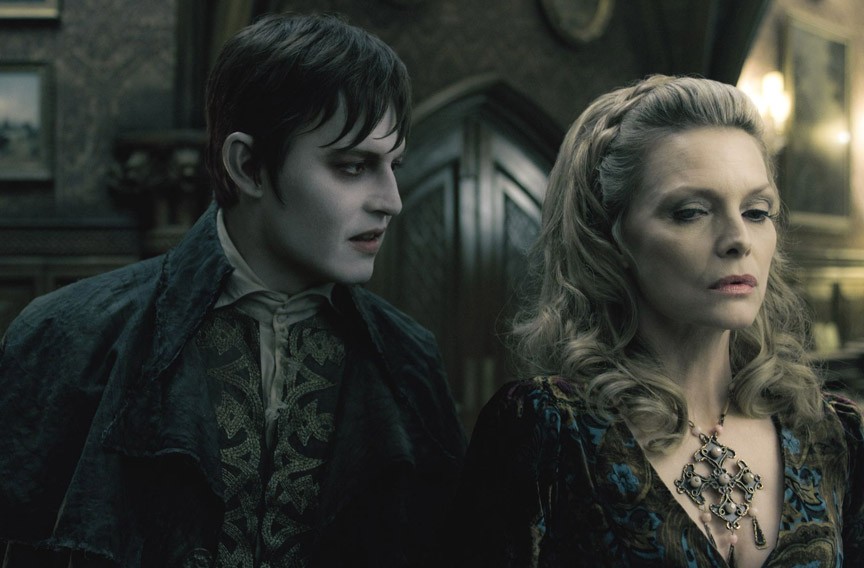 Poor Barnabas Collins. First made a vampire against his will, then sunk into an ironclad coffin deep into the earth to wile away two centuries. We can feel his pain, having waited almost as many decades for a really decent pairing of Tim Burton and Johnny Depp, director and producer-star, respectively, of "Dark Shadows," which tells Barnabas' story, and tells it well. In the words of Master Collins, hasten to the nearest house of theatricals and see it twice, perhaps thrice. 'Tis well worth thy coin.

The film is based on the "Dark Shadows" TV show, which ran from 1967 to 1971. Quaint compared to television today, in concept there may never have been anything weirder than this soap opera with vampires. Think "The Guiding Light" retooled by Dario Argento. Burton's version is a comic reanimation of the main characters. Little of the ponderous, serial soapy-ness of the small screen remains, overhauled and streamlined into a big-screen battle of good (or at least sort-of good) versus evil, long on laughs and gorgeous visuals but, like most Burton films, short on character and feeling.

It tells of the return of Barnabas (Depp) to the Collins family estate, built in Maine by his illustrious family and their fishing fortune. After 200 years, Barnabas finds that times have changed. Really changed — the main plot is set in motion one year after the TV show ended. Whether a subtle nod to the program's afterlife in syndication or just capitalization on a more endlessly trendy decade, Burton and screenwriter Seth Grahame-Smith play Barnabas' re-emergence in the 1970s to much comic effect. You can see the man-out-of-his-element jokes coming a mile away.

Amazingly most of it works. Depp, who might also be accused of lacking depth, perfectly plays Barnabas as a manor-born vampire trying to make his way in semi-contemporary times, where he thinks Alice Cooper the ugliest woman he's ever seen and continuously talks in anachronistic 18th-century-speak. Fresh from the grave and wandering in the dark across the "most strange surface" of a paved road, he stares down his first set of headlights with a defiant order to "show yourself Satan! — mark me not with your strange luminescence!"

That's pretty much how "Dark Shadows" goes for its first half, as Barnabas reconnoiters his estate and the surrounding town. Former secret chambers reveal badminton equipment. Barnabas recoils at the sight of iconic '70s plush toys and demands to know how a "tiny songstress" (Karen Carpenter) vexes the talking box in the living room. Since it isn't our times, the gag is doubled: We get to see an Industrial Revolution-era man startled by the very things that also seem eccentric about the disco era to us. And Barnabas is an anachronism within a happening of anachronisms — the movie a hodgepodge of hippies, hot rods, and hip-huggers. Anything groovy gets a plug, regardless of its place in the decade.

The contemporary Collins clan's reaction to Barnabas' return adds to the charm. Only Elizabeth (Michelle Pfeiffer), the head of the household, knows Barnabas is a vampire. Everyone else, including the wryly rebellious and smart-aleck children (Chloë Grace Moretz and Gulliver McGrath), learns bit by bit, the most enjoyable episode involving a drunken family physician (Helena Bonham Carter), who takes increasing pleasure in doctor-patient confidentiality between herself and Barnabas. He loves the current governess (Bella Heathcote) but also can't resist another wild night with Angelique (Eva Green), the former servant girl and witch who ruined Barnabas and now runs the town.

Barnabas' weakness with women is his doom, and Burton's film eventually climaxes in its inevitable battle among the oldest soul mates in the film. Even though it sticks to the formula of a mainstream thriller, the movie's ceaseless wit retains interest.

Depp reportedly claims to have wanted to be Barnabas since childhood, ever since seeing Jonathan Frid embody him on TV (for 594 episodes!). It could be exaggeration or outright movie hype, but affection of some sort for the material comes through the production, which is ravishingly beautiful and often extremely amusing. "Dark Shadows" is more fun and funnier than all of the "Pirates" movies combined, and it's director Burton's best effort in many films. There's almost nothing to sink your teeth into as far as real emotion, but that shouldn't be all that surprising. The last time we saw Burton and Depp work this well together was in 1994, with "Ed Wood," and without Martin Landau the results might have been just as wise-crackingly empty. (PG-13) 112 min. S