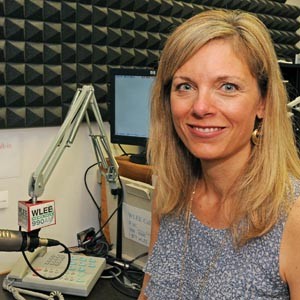 For five months Lynne Hughes was silent. Now she's ready for Richmond to hear what she has to say.

Hughes was forced out of Comfort Zone in October after a controversial dispute with the board of directors about how the fast-growing nonprofit should be managed. Hughes founded the organization in 1998 to send bereaved children to camp, drawing on her own experience of losing both parents when she was a child.

“It was sad that it ended for me,” Hughes says of her work with Comfort Zone. “It was a great time in my life. … But we had differences about how to move forward.”

After Hughes left, she retreated to do some soul-searching and networking. Now, she says, she's “nervously excited” about the opportunity to reach more people with her new gig.

It's been at least a decade since the station had a local female host on weekdays, says Jim Jacobs, general manager of WLEE and three other AM stations. Dr. Laura Schlessinger's syndicated show had performed well in that slot, Jacobs says, so WLEE was looking for something along those lines. Hughes will replace the “Dennis Miller Show,” which will move to 6 p.m.

Hughes had long wanted to be the host of a show dealing with grief, she says, but realized she needed a broader focus on relationships and transitions. Her show, airing from noon to 2 p.m. on weekdays, will be a mix of issues serious and lighthearted; home-schooling, “mommy guilt,” marriage, divorce and hairstylist horror stories.

And she'll interview notable locals. Her first guests included lawyer Shena Dixon Mason — who has been a magistrate, a bail bondswoman, an advocate for legal literacy and Mrs. Richmond — and Jill Fitzgerald, a therapist and grief counselor.

For talk radio fans, she'll go up against Limbaugh — which doesn't worry Hughes too much. “Rush does what he does, right? And he does it well,” she says, but there's room for other topics on the airwaves.

Hughes' ultimate goal is syndication, which WLEE has done before, Jacobs says. Local host Jack Gravely, as an example, is poised to get his show on a second station.