Lamb of God’s Randy Blythe helps a friend leave his demons behind in new work at the Richmond Ballet. 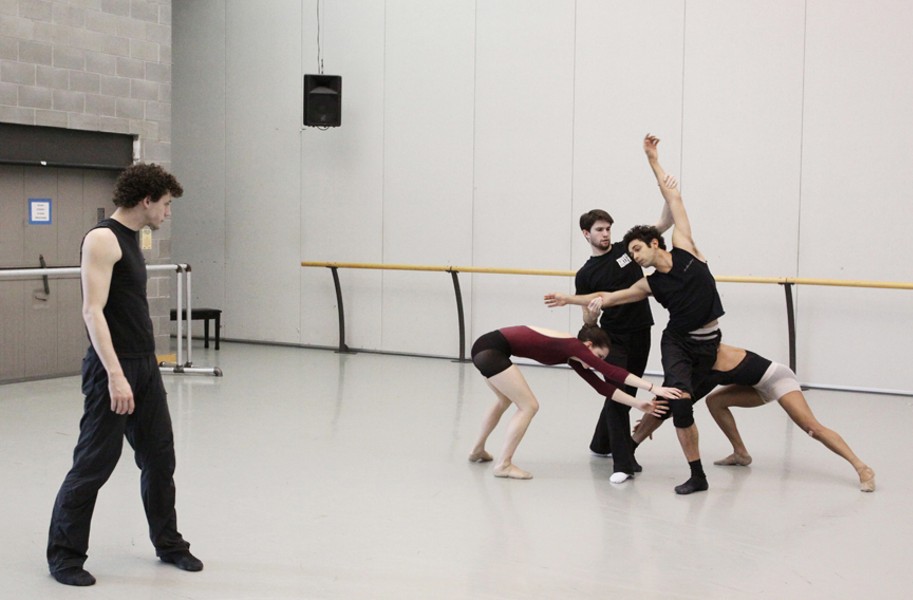 Richmond Ballet dancers Fernando Sabino and Trevor Davis face off and begin to dance, watched intently by choreographer Matthew Frain. The music builds to an intense, dark wall of sound, a stark difference from the classical pieces usually played in the studio.

The name of the conceptual, contemporary ballet work is “Inventory.” It’s about something both Frain and Blythe have experienced firsthand: the pain and reward of coming to terms with alcoholism and living sober.

“Matt and I are close friends, as well as artists and entertainers, albeit in two very different fields that don’t generally cross over,” Blythe says by way of email from a plane to Indonesia, where he’s performing with his band, Lamb of God. “So on a personal level, this collaboration gave me the chance to bridge that gap between our two worlds and work closely with a friend. As an artist, it gave me a chance to make music very different from what I do with my band and to share that music with a different sort of audience.”

Heavy metal, ballet and alcoholism: With New Works Festival 2015, Stoner Winslett, artistic director for Richmond Ballet, isn’t kidding about her mission to further the evolution of the art form.

“I like to let people try things that other people won’t let them try,” Winslett says.

When Frain stops the music after a few minutes, he works with Sabino on finessing a movement. The communication between them mostly is nonverbal. Frain, also a company dancer in his third season with Richmond Ballet, shows the dancers what he wants with his own body. He asks Sabino to try on a jacket of his, testing a potential costume. Sabino flexes and says it’s too tight.

“Or me too powerful,” Sabino shoots back.

Frain starts the music again, and the dancers, also including Elena Bello and Sabrina Holland, run through it. Frain is allotted 25 hours of rehearsal time to set his 15-minute piece on the company dancers, as are the other three choreographers premiering their work at the festival.

Frain is a longtime fan of heavy metal. And while Blythe may not be a balletomane, he’s attended some performances.

“While I am a very physical person when I perform onstage,” Blythe says, “my physical expression is very spontaneous and highly undisciplined compared to that of a ballet dancer. I appreciate the lengthy, brutal, sustained effort required of dancers to effectively turn their bodies into the kinetic tools of their trade. It’s a physical medium where skill and art intersect in such a beautifully expressive way, and it doesn’t come easily to those that pursue it. I respect that.”

Frain describes “Inventory” as a “dark and uncomfortable” work.

“It kind of comes from a point where I had to take an honest look at how I was living my life,” he says. “Not only in the mirror, but looking at [myself] emotionally, spiritually and mentally, and seeing things how things really were.”

His alcoholism nearly caused him to quit dancing, Frain says: “It was something that wreaked havoc in my life and sapped me of any of the passion and love that I have for what I do for a living.”

Substance abuse isn’t uncommon in the dance profession. “I wasn’t sure if I could do it,” Frain says, speaking of his attempt to stay sober. “Randy told me one night, ‘I know what it’s like to be this artsy person and have to do this, it can be really tough.’ I had a few weeks clean. He said: ‘You can do this. It’s possible for you to do this.’ He’s been a very inspiring person for me.”

Both Frain and Blythe found that alcohol and drugs ultimately robbed them of their creativity. “There is absolutely nothing genius about being a common, run-of-the-mill drunk or junkie,” Blythe says. “The artistic bag of tricks runs dry fairly quickly, and then the subpar repetitions begin. There aren’t a lot of heroin success stories, you know? Exceptions to the rule are very few and far between; for every Keith Richards, there are a thousand body bags, and the cold, hard truth.”

Winslett saw Frain’s potential as a choreographer last year when he did a piece for the New Works II festival, with the second company. Blythe also composed the music for that work, named “Solution.” This time, Frain is setting work on the professional company dancers. “It’s something I wouldn’t have the mental capabilities to do it if I wasn’t sober,” he says.

Blythe will return from the Lamb of God tour in time to see “Inventory” onstage. “I hope our collaboration will persuade some people who normally would not attend the ballet to come out to the festival,” he says. “See our creation performed, and perhaps gain a new appreciation.”

Frain says he has to pinch himself about the opportunity. “This must be a weird dream I had back in high school about something that will never happen,” he says. “It’s been wonderful.” S

“New Works Festival 2015” runs through March 22 at Richmond Ballet Studio Theatre. Tickets are available at eTIX.com, by calling 800-514-3849, or by visiting the Richmond Ballet box office at 407 Canal St.