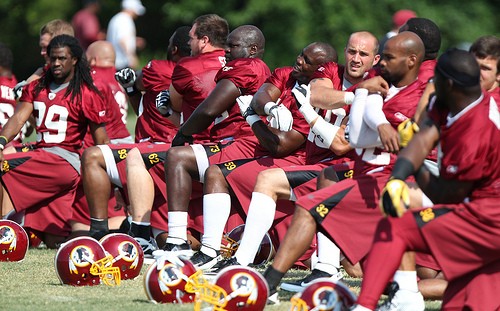 The Redskins’ training camp fiasco can be put to rest -- at least for now -- and Mayor Dwight Jones can move on to bigger and better things. His poverty reduction plan certainly must be just around the corner, along with his 15-point strategy for fixing the city’s grossly underperforming schools. Or not.

But let’s not digress. ’Tis the season to celebrate, especially if you’re the Washington Redskins, who should have a place to practice next summer behind the Science Museum of Virginia, assuming there are no unexpected snafus at City Hall. That never happens.

There are some significant take-aways from Monday night’s City Council vote, which in essence paves the way for the city to build the Redskins a $10 million training camp.

First, it’s a better deal on the surface. Bon Secours has agreed in principle to kick in an extra $2.6 million to allay concerns that the city gave the Westhampton Elementary School property at Patterson and Libbie avenues to the hospital chain. The 60-year lease for the property jumps from $5,000 to $33,000 a year and Bon Secours has agreed to contribute $100,000 to the school system annually for 10 years for capital projects. The original deal for the Westhampton came to about $300,000. Now it’s $2.9 million.

Now, the less than encouraging news: If all this is truly new money, what does this effort say about the city’s ability to negotiate economic development deals? If Bon Secours can come up with an extra $2.6 million in the span of two weeks, how much is the city leaving on the table? The Westhampton school property is assessed at $7.5 million. Last week Chief Administrative Officer Byron Marshall told City Council that because of the school building’s limited use, the site’s probably worth closer to a range of $3.5 million to $4 million. Even at the low end, it’s more than what Bon Secours will pay to lease the property and fund school projects (the $2.9 million). Of course, if you wrap in Bon Secours’ sponsorship of the actual Redskins training camp ($6.3 million, to be collected in lease payments for Redskins-related medical facilities) it’s a better deal. That assumes that the two projects couldn’t exist independently of one another, which means one or the other is overvalued. Is it the Westhampton site, or the Redskins sponsorship deal? It’s the kind of thing that City Council should take a hard look at, but chose not to.

And this raises the more serious issue with the Redskins' deal: What kind of precedent did City Council set by approving, at the mayor’s request, a $10 million city expenditure without even the first whiff of due diligence? The city supposedly has agreed in principle to put up a quarter of the costs for a new $50 million ballpark for the Flying Squirrels. That’s a $12.5 million commitment, and the stadium deal has been knocked around for the last three years, in part, because of questions about how to finance the stadium, where to build it and the mayor’s inability to get the city’s regional partners to pony up. The Redskins got their $10 million in what, three months?

Few will argue that playing host to the Redskins summer training camp isn’t a cool thing for the city. Economically there’s no credible evidence that a three-week camp will do much by way of generating significant new spending in Richmond. But it’s good publicity. Robert Griffin III, the team’s quarterback, may just be the NFL’s brightest young star and could well be a major draw. The ESPN trucks will come.

Still, the Redskins’ deal is the very definition of corporate welfare. The team is fronting no costs for the new fields or any of the other facilities behind the Science Museum. Richmond is even paying the Redskins $500,000 a year to help defray the team’s moving costs. And don’t forget Gov. Bob McDonnell’s $4 million gift to the Redskins for agreeing not to move their headquarters out of Loudoun County, which put up another $2 million. The governor agreed to pay the Skins not to leave. In the good ol’ corporate welfare days of, say, the 1990s, Virginia would at least give giant tax breaks and financial incentives to get new businesses to move here. (Yes, one begets the other, but we felt better about it back then).

This is a long way from over. The city has a very tight construction schedule to get the fields and facilities installed by July. And who knows, maybe by then the Redskins will be worth watching again.