Does Virginia check the credentials of textbook authors before it accepts their books? 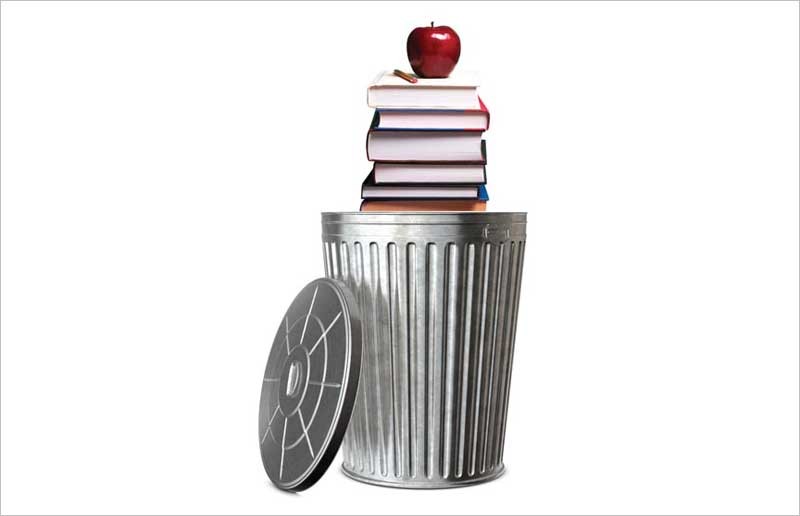 OK, Virginia Board of Education, isn't it about time you pull the plug on Five Ponds Press? The Connecticut company announced last month a new science series, "All About Us," which it will peddle directly to Virginia school districts. This comes after the debacle a year ago over the multiple inaccuracies in two fourth-grade history texts, "Our Virginia Past" and "Our America to 1865," written and issued by the company. Five Ponds Press' newest foible follows the Virginia Board of Education release of its Guidelines for Local Textbook Approval in mid-September.

As with many small publishers, the history of Five Ponds Press is sketchy, but some digging through public records finds that owner and president, Lou Scolnik, is married to its only author, Joy Masoff. The name of the company comes from a road the couple lived on in Waccabuc, N.Y., before moving to a house in Weston, Conn., the current address of the company. The ma-and-pa operation turned up in Virginia around the time the state issued its Standards of Learning requirements, and was the first company to whip out a book, "Mali: Land of Gold and Glory." Because there were no other elementary-level books on Mali, it was snapped up by schools and libraries. Five Ponds Press' website boasts of its tie-in with Virginia standards, the only state mentioned on the site.

Written by Joy Masoff, whose biography states only that her writing grew out of Cub Scout and Brownie troop projects, "Our Virginia Past" and "Our America to 1865" were considered bright, colorful additions to Virginia's approved textbook list. But last year Carol Sheriff, a history professor at the College of William and Mary, perused the Virginia text to find that blacks fought for the Confederacy during the Civil War, telling CNN that such an idea "was equivalent to saying that the Jews helped the Holocaust." Content and technical mistakes in the texts were counted and numbered more than 140. Examples include:

• There was a Battle of Richmond in the Civil War. (The Virginia Historical Society would beg to differ.)

Masoff admitted to researching all her books' contents on the Internet, a statement which set off national tittering picked up by CNN, The Washington Post and Andy Rooney on "60 Minutes." Even the texts' poor spelling was pointed out — "developement," "ammendement," "neccessary" and "seperate." Ronald Heinemann, a former history professor at Hampden-Sydney College, said: "I absolutely could not believe the number of mistakes — wrong dates and facts everywhere. How in the world did these books get approved?" His recommendation: Withdraw the books from the classroom immediately. (Fairfax County approved the revised Virginia text in June 2010.)

Several months ago, in response to the problems, the Virginia Board of Education issued Guidelines for Local Textbook Approval. Appendix A of the guidelines lists an 18-step textbook approval process at the state level. In the body of the guidelines a phrase is included: "If a local school board wishes to purchase textbooks that have not been approved by the Board of Education it must adhere to the requirements of the Virginia Public Procurement Act," which sets forth a best-value theory for procurement purposes as well as a fair-trade option. The guidelines also state that "a publisher of the textbook should certify accuracy of the content — and the publisher should certify that the books meet other requirement of the Code of Virginia related to textbooks." If Five Ponds Press zeroed in on the fair-trade option, a level playing field for its low-cost, colorful and contemporary texts might exist. Taking the procurement act literally, the easiest way around the state accuracy requirement is to promote the new science texts district by district rather than at the state level.

After the experience with the history texts, why is the state allowing a publisher to be the final voice in authenticity and credibility of texts? Five Ponds Press agreed to hire a historian after all the publicity erupted around the history texts, but now it has issued science texts. Will the historian give these books a once-over, or will there be a consulting scientist as well? Joy Masoff is the author of fun titles such as "Oh Yuck! The Encyclopedia of Everything Nasty" and "Oh Yikes! History's Grossest, Wackiest Moments." Does the state check the credentials of textbook authors before it accepts their books?

Businessmen and Cub Scout authors who marry and set up publishing companies, with a history of publishing inaccurate textbooks, shouldn't set a precedent for educational or procurement principles in Virginia.