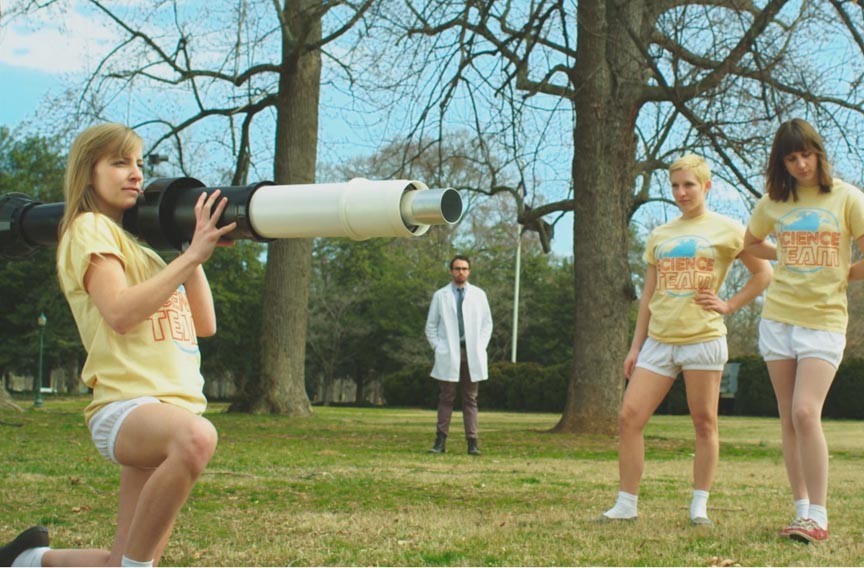 The most requested locally made horror rental at Video Fan is 2010's "The Taint" by filmmakers Drew Bolduc and Dan Nelson, according to a store employee. Video Fan offers it free — though late fees do apply.

The film is distributed by New York's Troma Entertainment, known for its over-the-top, B-movie gore fests, and it pretty much lowers your expectations right off by boasting of "more exploding penises and women getting their heads crushed with rocks than any movie in history." But there also are some fun, campy dialogue and clever low-budget effects. File this one in the so-bad-it's-good section.

Bolduc, 28, studied film and sculpture at Virginia Commonwealth University but dropped out to make movies. After his debut, "The Godening" he wrote, directed, starred in, and scored the soundtrack for "The Taint," a story involving a tainted water supply that sends zombies chasing a platinum blond, mullet-wigged protagonist around the James River. The filmmakers learned to execute the squeamish special effects as they went along. Much of the splatter work feels reminiscent of Gwar's early long-form videos.

"A lot of horror movies have a message or metaphor for society," Bolduc says. "I wanted to make it blatantly obvious while asking, 'Is this above being misogynistic, or is it just misogynistic?' And I didn't want to answer that question."

Playing mostly at film festivals, "The Taint" has racked up good reviews from horror nerds and gross-out fans, developing a cult audience. Bolduc has a website that sells "The Taint" on DVD, Blu-ray and VHS, which horror nerds love, he says, as well the platinum wig and "Cock Skull" T-shirts, among other items. The success of the film helped land him a gig working special and visual effects on the recently released Troma film, "Return to Class of Nuke 'em High" with producer Michele Lombardi.

Bolduc's latest film, the science fiction and horror hybrid "Science Team," is almost ready to drop. He finished shooting around Richmond and is in post-production.

"It doesn't have the love of obscenity that 'The Taint' had," he says. "We wanted the performances to be more real and the comedy more integrated into the story."

The script involves a government agency that is "like the homeland security of dealing with extraterrestrial incidents," Bolduc says. The original idea came from a scene he envisioned of a security official harshly interrogating an alien who sits there like a plant, completely uncomprehending.

"Taint" fans — and they are a sick bunch who should seek help and stay away from sharp objects — may recognize familiar faces such as actor Richard Spencer, the husband featured in a memorable sex scene from "The Taint," which was partially shot from the interior perspective of the wife's vagina. (Not exactly Hitchcockian in its subtlety, but terrifying nonetheless.)

For "Science Team," Bolduc raised half of its $15,000 total budget using Indiegogo. But the real mission of his film company, Buncom Media International, is to help foster Richmond's low-budget film community. He believes the area could be on par with a city such as Baltimore, which features a large horror film community with members who occasionally collaborate on Richmond films, he says.

"The Richmond scene is getting louder," says Christopher Schoen, who just organized the inaugural Virginia Independent Horror Film Festival at the Byrd in September, offering a dozen Virginia horror films for academic discussion. "We want to prove to the public that horror movies have something to share."

Ideally, Bolduc would like to make a movie here every year.

"It's hard to make movies this cheap anywhere else," he says, adding that most local filmmakers make their living through commercial work. "But if you come up with a creative project that's exciting, a lot of those people are just waiting to do something. You get so much more support. In L.A. or N.Y.C., everybody is your competition and just wants to destroy you."