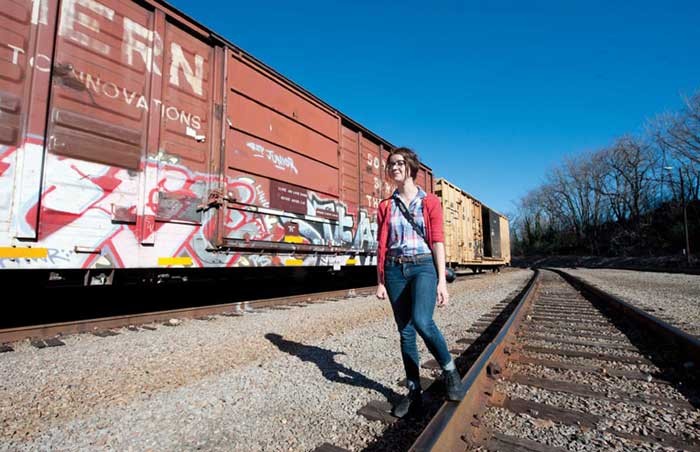 The mastermind behind Graffiti Richmond is a 23-year-old barista named Keeley Laures. You don't know her, but you may have seen her work.

Laures is one of a handful of people in Richmond documenting what's loosely termed "street art" — graffiti, stencils, yarn bombing. Her tools are an aging Minolta camera she received back in high school, a cell phone and a Tumblr blog. A year in, the Graffiti Richmond blog has more than 800 followers.

"It started out as a personal collection," Laures says. "And then I started a blog and things just exploded."

At least twice a week she makes the trek on her bike to those places in and around the city known to be popular with Richmond's graffiti artists. These are the out-of-the-way, somewhat secret spots where people armed with spray paint can take their time and there aren't many people around to alert the police.

Many of those places are on private property, meaning that both the artists and those who document their work — in this case, Laures — trespass each time they do what their mission entails. Today is no exception.

"It's exciting," Laures says while ambling through the small path between two parallel lines of stationary, rust-colored freight cars. "It's like if you're a record collector digging through stacks at a record store and you find something really rare."

The search begins on a recent sunny afternoon at one of Richmond's train yards. Style Weekly promised not to identify which one. Doing this work means being careful not to identify where her photos are taken, Laures says.

She acknowledges that there are particular areas of the city that are widely known as fertile ground for graffiti art. But even those have pseudonyms.

It's the secretive nature of the culture, however, that drew Laures in. "I guess I'm just intrigued by people creating these alter-egos and then not taking credit for their work," she says. "Maybe that's a little too romantic of a way to think about it."

In the train yard, there are literally miles of canvas for the graffiti artists. The train cars are a collage of tags, throw-ups and the more elaborate pieces.

For the uninitiated, a "tag" is the modern-day version of "Kilroy Was Here," a hastily drawn script of the artist's pseudonym. "Pieces," short for masterpieces, are more elaborate, involve more use of color and take hours to complete. "Throw-ups" fall somewhere in-between.

To make the blog, a piece need not be new, Laures says: "It just needs to exist."

Laures first caught the graffiti bug as a college freshman in Macon, Ga. Jean-Michel Basquiat, the man who brought graffiti to the attention of the mainstream art world, became one of her heroes.

She left school before completing her degree, bouncing around Northern Virginia before finally settling in Richmond in 2008. While working on her own art, she began noticing the abundance of graffiti on her walks to and from her job. Then she started taking pictures. Now she's become the doyenne of graffiti photographers.

Asked how rich the street art is, Laures says it's difficult to be certain. "Richmond is a smaller city, but relatively, there are a lot of great artists here," she says. She won't reveal which ones exactly. But there are some whose "names" appear often enough on her blog. Among others, there's "Rebar," "Omega3" and "El Camino," who sent Laures a video of himself painting an intricate, multicolored piece. It's since been posted to the blog.

Graffiti Richmond has become popular enough that artists submit photos of their work directly to Laures. With those connections, she plans the next of evolution of the blog, a series of paper 'zines dedicated to various types of street art.

As for content, Laures says that besides photos, issues possibly will feature artist interviews and ink recipes. "I want there to be some sense of participation by the community, because it is a diverse community," she says. "There's no type of person who's into graffiti or other types of street art. That's what makes it awesome."

Still, creating a quarterly magazine seems daunting for one person to take on.

Not really, Laures says, toward the end of the tour. She points out a tag painted on a squat piece of wood outside a local coffee shop. The word "vice" is painted in bright blue paint. "That's why it won't be so hard to do a 'zine about graffiti," she says. "It's everywhere." S