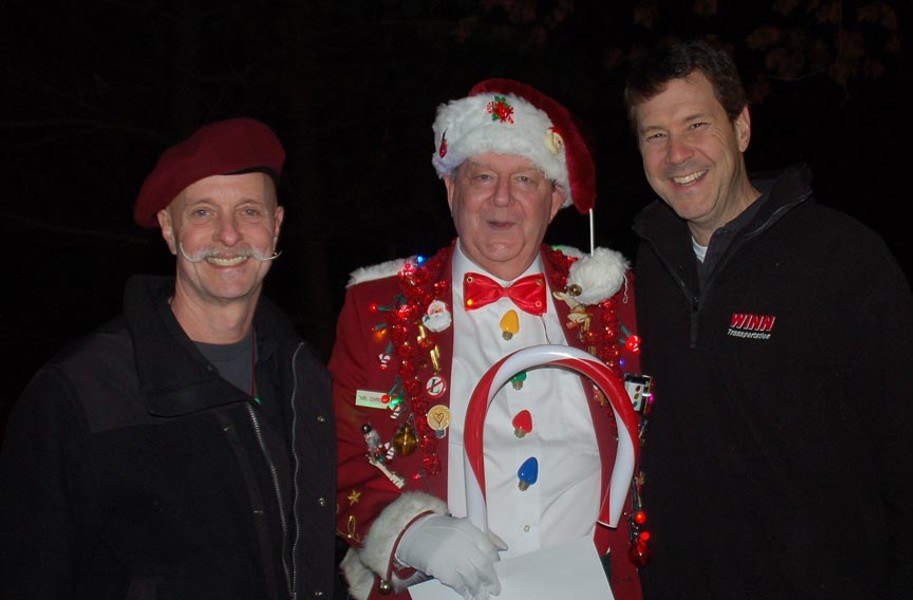 When historians look back on Christmas celebrations in the 20th century, they might draw a line at 1985. Like it or not, that’s when local impresario Barry “Mad Dog” Gottlieb ushered in the epoch of tacky light tours. The holidays in Richmond, and across the country, have never been the same. On Dec. 15, 2010, Mayor Dwight Jones officially proclaimed a Richmond Tacky Light Tour Day.

Gottlieb, who still goes by Mad Dog, now lives in San Francisco and stays busy as a writer and Web designer. He no longer does tacky light tours, but he’s still amazed at their popularity. Last Christmas, USA Today named a Brandermill house as having the best holiday light display in the country. When spectator traffic exploded, neighbors worried about losing access to their homes.

Despite heading West in the ’90s, Mad Dog still relishes a visit to Richmond. While the city was nursing bike-race fever in September, he dropped in for a Good Humor Band reunion show. “Tons of changes, but lots of great people,” he says. “I really miss the arts scene. It’s the best I’ve seen anywhere.”

Mad Dog: This is really tough. Basically, everything about the original tours was great! The first year I announced the contest by sending a press release to the newspapers. I’d toyed with renting one of the trolleys but decided to be brave and rented a bus from Winn Transportation. Six hours after the morning paper came out, the bus was sold out. I added a second bus. It sold out in a day. I got scared and decided to stop there. It was officially called “Richmond’s Tacky Xmas Decoration Contest and Grand Highly Illuminated House Tour.”

So you had a mob on your hands that night?

I told people who kept calling that it was sold out but they should come and follow the buses in their cars. I printed up maps for them. When we left that first night we had two buses and an estimated 100 cars trailing behind us, stretching for blocks. We blocked traffic everywhere we went. People got out of their cars and spontaneously sang Christmas carols. Frank Hudak (now known as Mr. Christmas) got nervous at the crowd and at first thought we were making fun of him. But he realized it was pretty incredible having so many people show up to see what he’d done.

Are any of those light displays permanently burned into your retinas?

When we got to a house that was decorated in all blue lights (which was dubbed the “Sid [Vicious] and Nancy [Spungen] house”), everyone broke into “Blue Blue Christmas.” I handed out homemade trophies to the winning houses. A week before, I’d taken a celebrity panel of judges out and we rated the houses in categories including mass wattage, sheer numbers, incongruity, bad acid flashback and the holy-shit factor. If the first words out of your mouth when you saw the house were “Holy shit,” they got bonus points.

Were you trying to shake up conventional holiday celebrations?

Actually, no. A friend, Gay Chafin (now Gay Chapman) and I got into visiting highly decorated houses we knew of or heard about. Each year we’d learn about a couple of new ones. We knew there had to be more -- and probably better ones -- that we didn’t know about and I decided the way to flush them out was to hold a contest. So I did. The tour part was secondary.

The next year, I added a third bus to the tours. We still had cars trailing behind us. Then I stopped doing it because it was feeling out-of-hand. I held the contest for a couple of years without an official tour. When I started working on-air at WVGO (106.5-FM), they asked if I’d like to bring it back as a station promotion. We did.

Despite your popularity, have any Charlie Browns ever accused you of ruining Christmas?

I don’t think tacky lights have ever been offensive, at least not to me. Maybe to the West End households that have all white lights, plaid ribbons and pineapples on the mantles. Do people still do that?

All along I’ve said tacky is a style. Super ornate, over-the-top, big and wild. But it’s not a negative statement. People love seeing them, and judging by how many people check them out in Richmond each year, how could you call it offensive? Even though I left about 18 years ago, it never fails that each year I get emails from random people asking me for a copy of this year’s list. Yes, I created an X-mas Monster.

Your own house must be monstrously decorated. How do you celebrate Christmas?

Christmas for me is low-key. There are no rituals. What do you want from a long-ago fallen Jewish kid from New Jersey? Actually, other than a string of lights in my loft on Broad Street, I’ve never put up lights.

I will say this: “Miracle on 34th Street” is by far my fave Christmas movie. S