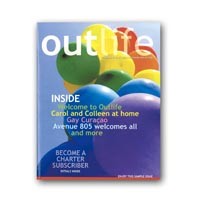 The Richmond Times-Dispatch launched Outlife, a magazine aimed at the gay, lesbian, bisexual and transgender community, this month. But the first issue appears to be the last.

The magazine was published by Richmond Media Group's Targeted Solutions — a division within the Times-Dispatch, spokeswoman Frazier Millner says. But cutbacks caused a change in plans.

“[Richmond Media Group] made the decision not to pursue the publication due to recent workforce reduction that directly affected the department closest to the production of this magazine,” Millner writes in an e-mail, “and the fact that now is an incredibly difficult economic climate in which to launch new products.”

Bob Kelly was listed as editor of the 20-page, glossy, full-color sample edition, billed as a bimonthly. It featured restaurant reviews, apartment profiles and travel advice — as well as a measure of discretion.

The magazine noted that “Inclusion in Outlife does not imply sexual orientation,” and future subscribers were invited to check boxes dictating their delivery options marked: “I am out, proud and green! Please deliver Outlife wrapper-free” or “I prefer to receive Outlife in a plain envelope. But I promise I'll recycle the envelope!”