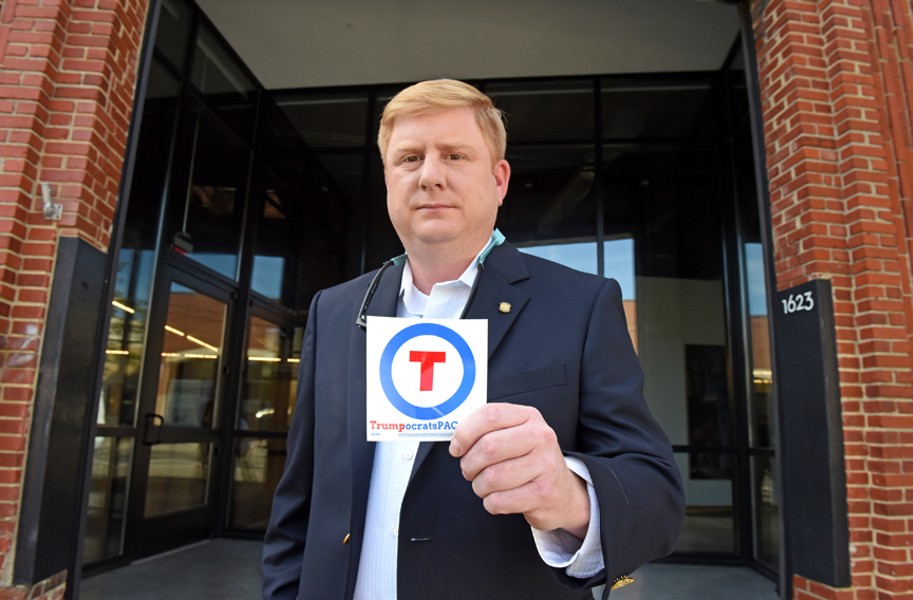 Scott Elmquist A lifelong Democrat, Christian Rickers says he’s turned into a Trumpocrat — and has been landing national interviews about it.

Despite reports last week that the Donald Trump campaign moved some of his paid campaign staff from Virginia and polls showed him in dire straits behind Hillary Clinton here, Rickers isn’t convinced the race is over.

“We’ve got people working everywhere,” he says. “The Trump campaign has been sort of a ragtag army from the beginning, a loose confederation. Whereas the Clintons are a more traditional political machine. We’ll see what happens.”

Since unsuccessfully supporting Bernie Sanders in the Democratic primary, the 40-year-old Fan resident has become an outspoken member of the self-proclaimed Trumpocrats — Democrats for Trump.

Like crossovers the other way — Republicans siding with Clinton — Rickers’ unconventional stand has caught attention. The lifelong Democrat from Kenbridge has been busy stumping for the Republican nominee on such national outlets as Bloomberg, Fox News and Fox Business.

Rickers: I own a car business in Kenbridge. And in Richmond I have a business called Trash Fairies. It’s like the tooth fairy of trash — we do a valet trash pickup at thousands of apartments around here, and in Nashville, Raleigh, Charlotte, Virginia Beach and Fredericksburg.

They’re independents and Democrats who are blue-collar, hardworking people, who are worried about their job, worried about their family, want our country to focus more on issues at home, on protecting American companies and jobs, bringing back the ones going overseas.

You worked for Democratic vice-presidential nominee Tim Kaine back in the day?

I’ve been my county Democratic chairman for 22 years, starting when I was 18 years old. I started going to Democratic committee meetings when I was 5 years old. And I’ve been on the Virginia Democratic State Central committee for many years. I was the vice chair of the 5th Congressional District for the Democratic Party, up until recently. ...

I was appointed by [Gov.] Mark Warner, after I graduated from Hampden-Sydney College, to the Department of Housing and Community Development as a special assistant for policy. I worked there for several years and continued that when Kaine was elected. I’ve worked for every Democrat that’s ever run for office in Virginia, forever. I was the 2012 delegate to Democratic National Convention for Obama.

When did you start supporting Trump?

When Bernie Sanders dropped out of the race.

Did you get any negative reactions from the people you’d worked with?

A little bit. I took down my Facebook page so I wouldn’t be driven crazy by constant posting. … I’ve heard some people are really upset with me. But everyone’s entitled to their opinion. Some people have called, good and bad. Some people are thrilled. I’ve had my [Central Lunenberg] High School principal leave a minute and 45 second long voice mail two days ago, telling me how proud he was of me, thought I’d been doing a good job, making a lot of sense.

I think the world of Tim Kaine. He’s one of the finest public servants, such a nice, reasonable guy. He’s likable, he’s nonconfrontational up until now. I don’t know what’s happened — the Clintons want him to be an attack dog. I don’t think that’s working well for him.

He’s anti-establishment, trying to shake things up in Washington, bring our jobs back, stop the corporations from taking jobs overseas, stop these trade agreements that Clinton has been supporting over the years. The gap between the rich and the poor continues to increase. ... We’ve gutted out what the middle class traditionally has been able to accomplish and now we’re left with a lot less, and a lot more burden. ... The squeeze is on. People can’t go to football games, NASCAR races. Everything is so much more expensive than it was. People are hurting. I think Trump has a very similar message.

Don’t Sanders and Trump have different approaches to solving those issues?

The central premise is the same: They want to focus on the problems in our country, not problems all over the world. How they go about doing it remains to be seen. We do know if Hillary Clinton is elected, she’d going to do pretty much the same thing as what we’ve got right now. We’ll continue this gridlock and supporting corporations and globalist policies.

Kaine isn’t running — she is. He’s adjusted some of his positions to match hers. I don’t know that you can say Kaine and Clinton are similar on their positions, because Clinton has changed her position on almost every single issue in this election. I would not put Kaine in the same category as her.

Trump has also said some things …

But he’s never run for public office before. He never had a platform. It might have been what he said, but he was also a businessman and entertainer, who had to say things to promote his career. Being a developer and entertainer, that’s not the same thing as running for office, where you have to decide on what is right for a country and what your position and platform is. It’s totally different.

Is it hard to be a Trump fan?

He says some crazy things. I think it’s awful some of the things he’s said, but talk is cheap and action is different. They’ve both been in the gutter. The Clintons have a long history of doing a hatchet job on their opponents and digging up information and exploiting it. It’s just been terrible to watch.

But I go back to the core of it: Let’s not talk about the sleaze, let’s talk about where you stand on issues, what you’re going to do to make the country better and improve people’s lives. None of these sex stories are going to create a single job, not going to build a single bridge, or pave over any roads. It’s just garbage to distract people from what’s important.

Did you vote for Bill Clinton in ’96?

Halloween 2015, you dressed as Trump. Is that right?

Were you making fun of him then?

I tell you what, I was intrigued by what he was doing and saying. I was paying attention. I was having fun with it. People thought it was funny, but I wasn’t making fun.

Are you trolling us? Are you really going to vote for Trump?