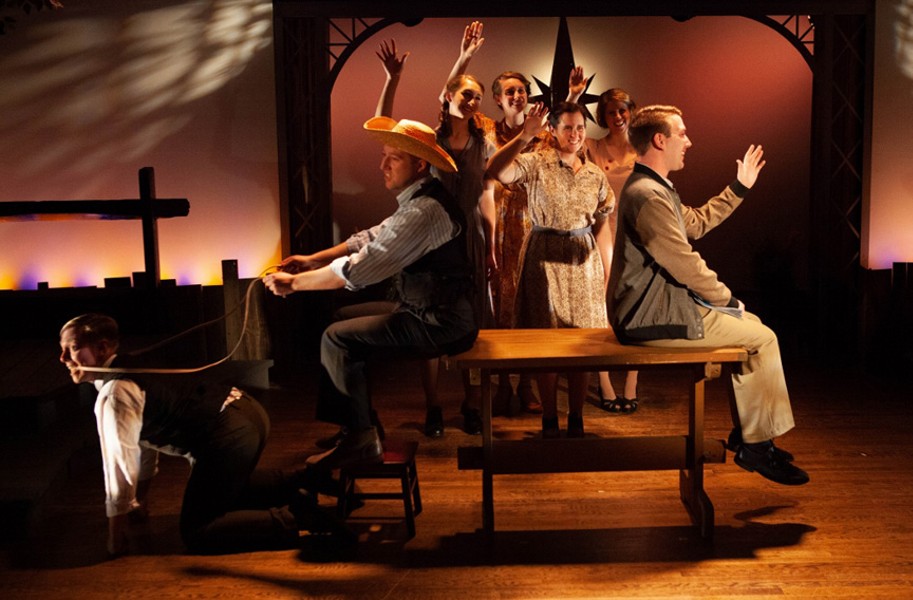 Based on the American folk ballad "The Iron Mountain Baby," Steve Martin's and Edie Brickell's musical "Bright Star" covers a lot of narrative ground. The story jumps backward and forward, from small town to big city and back again, peering into the lives of not only the two main characters, but also many of the people they encounter on their parallel quests for their own bright stars.

The play tells the story of Alice Murphy, an editor known for working with Southern renaissance writers like Carson McCullers and Eudora Welty. Murphy forms a bond with Billy, a promising young writer from a small town seeking publication in the literary magazine she runs. The play follows these two through the present and the past as they each search for something they never imagined they'd find in one another.

Swift Creek Mill Theatre's production of "Bright Star" is fast-paced and well-oiled, led by director Tom Width. The show features a cohesive ensemble, a few great songs and some noteworthy dramatic performances. Yet it still feels like something's missing.

Grey Garrett is wonderful as Alice Murphy. She and Jim Morgan, who plays Alice's love interest Jimmy Ray Dobbs, carry the emotional weight of this story quite beautifully. Carlen Kernish and Rachel Marrs are a fun comedic duo. Ian Page is plucky and likable as Billy, and Richard Travis makes for a truly contemptible villain. On opening night, he made a child in the audience cry and received a few "boos" at curtain call, a testament to his success in his role.

The ensemble players are what really make this production work. They literally build the scenes, constantly moving and rearranging set pieces and populating the many towns and locations we visit throughout the story. They sing and dance and react to the story in every scene, adding depth and body to the songs and visual interest onstage.

The songs are great, toe-tapping bluegrass-Broadway styled tunes, and Paul Deiss' musical direction serves them well. The vocal arrangements are complex and demanding, though, and sometimes they presented a challenge to these performers. These songs call for impeccable harmonies and pitch-perfect vocals and, for the most part, that's what you'll hear. But on opening night there were more than a few off-key moments and garbled harmonies. Grey Garrett is undoubtedly a talented singer with a beautiful voice, yet sometimes she just wasn't loud or powerful enough for these songs. There were some vocal highlights, though. Rachel Marrs was great on "Pour Me Another Round," and Jacqueline O'Connor showed up with strong vocals in "Please Don't Take Him," and "The Sun Is Gonna Shine Again," along with the entire cast.

Width's set is simple yet versatile. Nearly every scene requires a new location, and I enjoyed the swift transitions and the smart use of minimal props and set elements to suggest a setting during shorter scenes. One thing that did not work for me was the use of a toy train set instead of just sound effects when we needed to know a train was passing by. This felt just a little too twee, especially considering the ominous role the train plays in the narrative.

With a story spanning three decades in the American South, and a bevy of shocking secrets to reveal, Swift Creek Mill's "Bright Star" will break your heart, then gently mend it. In spite of its flaws, "Bright Star" is a successful musical with memorable tunes and moving performances.