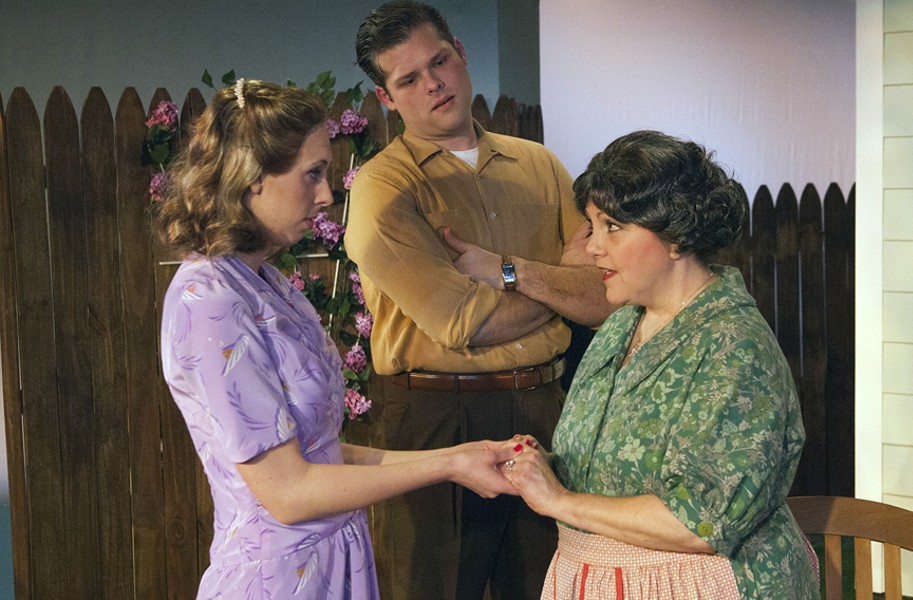 Maggie McGurn plays Ann, George Dippold is Chris and Jacqueline O’Connor is Kate in the classic Arthur Miller drama “All My Sons” at Swift Creek Mill.

A fractured family shatters to pieces and the American Dream comes crashing to the ground in Arthur Miller's classic drama "All My Sons," currently at Swift Creek Mill.

Based on the true story of the Wright Aeronautical Co., which supplied the military with faulty engines during World War II, Miller's drama challenges the values that shape and sustain the American myth of an idyllic suburban life with 2.5 children and a white picket fence around every yard.

The play zooms in on the backyard of Joe Keller (Barry Pruitt) and his wife Kate (Jacqueline O'Connor) on the morning after a storm has knocked down the memorial tree they planted in honor of their son, Larry, who went missing in the war. When they learn that their other son, Chris (George Dippold), intends to marry Ann (Maggie McGurn), the woman his brother used to date before going off to war, everyone must face that Larry isn't returning. And like the fallen tree in their yard, the family cracks and topples under the weight.

By all appearances, the Kellers are living the American dream. Joe rhapsodizes about his successful business and the hard work and effort he put into building it. He wields the life he lives like a carrot on a stick, offering it up to anyone he might manipulate with the promise of a respectable job, dinner in the park and a swell gal for companionship. But his own son seems disinterested in the life Joe has built with him in mind. Everything Joe has done has been in the interest of his family, his sons — or so he tells himself. His downfall stems from his own preoccupation with maintaining and protecting his lifestyle at any cost.

This production of "All My Sons" captures the feeling of the era, thanks in large part to Maura Lynch Cravey's period-appropriate costume design and Tom Width's set, which is itself an embodiment of the emptiness of the American dream, with its AstroTurf terrain and a realistically detailed façade of the Keller home.

But Width's direction sometimes fails to capture the complexities of the drama. Performances are adequate and engaging, but few of the big dramatic moments feel earned. The humorous moments early in the play work well, but this is a tragedy, and the serious moments that should have brought me to tears instead felt empty and flat. For a script so packed with layer upon layer of nuance and metaphor, this production felt too broad and ultimately underwhelming.

Still, there are many notable performances. Barry Pruitt is smartly cast as Joe Keller, the family patriarch working tirelessly to uphold his image as an affable family man. In the role of his busybody of a wife, Jacqueline O'Connor perfectly captures the frantic energy of a woman hell-bent on denying her own loss and pain. George Dippold channels a Hemingway-like disillusionment as their son, Chris. Maggie McGurn portrays Ann Deever with depth and subtle melancholy, and Matt Hackman delivers a sad intensity as George Deever, who sees the life he could have had paraded before him when he visits his childhood home.

Miller's drama feels remarkably relevant and poignant even in a modern world that has long since abandoned the rigid idea of an "ideal" American life, and audiences at Swift Creek Mill can expect to leave the theater with plenty to discuss. S