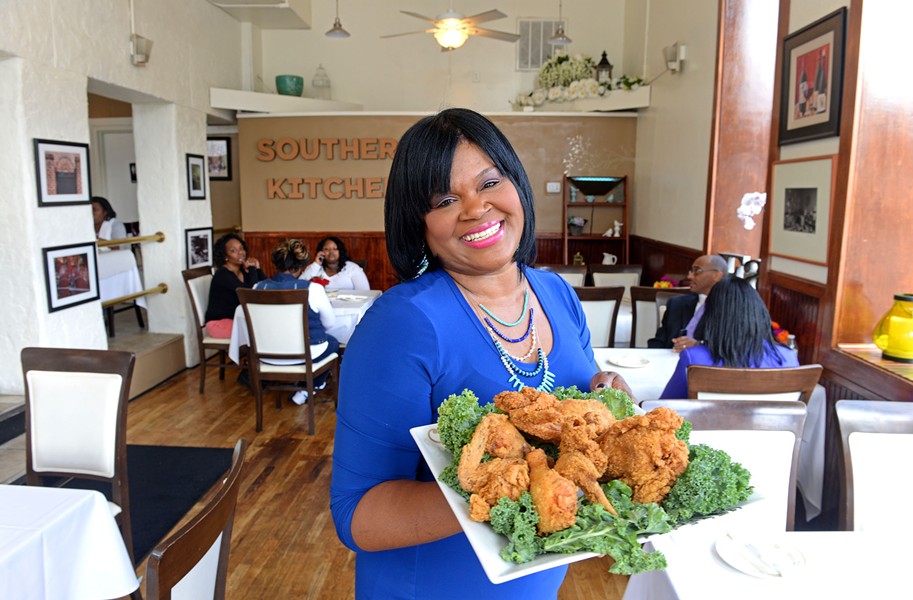 "No, you are my guest," says Shane Thomas, owner of Southern Kitchen Mouth of the South in Shockoe Bottom. I’m finishing lunch, and she gently swats my hand when I try to place a bunched napkin on the plate she’s lifting away. I don’t mind either way, but it’s notable in a town with restaurant service that at times can be questionable.

Southern Kitchen opened last summer directly across 18th Street from Sweet Teas, another restaurant specializing in Southern cuisine — and one that Thomas used to manage. Since then, Sweet Teas has leapfrogged to the former Arcadia space overlooking the 17th Street Farmers’ Market. The two Southern restaurants now bookend the block, corner beacons for the dilapidated storefronts sandwiched in-between that look like they’re either playing dead or actually are, for the time being.

I won’t even speculate about the back story of the two restaurants except to say perhaps it’s good for revitalization, and Thomas surely has done her part to bring a brightness and sense of order to the blight. It’s clear that she’s borrowed some ideas from her alma mater — namely the cheery exterior trim (her signature color is lime green to her neighbor’s teal blue) and menu items. But the vibe is her own. It’s smooth and classy — white stucco walls, upholstered wooden furniture, potted orchids, and strains of R&B and jazz. You might even get a little spruced up here for a weekend dinner.

Sometimes, there are glitches to the flow: sporadic Pandora commercials, an aggressive kitchen bell that rings relentlessly on one busy Friday night, servers who can get bogged down and forget your table for a very long time.

On the upside, Thomas herself is involved with her diners — smiling and singing while she delivers a birthday cake to a six top. She visits my table each time I stop in, making suggestions, filling water glasses and clearing plates. It’s comfortable here.

The cooks don’t play around with Southern dishes at Mouth of the South. The kitchen unleashes fat, sugar and salt liberally — as it should — though with varying levels of success. While I usually maintain that if it’s immersed in a vat of spitting oil, it’s good, that’s only sometimes true here.

The restaurant does breading right. Sometimes it’s thin and barely holding on, as with the fried pickles ($6). Good. Other times, the breading is thin and crispy, as with Big Mama’s chicken ($14). Great. If you’re lucky, the breading is thick and golden, padding an amorphous shell around a protein or vegetable. Such is the case with the fried oysters ($15), a basketful of crunchy, golf-ball-sized nuggets. Princely.

Chicken is essential to Southern cuisine. It pops up here in various forms, and there’s a choice between white and dark meat for some items. In general, I say go dark or go home, and this definitely is the rule here. I order a thigh and drumstick with Big Mama’s chicken entrée. It pulls apart easily. Juicy. Tasty. The white-meat option doesn’t hold up, at least not with the Tennessee hot chicken ($13), a thick breast that’s tough and flavorless. Even the awesome breading can’t save it, and it drowns in barbecue sauce.

The best of the seafood is the fried shrimp ($10), compact and flavorful with a crisp outer later. The fried fish ($12) borders on soggy and doesn’t taste like much of anything. Pulled pork ($14), a dried-out mangle of shredded hog served open-faced on Texas toast is another thing to avoid, along with the meatloaf ($9) that’s more of a bland burger shaped and sliced.

It wouldn’t be a Southern menu without traditional sides (two come with an entrée or $3 each a la carte). None is bad. None stands out. Fried okra and cabbage top the list, collards are sprinkled, not doused, in vinegar, french fries are dense, heavy and spicy with paprika and you should avoid the black-eyed peas without stewed tomatoes. Instead of sides, I’d focus on the Southern rolls, an unexpected burst of invention. They’re a spin on Chinese egg rolls with shreds of chicken, cabbage, collards and a smoky hot sauce packed into a traditional wrapper.

Naturally, there’s sweet potato pie ($3.99) for dessert. Order it if you can pack it in. Either way, you’ll leave with leftovers. And, if you order right (bigmama’schickenbigmama’schicken) you’ll most likely find yourself on the couch an hour later with a Styrofoam container on your lap, inhaling the rest. S