The new owner of the Lilly Pad at Osborne Landing has people flocking to his renovated spot with great river views and cheap brewskies. Even Mr. Mom. 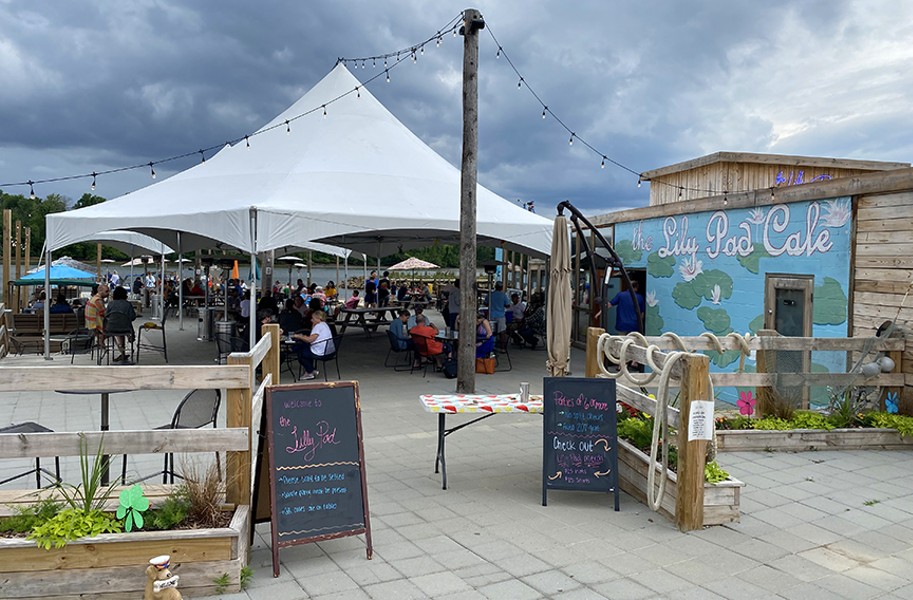 If you’ve spent any time on the water near Varina the past few years, you might know of a delightfully dilapidated spot called the Lilly Pad at Osborne Landing.

It was a bare-bones joint that offered tackle, a quick bite for boaters and prided itself on cheap buckets of cold beer with some of the best waterfront views in the area enjoyed on a glider rocker. Smell like James River fish water and worm dirt? No prob. The cinder block square spot was quite possibly the blueprint for all dive bars, complete with jukebox that was occasionally rolled outside on the gravel lot much to the delight of Harley riders on a Sunday cruise.

If you remember it, forget most everything about it.

Meet Lilly Pad 2.0, a totally revamped, hip-as-hell spot that has folks flocking from well past city limits to take in improved views of Kingsland Marina, bangin’ eats and cocktails, and most impressively some serious dockside entertainment and service if you can’t stick around for the party. With all the right things in motion, it’s not a stretch to say this is an entertainment destination well worth the tank. Heck, even Michael Keaton became a house regular while in town filming “Dopesick,” and a Canada goose named Gary decided to camp out there for the winter.

“Location is key,” says owner Max Walraven. “There’s nowhere else in Richmond you can sit on a dock, 3 feet from the river’s edge, and eat a cheeseburger and listen to music. Rockett’s Landing has some of that, but they’re not on the water.” 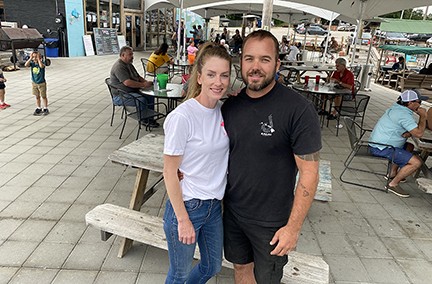 Prior to operating the Lilly Pad, Walraven leased the building to Jo Ann Mattern, who ran it for the last few years. According to Walraven, they didn’t agree on updated terms and her lease wasn’t renewed. As a result, he purchased naming rights – keeping a nod to the original owner Candice Atkins, whose first name was Lillian – among other assets and decided to take on a new venture.

“No one had vision before,” he says, explaining the Pad was more or less “run into the ground” over time. “None of it scared me. I have a contractor background, so I can renovate for 10 cents on the dollar,” he adds.

And so began a new era of the Lilly Pad, complete with large, glass windows overlooking the marina, a wood-fired pizza oven and sprawling copper bar, among countless major improvements.

The Lilly Padio took over the gravel lot and boasts a variety of live music nights on the weekend with offerings as varied as bluegrass, classic rock and throwback ’80s and ’90s hits. During the week, it rolls hard with salsa and bachata dance nights on Thursdays and holiday bashes for special occasions. Mother’s Day featured a tiki luau.

Walraven says these kinds of things broaden the customer base.

“Part of carrying the torch of the place is being a good steward of these waterfront properties for all of Richmond,” he explains. “I have people ask me where Varina even was. And they come here and feel like they’re in another place, with an island vibe. I’m originally from Hawaii and it does the same for me.”

When it comes to bands, Walraven does the booking and says he operates on guarantees and gives most bands a shot at what they think they’re worth.

“We’ll see how it goes, but I might not ask you back if the sound was off or the vibe wasn’t right,” he laughs. While the space doesn’t currently have a sound system, Walraven has plans to legitimize things with a permanent, wood-roofed structure and in-house sound system. “Right now, we are a restaurant that has bands, but I want to be thought of as a venue as well,” he says.

All the waterfront good times aren’t without some struggles. One big one is making sure everyone has a chance to enjoy it.

“It’s a balancing act when you have a line out the door of people who want to eat and table campers who came to see the band,” he says. “And I get that’s part of the old Lilly Pad vibe, camp out all day, but I run a business and restaurants make money by turning tables.” Currently, it has a two-hour limit on tables to keep the flow going.

If all goes well, he hopes to double his capacity with an old barge it is currently renovating, dubbed the Tadpole. “A buddy of mine jokingly said it should be a strip club,” he jokes. It’s fully outfitted to be a restaurant that could open within the year. “It’s a blank canvas really.”

Speaking of the food, Walraven has an army of culinary talent plucked from notables like Lemaire, the Hill Cafe, Mamma Zu and Southbound to craft menus and cocktail programs. “So much talent across the board,” he says. “I’ve had tons of applications, but that’s probably because I pay very well. It’s good business practice. Regardless of political affiliation, I know what a living wage is – and it’s not $9, $10, $11. Your staff is the face of your company. If that’s not on balance, you can’t expect to be successful. It’s the whole energy.”

While so much has changed, Walraven wants old schoolers to know one very important thing: That bargain bucket of domestic brewskies is still a thing.

“Not changing that. Best $10 beer special and best view? Yeah, that’s the sauce,” he says, laughing.