A yoga teacher helps inmates at the Richmond City Jail find peace on the inside. 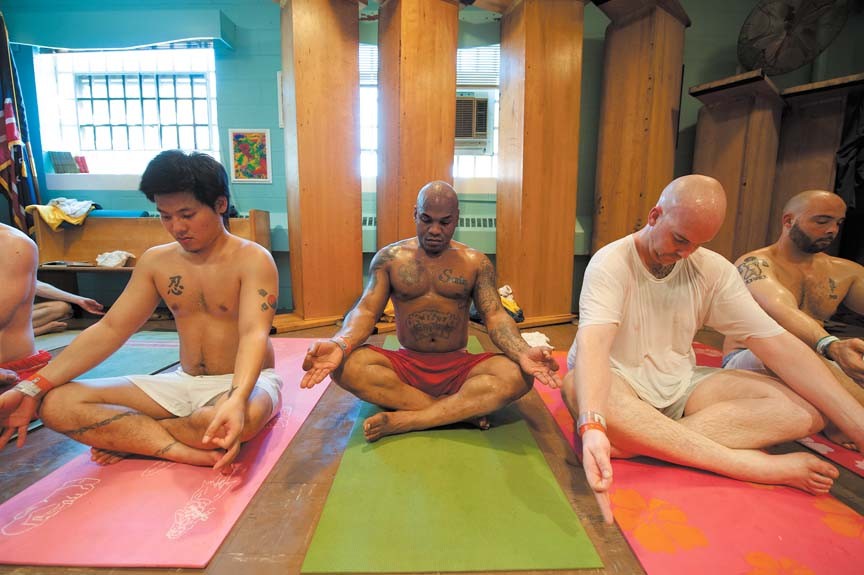 The single barred window is open as far as it will go, but the stingy breeze brings no relief. The cinderblock chapel feels like a furnace. There is no water.

But the men keep moving. In their every panting breath is peace.

On this Wednesday afternoon, just as he's done for the last three years, instructor Robbie Norris teaches ashtanga yoga to inmates in the Richmond City Jail.

Norris begins by leading the men through a series of sun salutations, the foundational sequence of nine movements. He counts in Sanskrit.

Ekam. Inhale, arms up, gazing up, hands flat together. Dve. Exhale, fold over, head down. Trini. Inhale, look up, lengthen your spine. And on through upward-facing dog, downward-facing dog, five even breaths, back to the beginning.

Some men seem weightless while they leap from pose to pose. Some shift slowly, wincing at old pains in backs and chests. Norris moves around the room, gently correcting their postures. The sibilant sound of synchronized breaths, called vinyasa, hushes the clamor outside: the clangs, the muffled shouts and the jingling of keys. 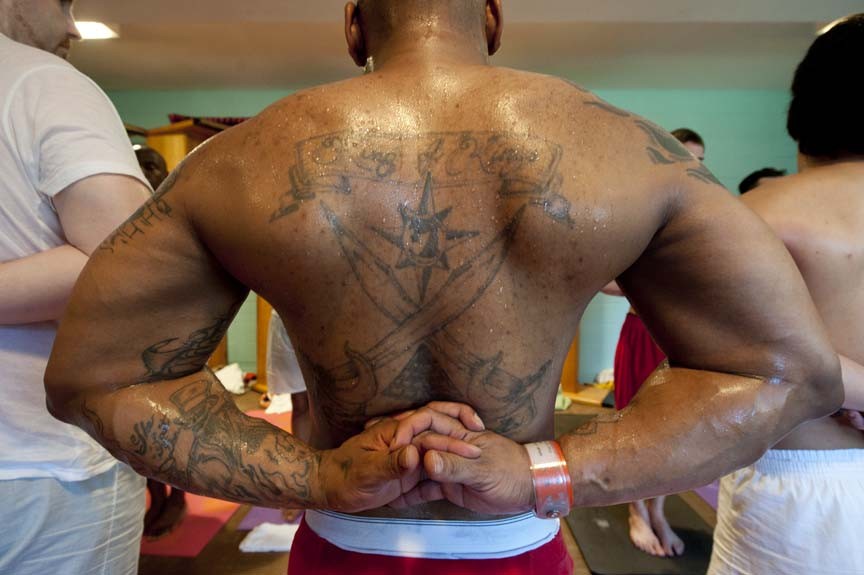 After a few sequences, Norris stops calling out the movements. The prisoners fall into their own syncopated rhythm. Arms rise and fall. Backs bow. Faces lift to the fluorescent lights.

NORRIS, 49, is a soft-spoken former financial planner who found in yoga his life's work. He instructs clients one-on-one through his company, Richmond Private Yoga, and teaches a yoga-centered elective for medical students at Virginia Commonwealth University. The ashtanga style of yoga he teaches is physically demanding — often misunderstood, he says, as competitive — and governed not by muscles but by breath.

For years, Norris has practiced yoga in the gazebo at Abner Clay Park, a small oasis in Jackson Ward. There he struck up conversations with several men who'd been in and out of jail. Listening to their stories, Norris began to think about how prisoners would benefit from yoga. With the help of the Rev. Alonzo Pruitt, a colonel in the sheriff's office and chief of chaplains at the city jail, he began teaching at no cost in April 2008.

Yoga programs for inmates exist across the country. One of the best known is the Prison Yoga Project launched by instructor James Fox at San Quentin State Prison in California. Fox has written an instructional book for inmates, and hopes one day to bring yoga to correctional facilities nationwide. A yoga program for women in the Richmond jail began in December 2009. But yoga's still a rarity in Virginia jails and prisons.

Pruitt credits Sheriff C. T. Woody with taking a chance on the program. "He says regularly that almost everybody is going to get out one of these days ... so whatever we can do to help them come out better people is something we're willing to try."

In the last three years, Norris has taught nearly a thousand men. Some are there for petty drug charges. Some have committed violent crimes. Norris doesn't ask them why they're in jail, unless he gets to know them well. But it makes no difference to him. Norris believes that "there's something very clean deep down in everybody," and yoga can bring it out.

The Rev. Pruitt says yoga gives inmates "a way to manage the understandable and necessary stress that is a part of incarceration." He's seen Norris' students fight less, complain less and adapt better to the difficult environment of the jail. Some inmates who had problems controlling their aggression have calmed down. They haven't gone "from big bad wolf to Little Red Riding Hood," Pruitt says, but they've learned humility. 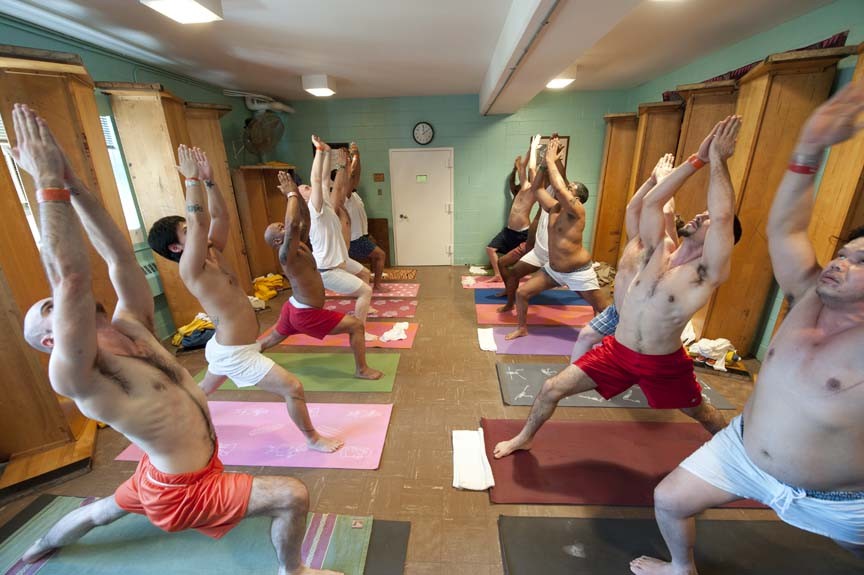 "I did not anticipate going into it that the dividends would be so great," he says.

Nor did anyone else.

YOGA ISN'T SOMETHING you do, Norris believes. It's something you practice.

Practice in the most mundane sense of the word. Practice like you practice chords on the guitar, or layups on the court. Norris teaches his students how to practice. He wants them to learn the entire, unvarying, 90-minute sequence of breaths and movements and do it five to six days a week, whether they're imprisoned or they're free. And yoga should be practiced "with equal parts effort and surrender," Norris says.

Effort and surrender. Tough lessons for troubled men to learn.

Colin McClees is a tall, intense 24-year-old who's one of Norris' most ardent devotees. McClees was diagnosed with "off the chart" attention-deficit-hyperactivity disorder when he was young, according to his mother, Perry Macdonald. For two decades she tried to help him find methods and medicines to quiet the constant noise in his brain, while McClees self-medicated with marijuana and other drugs. Nothing helped.

"My impulsivity is almost legendary," McClees says. He's been in jail for 18 months for convictions for burglary, grand larceny and assault on a law enforcement officer. He won't be freed until late 2012 or early 2013.

The city jail, notorious for its overcrowded and crumbling facilities, is much worse than prison, McClees says. Most inmates are confined not in cells, but on tiers where they sleep in tri-level bunk beds. They're packed in so tightly, he says, you can taste the adrenaline in the air. "It's a fucking nuthouse," he says. It's "a combination of sensory deprivation and sensory overload." It drove him to the edge.

Then he began to study yoga. "I think it's the first time he's ever wanted to have daily discipline," Macdonald says. Yoga relieves her son's anxiety and channels his enormous physical energy. In their daily 15-minute phone calls, she says she's heard a new calm in his voice. "I'm grateful for every day he's in Richmond," she says.

McClees recalls one terrible Thursday, when he learned he faced 10 additional felony counts. He was despairing of ever being able to pay $19,000 in court-ordered restitution. His relationship with his girlfriend was falling apart. That day, he told Norris he was skipping class.

Norris answered with the words of Sri K. Pattabhi Jois, the teacher who developed ashtanga yoga: "Practice. All is coming."