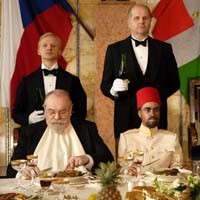 It must be easier to outlast communism than it is to outlast the '60s. At least that's the prevailing lesson from “I Served the King of England,” a comedy throwback from acclaimed Czech director JirA- Menzel, whose 1967 movie “Closely Watched Trains” won an Oscar.

Like that first film, “Served” is based on a popular novel by Bohumil Hrabal and is set during World War II. It also manages to look like it was made in the swinging '60s — even the scenes set in the 1930s — with a blend of slapstick and sight gags presented in a style that would have been better received 40 years ago, right around the time we find the main character narrating the story.

The story is told from the perspective of Jan (Ivan Barnev), recently released from prison, recalling his youth from a remote village where he's been moved. His memories take us through a series of service jobs at hotels of ever increasing stature, in which Jan waits on the wealthy patrons, usually seen living it up. After a series of affairs he falls in with a gorgeous girl who happens to be an ardent supporter of Hitler.

Interrupted by bits of soft-core porn that seem meant for another story, “Served” focuses on Jan's observations of the industrialists and their escapades, along with his own later travails. Much of it is redundant. The pillars of society can be the most decadent, but in case we don't get it, here's another scene of them chasing giggling prostitutes with handfuls of fruitcake, shot in a style reminiscent of Benny Hill or “Help!” without the Beatles. Cinematic goofing like this might have been neat in the groovy '60s, but in the age of Austin Powers it goes from quaint to tedious faster than a man running in double speed.

There seems to be a parable buried in the antics, in which Jan's continual climb up the ladder of society mirrors its descent into depravity. At one point Jan waits in the wings while a set of cloistered elite dines around a naked woman slowly spinning at the table center. When they leave, it's off with the clothes for another ribald romp. What's his take? Jan offers the occasional point about rich and poor while his younger self cuddles more women, but mostly he stands around grinning a lot. Really, nothing here is that amusing. (R) 118 min.<img src="http://www.styleweekly.targetedpubsplus.com/images/1star.gif"> S