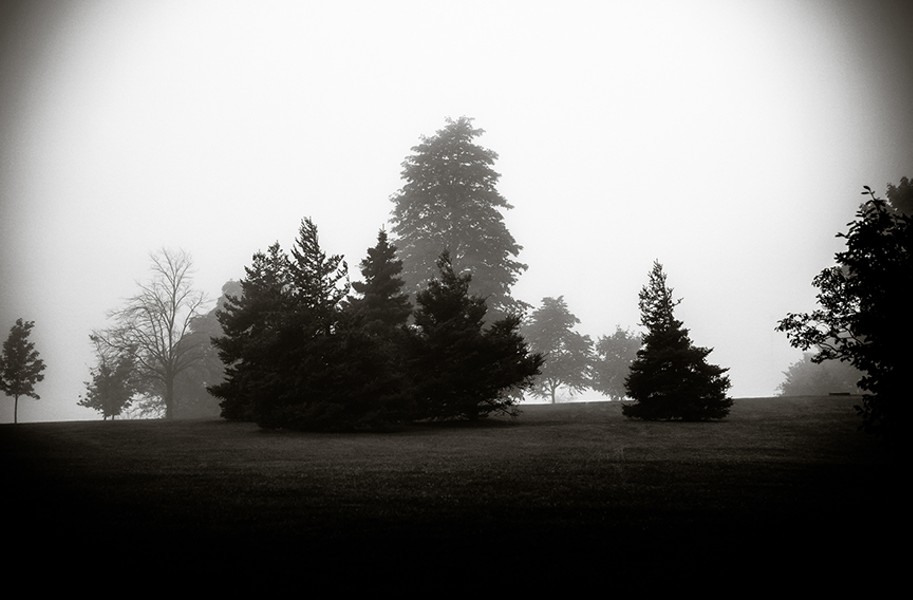 The commercial stretch of Libbie near Grove boasts a chain of legacy retailers that faces or skirts the avenue: Carreras, Kambourian, Peter Blair and Libbie Market are bedrock destinations for fine jewelry, carpets, menswear and food and spirits, respectively. And this spring another venerable brand, Reynolds Gallery, joined the mix, adding a Westhampton location for its stable of contemporary art. Unlike Reynolds’ Fan District flagship, located in conjoined, two-story townhouses, the new branch at 401 Libbie Ave. occupies an unadorned shoeboxlike exhibition space where the art does the talking.

And speak magnificently the gallery does through 14 enticing black-and-white and color photographs now on display by Alex Nyerges, an internationally recognized, Richmond-based photographer. “Fleeting Light” is the inaugural solo exhibition of Reynolds’ new outpost. Nyerges’ contemplative works, printed on archival pigment print on Museo silver rag paper, depict – or whisper might be a better verb – impressions of places he has visited during the last four years.

After a self-imposed house arrest during the pandemic, many gallery goers should be vicariously transported to such places as Budapest, Paris, Nashville, Tuscany, Chicago and Florida via these images. But expect no travelogue. Whether aiming his lens at a natural landscape or an urban street, Nyerges captures suspended moments. One of his photographs was taken on the cusp of dawn before the moisture on a medieval cobblestone roadway had evaporated – others where fog still clouds a grove of trees. These are moments just before the world awakens and has not yet rubbed its eyes. The mood is intimate as Nyerges shares something special: the possibilities of the day to come.

Nyerges, a native of Rochester, New York, whose 15-year tenure as director and chief executive of the Virginia Museum of Fine Arts has allowed him to travel the world, has an art historian’s eye for subtlety and instinct for romanticism that permeates these images. In “Budapest Sunrise,” 2019, he captures glistening, metal streetcar tracks embedded in a roadway in the Hungarian capital. There's a hint of early-20th-century industrialism combined with belle epoch flair in the iron filigree of the overhead catenary that connects to the streetcar contact wire. In “San Gimignano,” 2019, Nyerges frames a vista with a rounded stone archway in a rusticated wall while capturing dramatic shifts of topography and perspective in a storied Italian hill town.

In addition to capturing subtle outdoor scenes in Chicago and Florida, Nyerges includes Richmond places in “Fleeting Light.” These images, shot along languid turns of the James River, are among the most elegiac and mournful images in the show. Dark and light tones blur transitions between the waters and its verdant riverbanks and islets. The haunted feeling recalls another Virginia-based photographer, Sally Mann. In fact, another of Nyerges’ pictures is a shout-out to that Lexington artist: “Chicago Fog: Homage to Sally Mann,” 2019.

“Fleeting Light” is a balm for hot summer days and should give gallery goers a boost of visual energy as they emerge from the pandemic. These photographs neither shout nor nudge, but remind us of the magical and beautiful unknowns of time and place.