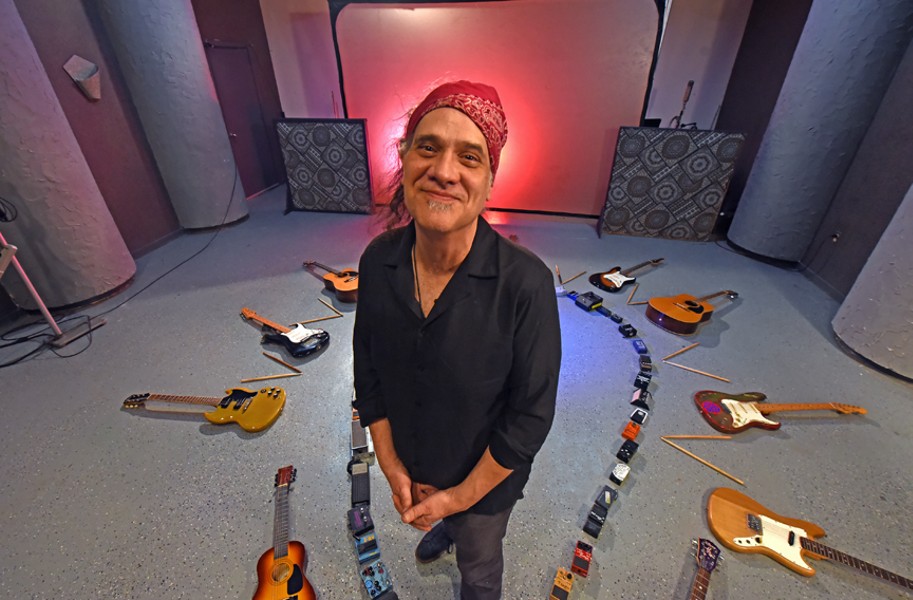 For about 30 years, John Morand has been accustomed to being on one side of the recording studio booth.

As a co-founder and co-owner of Richmond's legendary Sound of Music recording studio, Morand has racked up production or engineering credits on albums for a staggering number of bands, ranging from studio-affiliated groups Cracker, Camper Van Beethoven and Sparklehorse to local acts like Gwar, Susan Greenbaum and Carbon Leaf, to top European acts and even hit pop trio Hanson. He's occasionally contributed his talents as a performer too, playing drums on a Sparklehorse track or adding percussion to a Cracker song or two, but it's been a long time since Morand's been in bands himself.

From 1988 through 1994 he drummed in a female-fronted band called Burst into Flames, which played South by Southwest and New York nightclubs. As Sound of Music became more successful, he says, "It got harder to balance. … I had to choose: Do I want to go to New York and make $50 tonight playing a show or do I want to stay and record the Black Crowes and make $500?"

About two years ago, with what he jokingly says began as "slightly drunk demos in the middle of the night," he started writing songs for what would become his first solo album, "Scotts Addiction," which launches April 27 with a listening party and performance at Sound of Music as part of the Richmond International Film Festival.

A pun on Richmond's ultra-hot Scotts Addition district where Sound of Music is located, "Scotts Addiction" features performances by performers connected to Sound of Music including Cracker frontman and Sound of Music co-founder David Lowery, James Jackson Toth of Wooden Wand, and members of local bands the Smirks, Toward Space and Wrinkle Neck Mules. It is mixed by local musician Bob Strickler, who has engineered albums for the Hold Steady, the War on Drugs and Awolnation. Influences on this album include Sparklehorse Cracker, Neil Young and the Bangles, Morand says. In addition to writing the songs, he sings and plays guitar, drums and keyboards on several songs.

Toth, also a contributor for Style, provides vocals on "I Feel You Coming," a wistful, mellow song heavily influenced by Sparklehorse with a soupçon of Fleet Foxes. Charlottesville singer-songwriter Lauren Hoffman, one of Sound of Music's first clients, fronts Morand's song "Could Have Gone Gold" with Lowery on bass and former Sound of Music co-owner Miguel Urbiztondo playing drums.

Addiction is a theme of the album, including being addicted to making music and "not being able to give it up and go on like most grown-ups have," Morand says. "People who can quit the music business, do. If you can't figure out a way to quit, you keep going and that's who we call survivors." And it's about talented friends such as the late Mark Linkous of the critically acclaimed Sparklehorse, who struggled and lost battles with addiction and depression.

It's also a nod to the entertainment and residential boom in the increasingly gentrified Scotts Addition, largely fueled by craft breweries. "This neighborhood is entirely based around alcohol more or less. It's like an entire city-sponsored industry of basically selling depressants to people. … These depressant factories that litter our neighborhoods," Morand grumbles. He notes with a laugh that he is fully aware of his hypocrisy because Sound of Music helped contribute to the district's transition.

Born in Chicago, Morand moved to the Richmond area in second grade and graduated from Henrico's Douglas S. Freeman High School. He skipped college in favor of doing video and audio production work for his late father, a longtime Leo Burnett ad man who started his own firm in Richmond. Morand worked mostly on corporate videos, he says ("the kind of films you would watch at Capital One to see how your benefits work.") After Sound of Music opened in 1994, Morand turned to music production full-time as the studio worked with local and international acts, including performers such as D'Angelo, Susanna Hoffs of the Bangles, Joan Osborne, Daniel Johnston, Flat Duo Jets and musician John Doe of the influential Los Angeles punk band X.

"It is really intimidating to work with the best songwriters and singers during the day and then try to get off work and then go work on my songs," Morand says. "It's kind of like being on a race team and then you have like a car you also work on at home. But maybe just absorbing all this music helped me learn more about the craft of songwriting."