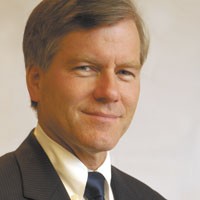 With peanut soup simmering and cloth napkins at hand, it was difficult to find a more genteel political lunch spot for opposing parties Monday than TJ's Restaurant at the Jefferson. But a debate invitation wasn't on Bob McDonnell's menu.

When the Republican gubernatorial candidate settled in for a secluded lunch with former Richmond mayor and Gov. L. Douglas Wilder, a Democrat, little did he know that a group of debate organizers was a few tables away, closing out a meal with strawberry lemonade sorbet all around.

Two hours earlier, at a small press conference in the hotel's Palm Court, the League of Women Voters of Virginia and AARP Virginia announced their intention to hold “The People's Debate.” The statewide broadcast of a gubernatorial debate, to be co-produced and distributed by WCVE public television and CBS 6, is tentatively scheduled for Oct. 12. PBS's Judy Woodruff will moderate.

After an organizer spotted Wilder and McDonnell across the room, a few table guests encouraged Amy Gilbody of AARP and Olga Hernandez, president of the Virginia League, to issue a personal debate invitation to McDonnell.

“I think they were a little surprised,” Hernandez said upon returning to the table. McDonnell handed her his scheduler's business card.

McDonnell surely wouldn't mind another surprise — from Wilder, about whom he issued a glowing public statement at the end of his turbulent mayoral term.

Would his bipartisan lunch — which also included Richard Cullen of McGuireWoods, a Republican, and former House of Delegates member Alex McMurtrie, a Democrat — help land an endorsement? Or perhaps the better question is: What's a Wilder endorsement worth to a Republican?