Is that the end of the case? Not necessarily. 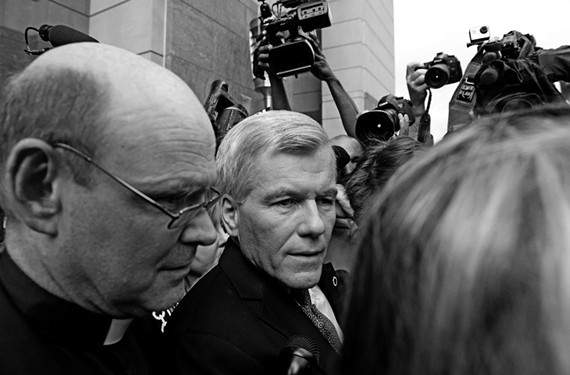 The U.S. Supreme Court has unanimously overturned 11 criminal charges against former Gov. Robert F. McDonnell but left open the chance of a retrial.

But the court didn't rule on the constitutionality of the Hobbes Act, which makes it a crime to violate a public servant’s “honest services” if he accepts money or a favor in exchange of performing an “official act.”

A key problem is defining whether an “official act” is something a public official does as part of his routine business or if it is, in fact, a bribe.

The Supreme Court raised the problem but made no clear decision about it in the case involving the former Republican governor, who once seemed destined for a bright national political career.

Roberts wrote: “Setting up a meeting, calling another public official, or hosting an event does not, standing alone, qualify as an ‘official act.’” Prosecutors need to identify a pending matter involving a “question, matter, cause, suit, proceeding or controversy” that “may at any time be pending” or “may by law be brought” before a public official.”

Instead of making a broad ruling on such issues, the Supreme Court sent the case back to lower courts to review if there is evidence for a new trial. If the answer is no, then the charges against McDonnell must be dismissed, the court ruled.

“It’s pretty clear that the justices believe the statutes were read too broadly,” says Carl Tobias, a professor of law at the University of Richmond. The case will go back to the Fourth Circuit Court of Appeals in Richmond which is to determine if there's enough evidence for a new trial.

In its decision, the Supreme Court made it clear that it disapproved of McDonnell and his wife, Maureen, accepting more than $175,000 in money, loans, gifts and vacations from vitamin supplement salesman Jonnie R. Williams Sr.

Justice Roberts wrote: “There is no doubt that this case is distasteful; it may be worse than that. But our concern is not with tawdry tales of Ferraris, Rolexes, and ball gowns. It is instead with the broader legal implications of the government’s boundless interpretation of the federal bribery statute.”

Legal experts have said that the McDonnell case could send a signal to federal prosecutors and judges across the country about how far they can go to weed out corruption. It is a murky area because the McDonnells didn't violate Virginia law.

McDonnell was sentenced to two years in prison for his federal convictions.

Had the court, short one person after the recent death of Justice Antonin Scalia, voted 4-4 in the McDonnell case, the convictions would have been upheld.

In that case, McDonnell would have started to serve his prison term, most likely at a minimal security federal facility in Petersburg.

Maureen McDonnell was sentenced to a year and a day in prison. Her husband’s ruling is likely to affect her case.

Whether there will be a new trial is uncertain. Tobias seemed dismissive, but Jeffrey Bellin, a law professor at the College of William & Mary, says the opportunity remains.

If so, the reading of instructions to the jury must be more precise.

“My read of the opinion suggests that the new jury instructions required by the Supreme Court are more complicated but not all that different from the ones the court gave the first time around," Bellin says, "so we are likely to see ongoing proceedings in the case.”

Virginia Republicans seemed elated by the decision. Speaker of the House William J. Howell said in a statement: “The strength of the American legal system is measured not by the guilty convictions it levies but instead by the innocence it preserves.”

You can read the full decision here, and more in this week's issue of Style.