Scott Elmquist Richmond police officer Amanda Acuff with her partner, Scooter, at the police department’s aging horse barn. Supporters hope the city budget will have funds for a new one.

Richmond officer Amanda Acuff is attempting to talk seriously, but her partner, Scooter, is making it difficult.

The 13-year-old quarter horse wants to nuzzle and lick Acuff’s face while she describes the successes of the department’s mounted unit.

The department’s horse barn in the North Side, a 1965 structure, is clean but its age is evident — mold, outdated equipment and holes in the cinder block, Acuff says.

Police might be getting a bump in the mayor’s budget this year, but the officers of the mounted squad and their supporters hope the four equine members of the department get what they need most: a new home.

The barn at 801 Brook Road floods and water flows off Belvidere Street, he says. The small turnout area, where the horses can move around, sits under the overpass of the half-acre site, and trains periodically zoom by noisily.

The department has made plans for a $750,000 new facility on 4.5 acres near John Marshall High School. Softer stalls, new equipment and room for community tours are on the wish list. So is space outside, for the horses to train in the city. 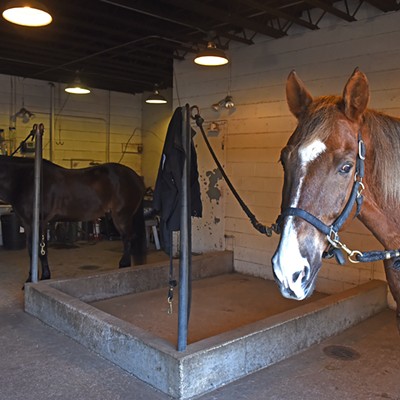 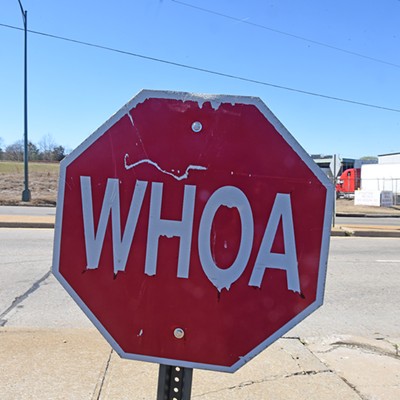 On the job, Nierman says his 15-year-old partner, Rio, can go where patrol cars and motorcycles can’t — maneuver more easily, see over fences at 10 feet off the ground and better control crowds.

Plus, there’s the invaluable element of the novelty and approachability. Mounted officers meet a lot of people who’ve never met a horse — or an officer.

“People actually come out of their houses to talk to us,” Acuff says. “If you drive by, people maybe wave. But every block, people constantly stop and talk, take pictures, pet the horse.”

That translates into better relationships with the community and more information from residents, the officers say. A friendly chat can lead to a tip about where to find the neighborhood drug dealers.

“We ask a lot of our partners throughout the day to go against their nature, to go out in traffic with cars and tractor-trailers, things that horses would ordinarily flip out if you asked them to do that,” Nierman says. “And what we’re hoping is to be able to return the favor, start putting them in a more comfortable location.”

A group wants to ensure the unit gets what it needs. The nonprofit Friends of the Richmond Mounted Squad has donated saddles, fans and even a few horses through the years. And it’s dedicated to making sure the unit doesn’t disappear.

“When things looked precarious, we went to bat for the importance of the unit,” Sue Mullins Ramsey, co-founder of the group, says. Now her volunteers are keen to raise the money for the new facility — and make sure the project isn’t scrapped this budget season.

“We’re committed to the unit,” police spokesman Gene Lepley says. “It’s not like there’s no place, no home for them, but we’d like to make it better.”

But Lepley says it’s too early in budget season to know how much the department will get this year. And if they don’t get enough, will the Friends have a chance to raise the rest?

“It depends on how much needs to be raised,” Lepley says.

The friends will hold several fundraisers in the coming months while they wait for a firm number from the city. Information is posted on its Facebook page, under Friends of the Richmond Mounted Squad.

Acuff says that horses last longer than patrol cars and cost less, once you have the infrastructure in place. The horses work for 10 to 15 years before retiring to the country. They’re even a hot commodity after police retirement, she says, because they’re calm and well trained. Horses can live 30 years.

But before the police equines retire, their officers get a chance to keep them. Scooter, for example, will retire to Acuff’s home — a partner for life. S