Mickey Rourke makes a comeback as a pro wrestler trying for a comeback. 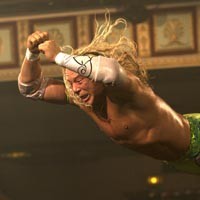 Mickey Rourke's heartthrob days are long behind him, but does he really look as bad as he does in “The Wrestler”? Rourke could have been described 20 years ago as having rugged good looks, but in Darren Aronofsky's film, written by former Onion editor Robert Siegel, simply calling him “rugged” would be a generous understatement.

Randy “the Ram” Robinson is no less weathered or misshapen than the character Rourke played in 2005's “Domino,” where he was hopelessly trying to present a cool, tough-guy faAade of yore. But Ram, a down-on-his-luck professional wrestler (is there a sadder fall from grace?), is a more sympathetic being, whose face has been layered and scarred by time and abuse. One wonders (hopes?) some makeup or digital wizardry was used to heighten the looks, but, even so, a kind, tender core peeks out in places. The character created is definitely human — ugly and beautiful.

Rourke has had steady employment since his heyday, and similar to Ram he's been eking out his living on the fringe of his former glory — perhaps for long enough to start thinking he's probably not going to make it back. On the contrary, Ram hasn't begun reconsidering his career, believing a rematch of a legendary bout that took place during his prime 20 years ago could return him to the top. Mostly the matches he gets are against up-and-coming nobodies in venues that look like the back rooms of rundown local community centers — pitiful substitutes for the arenas of Madison Square Garden and the like where the former sensation once flexed his muscles to the delight of thousands.

Ram's life has a sadness, but the film isn't after pity. We follow him in his sunset, a gloomy one where lurk specters of dimming health and recognition, amid low-level wannabes and used-to-beens trying to hold onto a piece of their dignity. The movie doesn't make fun of these people, feel sorry for them or use them for cheap laughs. Aronofsky simply sets them in motion and lets them be — creating people you might know — who happen to entertain on weekends by doing somersaults with spiky hair and spandex.

“Rocky” comes to mind during “The Wrestler,” but it's soon apparent there will be no rousing conclusion. Ram's spirit is hardly indomitable. He can deal with life at the trailer park, the go-to symbol of failure he turns into an opportunity to make fans out of the local children. Ram must ask for more shifts at the grocery store to pay the back rent, measuring out deli foods in the rare place where he doesn't wish to be recognized.

Like a little more coleslaw, the indignities pile up. Injuries and old age eventually force him to consider retirement, which begins to look better with a love interest in a stripper (Marisa Tomei) and a reunion with an estranged daughter (Evan Rachel Wood) in the realm of possibility. The question is whether these glimmers of hope are realistic or out of reach, and whether Ram can stand to find out.

If the loss of pride and possessions don't faze Ram, the slow loss of adoration sends him on a mad dash for these commonplace human connections. The movie makes terrifying connections between the self-flagellation of the ring and the sting of rejection and regret outside it. There's no doubt Rourke is in a comeback-worthy performance. It's sometimes painful to witness the wearing down of Ram, as in one scene when he admits to his daughter, who loathes him after years of neglect, “Now I'm alone, and I deserve it.”

The movie's ending is abrupt and difficult. All we know is that Ram is being pushed away from the cheering throng, the only thing that loves him. The conclusions that follow are so shockingly honest they are difficult to understand at first. Aronofsky has crafted a dismal scenario where love is searched for and not found. All Ram can do is chase it, into the abyss if necessary. (R) 105 min. HHHHI S