Caped crusaders Adam West and Burt Ward on the Batman franchise and how it keeps ticking. 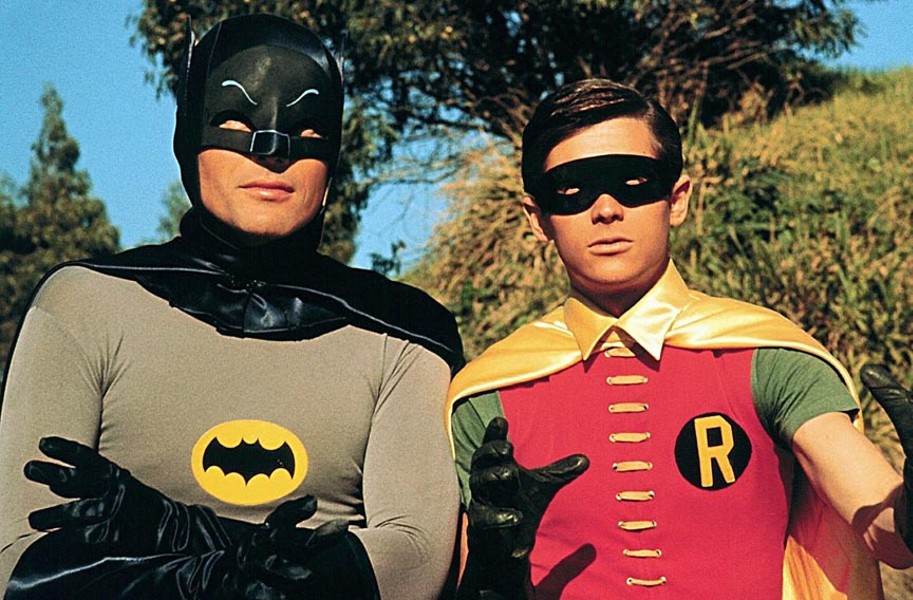 Holy Greater Richmond Convention Center, Batman — look at these geeks! Fans of fantasy and sci-fi in comics, television and film should be ponying up serious cash for the Wizard World Richmond Comic Con this weekend. If you want, you can buy an autograph from the original caped crusaders, Adam West and Burt Ward, who are pictured above. They speak Sept. 13.

It’s been said that ’60s pop culture can be distilled down to the three Bs: the Beatles, Bond and Batman.

But “there’s another B … billionaire. In other words, I started that billion-dollar franchise, didn’t I?” asks Adam West, star of the classic ABC-TV series “Batman,” which transported viewers to its campy bif! bam! pow! comic-book world twice weekly from 1966 to 1968.

“Batman, Bond and the Beatles were really important in the ’60s,” West says, “[and] they’re continuing [today]. That’s the amazing thing.”

The series, which co-starred Burt Ward as Robin the Boy Wonder, spawned an eponymous 1966 theatrical movie and a modern-day empire of Bat merchandising and films.

The series also is experiencing a renaissance of its own, with a new “Batman ’66” comic book, action figures and statues. “Batman” reruns air daily on cable television. And after decades of pleas from fans, the series, which, because of rights disputes, has never been available on home video, finally is being released Nov. 11 as a remastered set, with all 120 episodes on Blu-ray and DVD.

“I saw some samples of the footage and it was breathtaking,” Ward says. “It was amazingly crisp and clear. It’s going to be spectacular.

As for the merchandise, he says, it’s “gone through the roof. It ranges from action figures all the way up to an 11-and-a-half-foot-tall slot machine with our pictures on it.”

West and Ward reprised their roles as the dynamic duo in 1970s cartoons and kitschy television specials and have made appearances for decades at comic conventions, signing autographs and indulging in the occasional Batusi.

“They have the best time,” Ward says of fans he encounters. “Parents have as much fun meeting us as the children, if not more. It’s so funny to watch … because for that moment that they meet Adam and I, they will become childlike again. … And who doesn’t want to be like a child again, even if it’s just for a few minutes?” West and Ward were at the epicenter of 1960s Bat-mania. Huge celebrities, they were mobbed wherever they went.

“People were insanely crazy at the time ‘Batman’ was on,” Ward says, recalling that thousands upon thousands of fans showed up for his first public, in-costume appearance at a department store in Tacoma, Wash. He had to hire a dozen University of Washington football players as bodyguards.

During the ’60s, the caped crusaders rubbed shoulders with celebrities such as Frank Sinatra, Sammy Davis Jr. and Elvis. Ward was nearly cast as the lead in the “The Graduate” but lost the role to Dustin Hoffman because the studio was afraid of harming his clean-cut image as Robin.

And West asks, “Can you believe I was asked to play James Bond?” It was “just maybe a dog’s hair away” from happening, but a contract dispute prevented it. Plus, he adds, “I could have faked it, but I thought it should have been a British person.”

Asked what he thinks of the modern-cinema Bat men — whose ranks will include Oscar-winner Ben Affleck in 2016 — West jokes, “I have no personal opinion … except I hate ’em all.”

More seriously, he adds, “They’re all good actors and they get an immense production [budget] to bring to life what they do. With us, it was just slapping on some makeup and you got out and you did your thing.”

The show’s budget was so skimpy that Ward had to do his own stunts. “I had never been in an emergency hospital prior to that time. I got caught up to all the ones I hadn’t gone to before,” he says. “When you’re tied down to a table and you can’t move and you can’t protect your face and it’s 8 o’clock in the morning and they’re getting ready for a big explosion and the special effects guy walked past you and you smelled liquor on their breath, you’d know that’s a bad sign.”

These days, West has an all-new fan base of teens and 20-somethings from his role playing a wackier version of himself as the mayor of Quahog, R.I., on the hit Fox animated series “Family Guy.” Many of his new fans aren’t even aware he was Batman.

“Isn’t that wonderful?” West says. “I’m very grateful for that. … Seth MacFarlane called me because he had written a pilot for me a few years earlier and he remembered that we had the same kind of comic sensibilities, and I said, ‘Yeah, I don’t mind making fun of myself.’ … You just take the quirkier parts of your personality and try to make those lines with which [the writers] try to crucify you funny and believable.”

As for Ward, a lifelong animal lover, one of his first big purchases as a TV star was a lion cub he kept in his Los Angeles apartment. He and his wife now run the nonprofit Gentle Giants Rescue and Adoption organization, which aids large-breed dogs such as Great Danes. “I was a caped crusader and now I’m a canine crusader,” he quips.

Reflecting on the show’s longevity, Ward says it still has an audience because “we were a show for the whole family.” By contrast, he says, the new movies are much edgier, which can exclude smaller children.

“Parents don’t always want to take little kids to see such real violence, whereas with our show … no one ever got hurt,” he says. “They were thrown over tables but they hopped right back up. … For kids, it was the hero worship of fighting criminals in a super, bigger-than-life way. For the adults, it was the nostalgia of the comic book. And for the teenagers and the college kids, it was the double meanings and all the camp style. We used to say that we put on our tights to put on the world.”