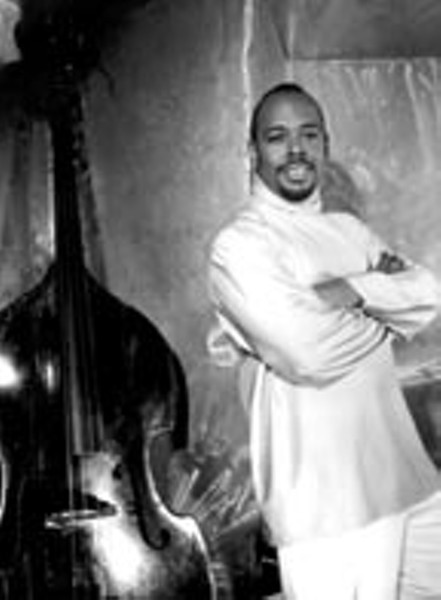 Carter built her early reputation with an aggressive, percussive approach. Her fame skyrocketed when she was invited to play a legendary violin owned by the preeminent 18th-century virtuoso Paganini. Her most recent Modlin Center performance was divided between light classical pieces played with restraint and songs in her original hard-swinging style.

The first meeting of McBride and Richards two years ago was memorable both for a complex and imaginative reworking of Nat Adderley’s “Work Song” and for McBride’s surprising Frank Sinatra impersonation. This year’s performance will reprise “Work Song” as well as a number of new arrangements by Richards, McBride and Christian McBride Band keyboard player Geoffrey Keezer.

“I’m doing ‘Tahitian Pearl’, a ballad off of ‘Vertical Vision’ [CMB’s latest release],” Keezer says. “In a way it’s really not that difficult, it’s already arranged from start to finish, it’s just a matter of adding horns. It’s easier than trying to find a new way to approach a standard; there’s no point in doing it like everybody else.”

“For the second piece, maybe something new, something that we haven’t recorded,” Keezer says. The pianist’s recent disc “Falling Up” featured several duets with Hawaiian slack key guitarist Keola Beamer, reflecting an interest in an expanded musical vocabulary. “In jazz there is a lot of dissonance and resolution, tension and release,” Keezer says, “Hawaiian music is less aggressive, more diatonic and consonant. It requires creativity with fewer tools, as if you were used to painting with fifty colors and now you use five but still stay just as beautiful.”

Richards, working on arrangements for McBride’s “Wizard of Montana” and “Uhuru’s Moment Returned,” echoes the painting metaphor. “I’m working with some color combinations I haven’t used before,” he says. “On ‘Wizard’ there will be piccolo trumpet soli — all four trumpeters — with synthesizer and Christian’s playing arco (bowed) bass. ‘Uhuru’ combines euphonium, bass clarinet and soprano sax.”

The program will gel when Richards, Keezer, McBride and the other musicians get together in Richmond for rehearsals. For the concert the CMB will be united with G.A.M.E. Keezer will displace John Toomey on piano, Terreon Gully will take Howard Curtis’ place on drums, and Ron Blake will fill in for Southeast Asia-bound John Winn on sax. (The only other change in the regular G.A.M.E. lineup is Washington saxophonist Luis Hernandez sitting in for the ailing Skip Gailes.)

“It will be strange without Howard, John and [bassist] Victor Dvoskin,” says Richards, “but it will be great to work with Christian’s rhythm section.”

Richard’s expresses great admiration for McBride’s approach. “He’s a perpetual student,” Richards says, “so eager to learn and always open to new ideas. Like when he played [Franz Schubert’s] “Trout” with the Shanghai Quartet. His desire to keep on growing, that is inspirational in a player of his magnitude.”

Given that McBride introduced Richards at their previous performance as “the genius,” it’s safe to say that the respect is mutual. S

The Christian McBride Band performs with violinist Regina Carter on Wednesday, June 2, and with Doug Richard’s Great American Music Ensemble Saturday, June 5. Both shows are at 7:30 p.m. at the University of Richmond’s Alice Jepson Theatre. Tickets to each cost $13-$18. Call the box office at 289-8980.