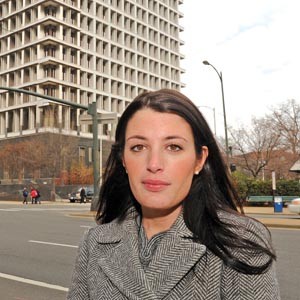 Correction: In earlier print and online versions of this story, Style incorrectly reported the date of the alleged incident between City Council aides David Hathcock and Jennifer Walle. Walle claims that Hathcock made unwanted sexual advances toward her on or about April 21, 2010. We regret the error.

To read the full transcript of Style's interview with Walle, click here.

This is a city that loathes controversy — at least out in the open. That makes Jennifer Walle's situation that much more awkward. Earlier this month she accused some of the city's top officials of embarking on a campaign to suppress an investigation into allegations that a fellow City Council aide touched her inappropriately.

In an interview with Style Weekly and the Richmond Times-Dispatch last week, Walle says City Council President Kathy Graziano was dismissive of charges that her top aide, David Hathcock, made suggestive comments and inappropriately touched Walle. Via e-mail, Hathcock defers questions to his lawyer, Barbara Queen. Attempts to reach her were unsuccessful.

Walle says Graziano insisted that she file a complaint against her boss, Councilman Bruce Tyler, who was challenging Graziano for the council presidency and, Walle says, made innocent comments about her appearance.

Walle, 26, got her start working with Graziano and Hathcock. And she says Hathcock was a mentor. He allegedly stopped by her office on April 21 — the day of the incident — just as she was looking for advice. While working at City Hall, she'd frequently been on the receiving end of inappropriate comments about her appearance, she says, many of them made by city workers.

Walle says the comments increased after word spread that she'd split with her boyfriend. “They'd say things that you wouldn't want someone to tell your wife or daughter in a work setting,” Walle says.

Rumors have swirled for months about who exactly made the comments, some involving Councilman Tyler. But Walle says she has no plans to file a complaint against him, describing their working relationship as healthy.

Acknowledging some initial concern about their appropriateness, she now says that the compliments she'd received from Tyler about her appearance were mild by comparison.

“I think that this is fair to say. … Bruce a lot of times will say something and it doesn't necessarily come out the best way,” she says. “He would tell me that I look nice or that he liked my dress. It might not have been that nicely put. But it wasn't inappropriate.”

But the comments did raise concern among other members of the City Council staff. Months after the Hathcock incident, Walle met briefly with Graziano and fellow City Council liaison Jan Girardi about the incident.

Walle says both she and Girardi were stunned by Graziano's response. The council president was dismissive of Hathcock's alleged comments and touching, Walle says: “She basically told me I could either look for a new job, or I could quit, or I could deal with everything that was going on.”

During the course of the next few weeks, Walle says she was urged by Graziano and Laura Drewry of the city attorney's office on multiple occasions to pursue charges against Tyler. When Walle insisted that Hathcock's actions were far worse, Walle says Graziano and Drewry resisted.

“Laura says, ‘Well, did he stop?' And I said, ‘Well, yeah he stopped.' And they're like, ‘Well, that's over with,'” Walle says. “And I remember this pretty vividly — I was fairly upset at this time — I said, ‘So, basically if someone rapes you once and they stop it's OK?'”
Walle says Graziano and Drewry insisted that she file a complaint against Tyler.

Despite her describing Tyler's comments as, on the whole, “innocent,” Walle agreed at one such meeting to be temporarily reassigned. “Looking back on this,” she says, “I will tell you I probably allowed people to bully me.”

The arrangement lasted only a few days, Walle says. During that time, she says Graziano approached her again. “Kathy at that point said I needed to file against Bruce or else I need to drop it,” she says.

Walle ultimately declined to file official complaints with the city's Human Resources Department against either Hathcock or Tyler. Reached by telephone, Graziano referred questions about the allegations to City Attorney Allen Jackson. Attempts to reach Jackson were unsuccessful.

Earlier, Graziano said that the city couldn't initiate an investigation without formal complaints. She also couldn't take action against Hathcock.

Walle says that she didn't trust the city to conduct a thorough investigation. “I didn't see how if I went to them that they were actually going to do a real investigation,” Walle says. “That's not to disparage HR by any means. But I saw how Kathy moved in on everything. I figured that she would be in on that, too”

Walle has since lodged a complaint with the U.S. Equal Employment Opportunity Commission. Her lawyer, Hayden Fisher, recently announced plans to file a civil battery charge against Hathcock for the alleged inappropriate contact. Charges could come as early as this week. S