Richmond’s starring role in HBO’s new movie may be the main reason to watch. 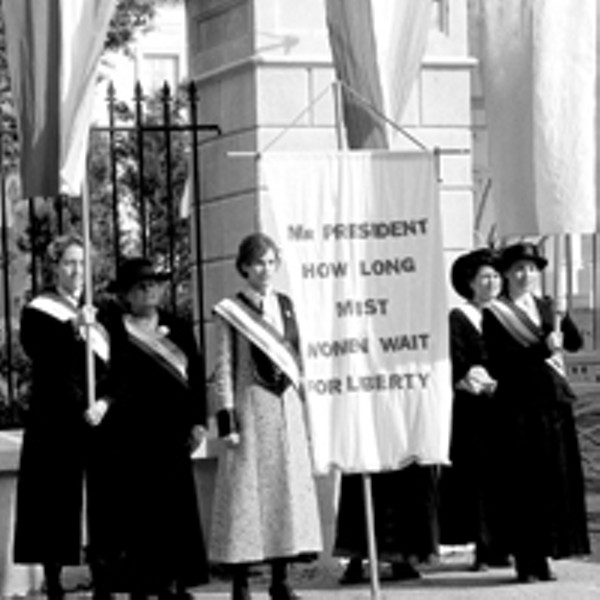 Sure, we complained when we had to take the long way to get somewhere because HBO crews were using a house on Monument Avenue to substitute for one in Washington. Naturally, we fussed a bit when Broad Street was blocked off for a long weekend while they staged a parade that really happened in the nation’s capital nearly a century ago. Predictably, we griped when restaurants and other establishments in the Slip were closed while filming continued. Inevitably, we moaned quietly when the Science Museum was shut down so that the building could be turned into what it once was, a train station, for scenes that happened in the early 1900s at Union Station in Washington. Richmond also doubled for Philadelphia and New York City.

Nevertheless, it was great fun to spot such stars as Hilary Swank, Frances O’Connor, Patrick Dempsey and Anjelica Huston popping up at nightspots and boutiques all over town. Others of us enjoyed standing around for hours watching scenes being filmed, despite the fact that the production crew sometimes referred to us disdainfully, as in “get those ‘Lookie-Lous’ to back up and get farther out of the shot.”

But the Virginia Film Office estimates that production of the film here pumped more than $16 million through the metro-area economy, including direct expenditures by HBO of almost $8 million.

So it’s no surprise that we’ve been waiting eagerly for just over a year to see how it turned out.

Well, brace yourselves for a disappointment.

Not a huge disappointment, mind you. But “Iron Jawed Angels” is not going to come close to being the most talked-about TV movie of the year, like this year’s “Angels In America.” When it debuted at the Sundance Film Festival last month, Variety called it a “talky, melodramatic overview of the dawn of equal rights for women in America.” The paper also said that the film “latches on to a worthy historical subject and then hopes noble intentions will be enough to carry the day. Alas, there’s no such luck.”

The film is as much about the clash between the old and the young who were battling for a woman’s right to vote as it is about the political forces that were arrayed against them. Paul and Burns are intent on working for a constitutional amendment, while Carrie Chapman Catt (Huston) and Anna Howard Shaw (Lois Smith) prefer a more conservative state-by-state approach. Early on, the two factions work together, but when the younger suffragists stage a parade in Washington to garner support and it turns into a riot, the older women are horrified. Paul and Burns lead a delegation to see President Woodrow Wilson, who puts them off. When the suffragettes begin to picket the White House as the United States enters World War I, the divide between the two sides becomes an unbridgeable chasm.

Wartime fervor turns against Paul and Burns and their followers – now being called iron-jawed angels – and they are arrested for “obstructing traffic” in front of the White House, although their protest is confined to the sidewalk. Thrown into prison in Occoquan, the women stage a hunger strike, which attracts little attention until word begins to spread that they are being barbarically force-fed and denied counsel. Public opinion forces the president to support their proposed amendment. The battle for women’s suffrage is won when Tennessee becomes the 36th state to ratify the 19th amendment in 1920.

“Iron Jawed Angels” is too talky. It also suffers from its efforts to preach the equal-rights gospel – proving once again the importance of what Hollywood mogul Sam Goldwyn said: “If you want to send a message, call Western Union.”

But it is nevertheless a watchable and – although all too infrequently – an engaging movie. The film’s grim prison scenes, some of which were filmed at the former Lorton Reformatory in Northern Virginia, will both horrify viewers and keep them on the edge of their seats.

Much of the credit for what’s good about the film should go to German director Katja von Garnier, who chose a spectacularly colorful palette and shows a confident hand at staging complex period scenes, whether of the intimate or sweeping variety. Garnier is a huge figure in German filmmaking, and deservedly so.

It’s easy to imagine HBO subscribers in some other place – Wichita or Cheyenne or Anchorage, for example – growing restless and bored halfway through this two-hour film and wandering off in search of more exciting entertainment.

But Richmonders won’t. For us, our city is the star of the movie. And it looks mighty good. S