We won't be able to reverse sprawl in Richmond until major steps are taken to improve the quality of life of our urban centers. 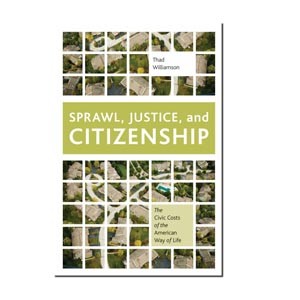 Cities are historical accidents: concentrations of economic activity and population that arise in particular places at particular times, generally to exploit a particularly suitable location or set of resources.

The early 20th century industrial city in the United States was in large measure a product of the transportation technology of its time. It made sense for industries to be located in close proximity to workers and to one another, in locations with good access to rail or water transportation. Once established, such cities developed more complex economic activities that fed on one another, and also developed residential patterns involving a mix of racial, ethnic and economic groups that, even if they didn't live literally next to one another, had a common interest in the well-being of the city.

The second half of the 20th century, however, saw the gradual unraveling of the industrial city. Suburbanization in America dates back to the late 19th century, but in the immediate postwar era, suburban growth became both quantitatively and qualitatively different. Generous federal subsidies for home ownership along with growing purchasing power underwrote the development of large-scale suburbs populated not only by elites but also by a mass middle-class and many working-class Americans as well. The development of the automobile as the dominant mode of transportation extended the spatial extent of American metropolitan areas, decentralizing both population and jobs. Finally, in the South in particular, the desegregation of urban facilities in the 1950s and 1960s stimulated white flight to suburban communities, with de facto segregation replacing de jure segregation.

The sum result of these trends is the turn-of-the-century American metropolis: One commonly characterized by high-poverty central cities surrounded by more affluent suburban communities that rely heavily if not exclusively on automobile transportation. In recent decades, shifting demographic trends have complicated the picture somewhat, with more racial minorities and immigrants moving to suburbs and suburban poverty ceasing to be an oxymoron. Today more poor people live in America's suburbs than in its central cities. Nonetheless central cities are still host to a disproportionate share of concentrated poverty, social problems and subpar public services, especially public education.

The Richmond metropolitan area is a classic case of the predominant pattern: two census-designated central cities — Richmond and Petersburg — that are majority black and have much lower median household income and much higher poverty rates than the suburban counties. These spatial differences in economic status in turn translate directly into sharp differences in the quality of public services. Middle-class parents who have the capacity to move to the suburbs often find that is the easiest — and from the standpoint of caring about their children, the morally safest — choice, rather than send their children to the Richmond Public Schools. The truly affluent, of course, can select private education.

This state of affairs is so familiar in the Richmond region that we almost take it for granted, and too often assume that nothing serious can be done about it. The sprawling metropolis of the early 21st century has for decades served as not only a mechanism for reproducing and reinforcing inequalities, but also a mechanism for its own perpetuation.

Here's why: Well-off suburban residents as a general rule are more satisfied with their communities than are central-city residents and would like to keep it that way. They're also reluctant to share resources with city residents with the intent of meaningfully redressing or eliminating city-suburb inequalities. Regional cooperation on matters of common interest to different jurisdictions is acceptable, but regional cooperation that seriously challenges the privileged status of suburban communities, and in particular the privileged status of suburban public schools, is a nonstarter outside the city limits.

In my recently published book, “Sprawl, Justice and Citizenship,” I examined the impact of spatial location and urban form on a variety of civic attitudes and behaviors using census data and a 2000 survey of nearly 30,000 Americans. Consistent with the story presented above, I found that residents of lower-density, suburban, car-centered neighborhoods were significantly more likely than their urban counterparts to rate their communities highly as places to live, to trust their neighbors a great deal — and to be politically conservative.

These findings illustrate the conundrum facing civic groups and political leaders who wish to reverse sprawl and build a more equitable metropolis. In the past, critics of sprawl have often focused on the costs of sprawl — the price attached to providing public infrastructure to support new low-density development on the suburban fringe. This argument often hasn't been very effective for two reasons: First, economists and others who have studied the issue generally have concluded that the purely economic costs of sprawl are fairly modest, and second, suburban residents are largely satisfied with their communities, at least compared with the existing alternatives. In economist lingo, suburban sprawl seems to do a fairly good job of satisfying the preferences of the majority.

In my view, the strongest arguments against sprawl are first, the ecological consequences of continued car-centered development; second, the social injustice involved in denying children in disadvantaged urban areas the same quality education and opportunities as suburbanites; and third, that suburbanization has often served as a mechanism by which the relatively well-off can escape from politics and sustained political engagement.

Taken together these are powerful arguments. But they won't translate into reversing sprawl in Richmond or other metropolitan areas until major steps are taken to improve the quality of life of our urban centers.

Ecological imperatives and long-term rising gas prices, as well as the desire of aging Americans to live in less car-oriented areas, may help raise the relative costs of suburban living and bring some suburbanites back into cities.

Permanently reversing long-term trends toward outward growth, however, will require increasing the benefits associated with living in the city. Museums and concert halls, beautifying the city, taming crime, and more responsive city government can all help in this regard, but the fundamental challenge in Richmond and elsewhere are the twin issues of public education and poverty. The city will always remain a poor neighbor to the counties so long as schools are perceived and experienced as plainly second-rate; but those schools are unlikely to improve dramatically so long as the populations they serve are overwhelmingly high-poverty.

There has been much discussion and some action over the years about improving the city schools, but not nearly as much serious discussion about taking dramatic, direct steps to reduce poverty and increase high-quality jobs throughout the city, jobs that can be accessed by existing city residents, and not just newcomers.

Until there is, don't expect the fundamental dynamics of our particular metropolis to change.

Thad Williamson is an assistant professor of leadership studies at the University of Richmond. His latest book, “Sprawl, Justice, and Citizenship: The Civic Costs of the American Way of Life,” was published this month by Oxford University Press.