Richmond's Beatles-flavored rock band teams with a Japanese version of the Fab Four for a Magical Mystery Tour. 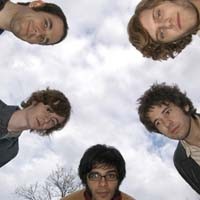 Local rockers Prabir & the Substitutes have more than a dollop of melodic Beatles in their shake, rattle and roll. After steady touring in recent years to build a regional fan base for their hyper, '60s-influenced tunes, the band was approached last January by bookers from the 9:30 Club in D.C. with an odd proposition: Would they open for the Silver Beats, a Beatles tribute band from Tokyo?

"I didn't know anything about them," says Prabir Mehta, 28, the lead singer and guitarist who moved to America from Gujarat, India, when he was 9. "I did my research and realized it was going to be the weirdest gig in the world."

But India and the Beatles kind of go together, don't they? That's where the Beatles sought enlightenment and John Lennon wrote "Dear Prudence" for Mia Farrow's sister, thinking she was a depressed homebody.

"It was great. They look and sound eerily identical to the real thing," Mehta says. "And they do the entire catalogue. You haven't really heard the Beatles until you've felt that bass thumping in your chest in a live venue."

When the Silver Beats planned their upcoming gig in Richmond at Toad's Place, they remembered the Substitutes and asked them to open again. One thing led to another and they wound up booking an entire tour together, a tandem straight out of a Tarantino-flick bar scene featuring a contrast between Beatles-influence and Beatles-worship, complete with Japanese guys who don't speak much English but have phonetically learned to emulate every syllable and gesture of the Fab Four.

Reached by e-mail in Japan, members of the Silver Beats wrote that they stay busy working five nights a week at the Cavern Club in Tokyo, one of many "Beatles-only" clubs in their country.

"I guess it seems like the Beatles never really broke up, and the music never seems to grow old," writes Hidemasa "Eric" Mabuchi, who makes an eerily familiar-looking Lennon. "Once we started to play instruments, we knew we could meet girls if we played Beatles songs, and so we really love the Beatles for that!"