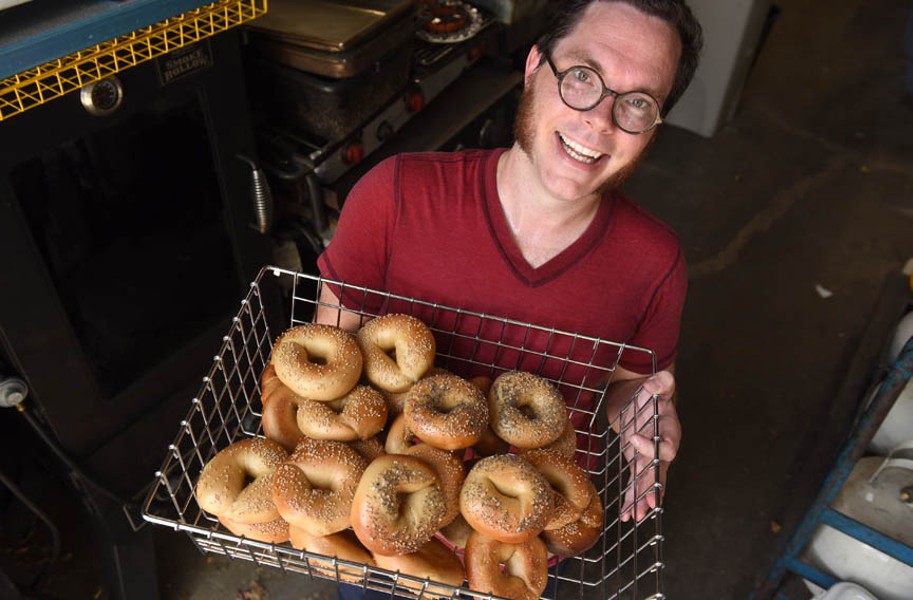 Stop your crying, ex-pat New Yorkers. Richmond may be a long way from the bagel capital of the world, but now you can purchase fresh, hot bagels made locally.

Not that New York bagels are all that great anymore. You’d be hard-pressed to find the smallish, hard and crusty bagels with a distinct chew that used to be justifiably famous there. The city’s bagels have morphed into soft, dinner-plate-sized monsters that no true aficionado would call authentic. I exaggerate — slightly — but those bagels have gotten ridiculously big and fluffy.

Nate Matthews says that’s because restaurants want a bagel that also can work in a sandwich. The smaller ones just don’t cut it. And as regular bagel-sandwich eaters can tell you, if a bagel is too hard, all the insides of your sandwich can slip and potentially shoot out the other side when you take a bite.

Matthews knows a lot about bagels. He recently started Nate’s Bagels, a once-a-week subscription club, after a lot of research. Although he moved to Richmond because of its music scene — he was a member of folk rock band, the Great White Jenkins — he worked as a civil engineer. The move to bagels might seem unorthodox, but after his job ended, Matthews wanted to start his own business.

He grew up in Maine and New Hampshire. “My mom took me to the five-and-dime, local grocery stores — everything was mom-and-pop up there,” he says. “That’s how it is in a lower-middle-class New England town. There is no Wal-Mart — up there, small businesses work.”

Matthews’ first thought was to open a bagel shop in the Fan, but the rent was expensive. “It’s easy to get emotional and write big checks,” he says — “but you know what? That’s probably not a good idea.”

Instead, he set up his operation in a warehouse converted into a commercial kitchen in Manchester that he shares with five other small businesses — mostly food trucks. In a narrow, crowded space with stainless steel shelving behind him, Matthews hand-rolls bagels 36 at a time and allows them to slowly rise, developing flavor, for 18 to 48 hours.

Hand-rolling the dough is key. In New York, he says, hand-rollers are eagerly sought, and they go from job to job, only doing contract work. There’s no comparison between a hand-rolled and machine-cut bagel, Matthews says: “Any reputable New York bagel shop will have hand-rolled bagels. End of discussion.”

How do his bagels compare to those from the big city? First of all, he uses brewer’s malt to give his bagels a distinctive flavor. The water is important, too: Richmond’s is simply different from New York’s. They’re a little larger than the old-fashioned bagels I’m nostalgic for, but they have the right kind of chew.

At $2 a pop, Nate’s Bagels can seem a little pricey. But he uses King Arthur flour, more expensive malt and sources what he can organically. Then there’s the real expense of labor. Matthews works around 60 hours a week baking, delivering to offices and other catering jobs, selling at the Birdhouse Market and passing out orders every Friday to members of his bagel club at Blanchard’s Coffee Roasting Co. in Scott’s Addition in the morning and the Fan’s J.M. Stock Provisions in the afternoon.

“This bagel is the real deal,” he says. “Take it or leave it. This is what it costs to make a real bagel in Richmond.”

“I know that might be idealistic,” he adds. “Richmond may not be big enough to support that, but I’m going to do everything I can to [keep it that way].” natesbagelsrva.com.