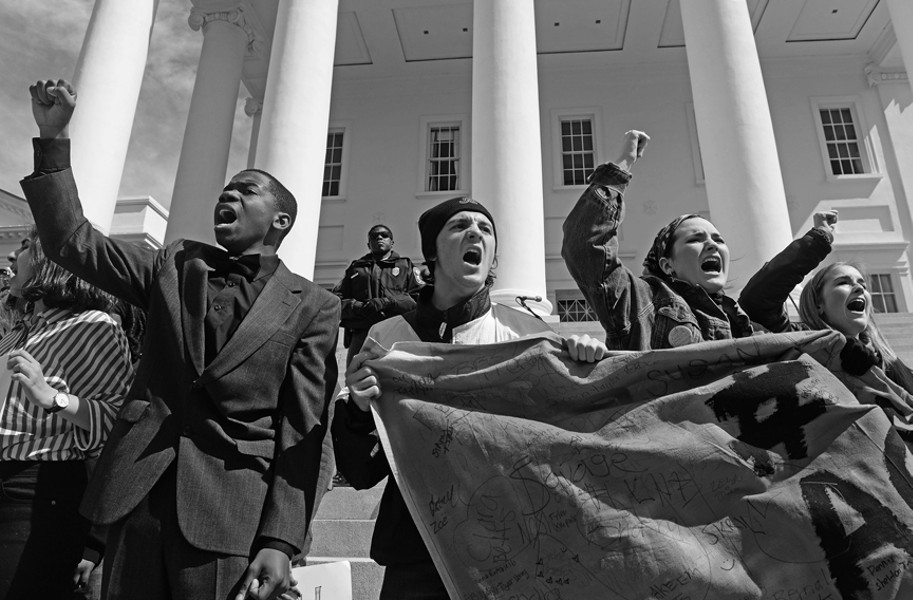 One of the winning images was taken during a National School Walkout to protest gun violence on April 20, 2018, on the steps of the Virginia State Capitol.

Last weekend, at the annual Association of Alternative Newsmedia convention in Boulder, Colorado, Style Weekly photojournalist Scott Elmquist won first place in photography for his portfolio of 10 protest images taken in Richmond in 2018.

This year's competition was different in that all circulations for alt-weekly newspapers in the United States and Canada were combined for each category — making the award all the more impressive and difficult to win. It seems only fair that Style can now lay claim to having the best alt-weekly photographer in the association this year.

A 20-year-veteran of the newspaper, Elmquist is having a memorable year. He recently had a powerful local exhibit that was important to him, "I Am Here: a Space for Communal Expression on Life With Gun Violence," hosted by the nonprofit Initiatives of Change. The event drew hundreds over a weekend to the Canvas meeting space on Semmes Avenue, including many families of gun violence victims.

"Eight out of the 10 shots that were in this [alt-weekly award] were involving gun violence," Elmquist says. Sadly, it's a subject with which he's become well acquainted throughout his long career in Richmond.

On behalf of the staff at Style, we already knew we had a major talent in our midst. Like all great photojournalists, Elmquist has a meticulous eye for detail and is quick on his feet, but he also has the highest professional standards and respect for his subjects and the mission of good journalism. Every week he displays the curiosity of a great journalist, and as someone noted online about local protests, he shows up — a lot.

Elmquist also won this national photography award in 2016 and 2017 when it was given specifically for papers with circulations of less than 40,000. But this one is extra sweet, considering it comes in his 20th year with the paper. Congrats, Scott. It's a privilege to work with you.