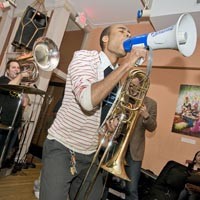 Manliest Band in Richmond: No BS Brass Band
It's true that there are some pretty dudely concoctions producing sound in this town, but how can one compete with the sheer mass of man that is No BS? You can't, and if you tried you'd end up crushed in a tidal wave of testosterone and horn blasts. No BS mostly headlines now, but when it got asked to open for somebody else — the Bio Ritmo CD release party last year, for example — it set up in the middle of the audience and involved the whole crowd. Its members are raucous, informal, engaging and a very hard act to follow.

Audience-Improv Door Prize: That lady's cell phone
The woman whose chirping cell phone could be one of the ethereal sound effects in Charles Ives' “The Unanswered Question” the first time it goes off at a March 8 Richmond Symphony performance. Not the second time, though.

Tabula Rasa Award: Richmond Symphony
A blank plaque, to be engraved later, finances permitting, for the Richmond Symphony, which doesn't know who its next music director will be, or what its new home, the Carpenter Theatre at CenterStage, will sound like, or how difficult the money woes afflicting orchestras nationwide will hit home.

Seediest Tell-All Memoir: Dave Brockie
It had to happen someday. Though the publishing world may whimper and hide, beloved frontman and all-around larger-than-life character, Dave Brockie, aka Oderus Urungus of Gwar fame, is rumored to be putting together an official autobiography of sorts that should make Ron Jeremy's toes curl. Brockie mentioned his plans in an RVAnews blog column, “Gwar, Me and the Onrushing Grip of Death.” Be afraid, Richmond. Be very afraid. This may be the bloodiest, smelliest tale from an artist since the Marquis De Sade — but far less classy. When Brockie sharpens his phallus, few are spared.

Nobody-Knows-the-Trebles-I've-Seen Award: UR's piano
The Steinway concert grand in Camp Concert Hall of the University of Richmond's Modlin Arts Center. It may sound like a harp, or a banjo, or an oud, or an orchestra, or even like a piano, depending on which jazz, classical or new-music keyboardist plays it. No instrument in the city takes on as many different characters from night to night.

Tightest Pants in Richmond: Prabir and the Substitutes
Watching this band of neo-mods rock out with intense fervor always poses the question: Do they help each other into those drainpipes? Or, do they ever come all the way off? In the band, lead guitarist Chris Smith wins the competition. I sometimes worry that his legs may snap while dancing. They haven't yet, however.

Best Composite Performance: Doug Richards doing Villa Lobos
The brilliance of Richmond composer Doug Richards' expansion of Brazilian Villa Lobos' “A Mare Encheu” required the overlay of two flawed performances. The first, with the Richmond Symphony, had the sweep and power, but the details got swallowed in the ringing depths of the cavernous Landmark Theater. The second, with a student orchestra crowded on the Virginia Commonwealth University stage, balanced a more tentative instrumental execution with enhanced vocal clarity.

Best Hipster Shout Out in the Blogs: CNP Records
People in the know have long considered New Jersey's WFMU as one of the most eclectic, original radio stations across our great land. WFMU's “Beware of The Blog” is a daily stop for many looking for unusual, quirky mp3s to download — so it was with pleasure that we noticed Nat Roe's shout-out and seal of approval for the lesser-known Richmond music scene centered around CNP Records. The post (http://blog.wfmu.org/freeform/2009/01/cool-objects-th.html) featured samples of noisy experimental, pop and hardcore music from Narwhalz (of Sound) to local favorites Hot Lava, Diamond Black-Hearted Boy and Bermuda Triangles. Keep the kudos coming. They deserve it.

Artist Most Likely to Tell You to Shut the Hell Up: Liza Kate
If you go to an acoustic show and decide not to use your inside, acoustic-show voice while the bands play, then you deserve the browbeating you'll receive from the stage. Don't let Liza Kate' angelic voice stop you from taking her seriously. Seriously.

Biggest Genre Jump: Josh Small
After listening to Josh's old-timey solo work and his collaborations with Tim Barry, who would have thought he'd be the ideal replacement for Brainworms' original guitarist? Sure, he could shred on banjo and mandolin, but that's a far cry from the experimental hardcore spazz of Brainworms.

Best Musical Residence: Steven Bernstein
New York slide trumpeter and composer Steven Bernstein has made the most of his extended stay in Richmond — three rousing performances, two of which were free, as well as multiple rehearsal and recording sessions for the next Fight the Big Bull CD. Staying in a musician's apartment rather than a hotel, he set a high standard for unpretentious, enthusiastic mentoring.

Best Musical Potlatch: JAM Inc.
The JAM Inc. concerts at In Your Ear in Shockoe Bottom not only provide the ideal, intimate listening environment but also a complete bring-your-own-dish buffet. While the music skews toward bluegrass and blues, jazz, rock and other artists appear as well. Get on the mailing list and buy early — it's a small room and most shows sell out.

Most Ambitious Recent Musical Project in Limbo: Samson Trinh's “Abbey Road”
Samson Trinh's big band arrangements for the Beatles' “Abbey Road” were a big hit with the crowd at the National in June, and the whole suite was recorded in the studio afterward. But when it will be finished and released is anybody's guess. It joins other local-legendary unreleased projects such as Doug Richard's G.A.M.E. album with Rene Marie and the decades-in-the-making Steve Kessler record on the glittering horizon.

Most Promising New Community Band: The Richmond Community Marching Band
The new marching band's first practice at Chimborazo Park brought together a blend of some of the area's top musicians along with a smattering of high-school students and other local players to literally take the Richmond sound on the road. Everything about the first meeting went well — great enthusiasm, good playing, a beautiful spring day and eventually a couple of cops to gently shut things down. The story continues — with permits this time — the last Sunday of every month in Monroe Park.

Best Annual Jazz-Improvisational Event: Something Brian Jones does
It's hard to decide whether to give the award to the communal anarchy of the annual Musicircus salute to John Cage, an hour-long collision of sounds and styles, and the admirably focused “Mingus Awareness Project,” an all-star local concert benefiting ALS. Both are organized by the very capable Brian Jones; perhaps he can decide how to split the honor.

Best Nirvana Cover by a NonNirvana-Cover-Band: the Catalyst and Mouthbreather
If Nirvana had continued down the noisy path paved by the Steve Albini-produced “In Utero,” perhaps it would have ended up in posthardcore-grunge territory currently ruled by our two choices. They pulled out several Kurt Cobain-penned numbers during one of the last shows at the Czar and you would have thought Richmond was the new Seattle. Maybe it is?

Most Outrageous Place to Crowd Surf: The Classical Section at Plan 9
Crowd surfers don't let things like destruction of property deter their fun. So during the Battle for the Next Great Metal Band at Plan 9, Battlemaster lead singer Andy Horn encouraged everyone to keep the surfing contained over the section least frequented by their fans. Sometimes it's easy to forget where you came from.

Band With the Most Stage Divers: Government Warning
If you've ever been to a GW show and stood up front, chances are you left with a severe crick in your neck. It could have been the head banging, but the more likely culprits were the endless flying bodies landing on your noggin.

Stinkiest Punk Band: Parasytic
When the tagline to your festival is “Thinking, drinking and stinking,” you know all three are taken very seriously. As curator of the Kollapse Fest, Parasytic is aware that hygiene is a moot point after hours of shredding and circle pits. Smelling like flowers isn't exactly natural anyway.

Bassist Most Likely to Hypnotize You: Jason Werner of Richmond Engine #3
Runner-Up: Jay Moritz of Brainworms and Snack Truck
Sure, the bass lines aren't original, but nobody cares. Jason Werner plays them with such precision, you'll be too busy staring at his frets and bouncing around the room to realize it's not Les Claypool talking about big brown beavers and race-car drivers.

Special Memories Award: Lamb of God climbs the charts
Where were you when local, Grammy nominated metal heroes Lamb of God released their new album, “Wrath,” and it landed solidly at the number two spot on the Billboard 100 charts with over 68,000 records sold in the first week? Crying in your beer perhaps? Wondering why we can't all just get along? The band kept right on thrashing, unleashing its famed wall of death on the innocent locals of Jakarta, Indonesia —showing young Muslims how we do in the RIC. Some of us, anyway.

Quakin' Ain't Easy Award: Cam DiNunzio and Maura Davis
Proving that it's still possible to wring a little sexiness from dietary fiber, members of Denali, that haunted-house, indie-rock outfit that is now back together, cranked out a little ditty for that most indie of breakfast foods, Quaker Oats. Guitarist Cam DiNunzio works at Black Iris, a music production company that does original scores for companies such as Cadillac and Sharp. For a national Quaker Oats spot, he sang and Denali chanteuse Maura Davis did some gospel backup, as a whole choir. Davis has also, through Black Iris, been the voice of cotton. Denali incidentally will play two shows in June in D.C. and Philly, though it's unlikely that good digestion or wearable fabrics will get much play during the encores.