Including 2020's Best in Show for photography, specialty division, and advertising sweepstakes. 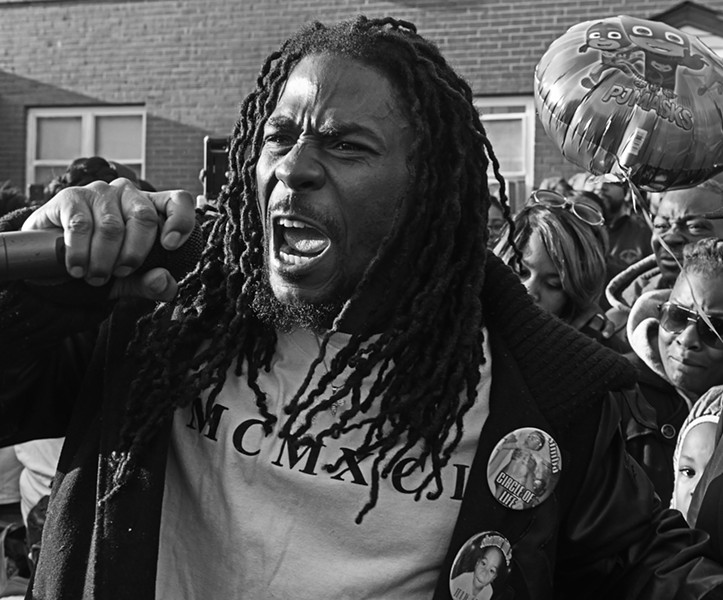 It was a year like no other in a century, with most people experiencing major changes to their work environment as well as their ability to do the most basic, everyday things. But like many others, editors, journalists and salespeople kept right on working through the pandemic -- as always, there was plenty to do.

Style Weekly, with a full-time editorial staff of three employees (editor-in-chief, photographer and creative director) and one sales person, tried to do the same. This week, we learned we had a solid showing at the 2020 Virginia Press Association News and Advertising Contest with a total of 32 awards. A big congrats and pats on the back to the staff and freelancers whose hard work made this happen.

Pictured above in Elmquist's best-in-show photo is Sharmar Hill, Sr. speaking about his 3-year-old son who was shot and killed while playing outside at Hillside Court in February, 2020. The judges comment: "The more you study this image, the more you find a community in grief over a tragedy."

Among our first place winners: freelancer Peter Galuszka won for arts feature with "Telltale Heart," about a new book on the first heart transplant at MCV, while former intern Sabrina Moreno won first place for feature writing ("Faces of Survival/Love at Work"); Moreno also won Outstanding Young Journalist of the Year for her work at the Richmond Times Dispatch covering COVID-19.

Style photographer Scott Elmquist took home six first place awards for portrait, pictorial, sports feature, general news, multimedia news report (with Sarah King) and slideshow. The events covered included a murder vigil for a three year-old boy, the removal of the monuments, a Juneteenth event at the Robert E. Lee Monument and Black Lives Matter protests. It would be a truly horrifying statistic to count the number of times that Elmquist's close-up photos of homicide vigils have won first place awards in this VPA contest over the years -- it would demonstrate the scale of the gun violence problem in Richmond, just as the emotional images show the human toll -- which Elmquist's work has done in exhibits and museums throughout Virginia.

On the sales/advertising side, Dana Elmquist won four first place awards for special advertising sections including Home and Garden, Entertainment and Special Services.

Among our second place winners: Contributor Rich Griset won for feature writing portfolio, including a story on the Henrico Citizen halting its print operation, and local author and teacher Richard Meagher won for column or commentary writing with his backpage opinions on local politics. In terms of reporting on this year's local protests: Leah Small, Brent Baldwin, Samantha Willis, Rich Griset, Peter Begans, and Scott Elmquist won for general news writing for their coverage of the George Floyd protests and related issues.

Our third place winners included Senior Contributing Editor Edwin Slipek, who won for column or commentary writing for his architecture criticism; Brent Baldwin for headline writing; and Ed Harrington, Scott Elmquist and Brent Baldwin won team awards for several specialty sections and editions, including the Arts and Culture pages and The Home Issue.

Again, thanks to everyone involved with Style making it through such a difficult year, including our part-time copyeditor Gordon Poindexter, who still hates semi-colons, Jennifer Waldbauer who takes care of office duties for Virginia Media Group, and the always spirited Mr. Slipek, a longtime positive presence at Style. Having no full-time reporters on staff and with a team this small, everyone plays a critical role in the paper's success. Annual awards judged by employees from out-of-state newspapers who donate their time (like Elmquist and I did again this year for the Maryland newspaper contest) provide a nice boost. But the real joy is in continuing the jobs we love and serving the community with useful, insightful, locally produced stories. Doing that takes serious, around-the-clock commitment and determination -- not to mention unselfish attitudes focused on the team -- in order to steer a small alt. weekly into its 40th year.

To that extent, we're happy for all of this year's contest winners because it means that journalism is still thriving in Richmond. We especially want to give a shout out to former Style Weekly reporter Ned Oliver who won Outstanding Journalist of the Year for his work at the Virginia Mercury, which we occasionally run in Style Weekly's pages (keep an eye out in July) -- and Moreno, who showed her impressive writing talent while an intern at Style.

Most of all, a big thank you to our readers. Everyone is still hoping for a return to normalcy and more public events soon (last year, not so many), so please continue to pick up our papers, let us know how you feel, read our coverage of arts and culture, news and opinion, and continue to support local journalism.