Get to know people involved in designing or selling stylish wares in Richmond, and the first word they'll use to describe their network of peers is "friendly."

It won't be long before you notice a pattern of predominantly women-owned businesses with a penchant for cross-promotion, happy to connect you to "a friend of theirs" who is capable of making your next fashion dream come true.

One name you might begin to hear more often is Katherine Manson. The willowy 20-year-old with nearly waist-length golden hair is a fashion merchandising student at Virginia Commonwealth University, whose enterprising attitude has landed her work at major brands such as Rachel Comey and Creatures of Comfort. Potentially Richmond's next rising star, her future goal is to open her own co-op-style boutique.

Manson describes her personal style as "vintage-inspired, simple, and minimal:" a mix that appears like an enviable cross between bohemian-inspired Stevie Nicks and the eclectic menswear of Annie Hall, which actress Diane Keaton once said she stole from "cool-looking women on the streets of Soho." Intrigued, Style asked her to take us shopping at her favorite Richmond boutique.

We met one afternoon with her at top pick: Na Nin.

Upon entering, it was no surprise to find that Manson and Angelica Rosales, the director of communications and sales for Na Nin, already know each other through mutual friends and "that Valentine costume and textile talk last year," Manson says. While Manson peruses hanging garments in the quaint, uncluttered boutique, Rosales discusses the Richmond fashion and design scene.

"There's quite a few makers and designers who are based in Richmond and we all support each other," she says. "We all hang out together, we represent [each other's] lines, we're all rooting for each other. … I think it even comes across on a national level, how supportive the Richmond community is." Considering Na Nin's 116,000 Instagram followers, Richmond clearly has potential to be a city where the style-savvy can not only live, but thrive.

After a handful of minutes, Manson makes her first pick: a Ilana Kohn Gary jumpsuit ($297). "I went to this event her company had this summer and I met her [designer Ilana Kohn]," Manson says. "She's really sweet."

After her gaze lingers on the dark fabric of the scoop-necked, relaxed-fit jumpsuit, she continues through the store, swinging behind her the tooled leather bag she's been wearing since elementary school.

Next, Manson singles out several of Na Nin's original designs, including the vintage-inspired, cream-colored Townes trouser in raw silk ($289), a soft brown hand-knit cotton camisole ($190), and the Na Nin fragrance Jolene (2 ounces for $64, 10 milliliter travel size for $20), part of its signature line of fragrances, All are named after songs that owner Kate Jennings associates with different moments. "I got it the first time because I love a Dolly Parton reference," she says. 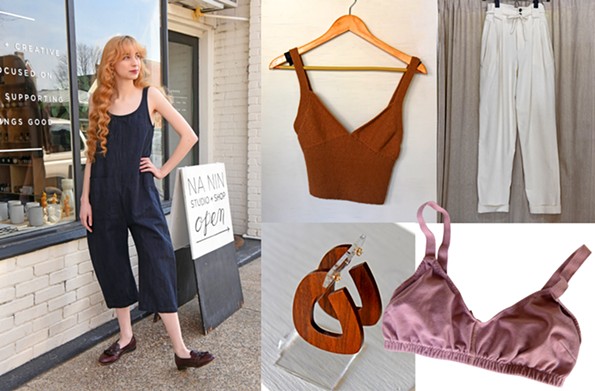 "Sometimes when you're interested in sustainability but you also work in fashion, it can be a really hard thing because you're producing so much," Rosales says as Manson nods in agreement. "[Pansy Co.] is so simply done and you feel so good about having it. It's all organic cotton that's grown in North Carolina, the rubber is domestic as well, and it's sewn and dyed in California."

Being a careful consumer is a principle that both Manson and Na Nin, which began as a meticulously curated vintage shop, share. Manson has been interested in sustainable for a long time, having done research projects on the subject and worked with sustainable designers.

"That's something I always work for, and I think Na Nin does a really good job of choosing independent sustainable designers and thrifting," she adds. "Buying second-hand is one of the most sustainable things you can do."

Manson's style and career are young — and still growing.

"Lately I've been dressing [in a way that is] a lot more menswear inspired, usually loafers or oxfords with a pair of wide leg pants and a button down," she says. Her instinctive taste and unbridled curiosity are skills that bode well for her fashion future.

She is right. S