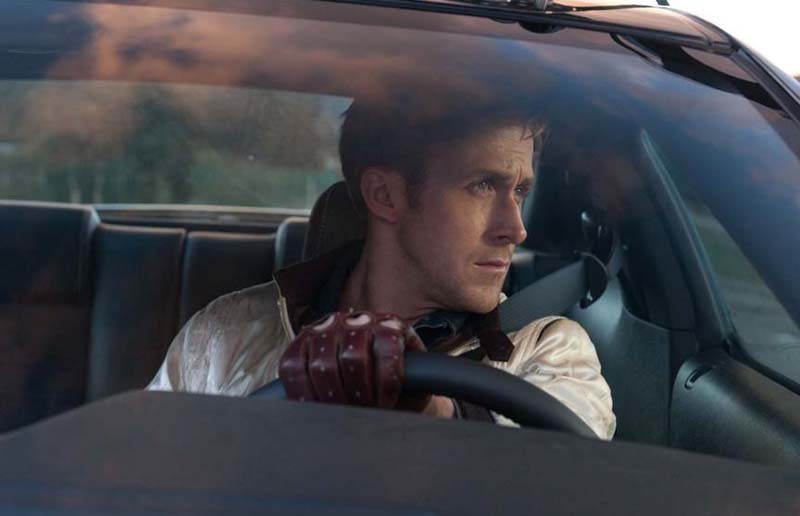 With the economy the way it is, you often hear of the need to invent your own career. How about freelance getaway driver? Can you get a Cobra policy for that?

In "Drive," Ryan Gosling's character is known simply as the Driver, and for good reason. He's also a stunt driver for Hollywood movies, an ace mechanic and a stock car racer. How? Unfortunately we never find out, but it's doubtful that AAA covers any of it.

The movie begins with an encouraging combination of style and suspense, which leads to examples of bodily harm that are even more creative. In between we get a little romance and the interference of insidious mob types who, as always in movies like this, muscle in between the quiet loner and the object of his affection. Do the love interests always have cute little kids who get caught in the crossfire? All we can be sure of is that director Nicolas Winding Refn likes violent movies about men without names, and he appears to have seen a lot of them.

Our introduction to Driver involves his latest job, picking up two criminals from a heist near downtown Los Angeles in a plain, silver Chevy Impala, which Driver has souped up for the job. You get the feeling that the cops discover the criminals because if they didn't there would be no opportunity for a chase sequence, but the good news at least is that it's a good one. The methodical game of cat and mouse is unusual for an action movie. Driver has brought along a police scanner, and instead of tearing through the city streets, he ducks under an overpass to furtively listen in on his adversaries. We wait along with him, the lack of music on the soundtrack heightening the suspense. When danger passes, Driver is back on the street, blending in with traffic; then he's speeding over a bridge; then he's silent again, weaving in and out of the purview of prowling police cruisers and helicopter teams.

The result is thrilling in a way rarely considered by action filmmakers in today's world of shoot-'em-if-you-got-'em special-effects bonanzas, an example that less is frequently more. No one seems to be advertising this, but Refn's opening sequence is nearly identical to one in Walter Hill's "The Driver" (1978), starring another Ryan (O'Neal) as a purse-lipped — also nameless — automobile guru. "Drive" claims as its source a 2005 novel of the same name by James Sallis. I haven't read the book, but I don't know why it was necessary. Refn is more interested in creating a pastiche of other movies, including films noir, drive-in-cinema and their descendents, than faithfully adapting anything.

When the references are oblique and peripheral, as with the pink cursive titles and disco soundtrack (both reminiscent of Paul Schrader's "American Gigolo"), they nicely evoke a mood. But the whole idea of the silent loner embodied by Gosling is a rickety cliché, one that in this case comes dangerously close to self-parody.

Driver has begun to notice his neighbor, Irene (Carey Mulligan, the mousey British actress from "An Education"), a pretty waitress whose husband, Standard (Oscar Isaac), is trying to deal with some debts pressed upon him during a brief prison sentence. The gallant Driver agrees to help, mostly because he doesn't want to see Irene and her cute little boy get hurt by the nefarious gangsters who are pressuring Standard to rob a pawn shop as repayment. Even if you haven't heard a character like Driver tell gangsters that he'll do the job but that it means leaving the family be, you just know it's not going to work out that well. Driver gets crossed, and there's hell to pay.

The movie is another study of violence for Refn, following "Bronson," his colorful 2008 biopic about the notorious British criminal Michael Peterson. Starkly different in some ways, both movies see their subjects as opportunities to fetishize brutality, not explore character. The problem is when such a treatment gets in the way of reality and becomes confusing. "Drive," for one thing, wants us to believe in a myth — a man who's insanely sane, perversely good, judiciously barbaric. He's up against bad guys, such as Albert Brooks and Ron Perlman, who can only function in such a light as villains from much worse movies. Maybe we want to know what moves all these people, but the movie can't tell us. They aren't characters and "Drive" isn't a story. They're affectations. (R) 100 min. S