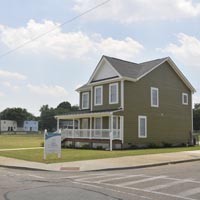 This month the Richmond Redevelopment and Housing Authority celebrates National Homeownership Month with tours of the revitalized Blackwell neighborhood, but the events highlight lingering questions about the fate of its former residents.

In October 1997, U.S. Rep. Robert C. "Bobby" Scott, D-Va., presented a federal check for $26.9 million to the city's housing authority to demolish 440 public housing units in Blackwell in South Richmond. It was hailed as a promising urban renewal program for one of the city's most crime-infested areas.

But what happened to the families that got the boot? Lallen Johnson-Hart, a former student at Virginia Commonwealth University, wrote her master's thesis examining just where the original tenants ended up.

Of the 286 families for which data was available, Johnson-Hart found that 45 percent moved to other public housing units in the city. Slightly more than half concentrated in the city's South Side, East End and North Side, she writes - "places featuring high poverty rates."

Outside the city, the largest group of Blackwell households settled in central Henrico County - about 24 percent. Chesterfield County absorbed about 13 percent, and 5.5 percent moved to Hanover County "along the I-95 corridor and between I-295 and the Henrico County line."

"Are we playing chess with these people? What's going to happen to them?" Michela M. Zonta, an assistant professor of urban studies at VCU, asked in an interview with Style Weekly in 2007. "In their little social microcosm, it's devastating. They don't have child-care facilities. They don't have transportation. They rely on a very limited social network. I don't think it's just to simply forget about them."

Even as the former residents rebuild lives in other areas, much work remains to be done before the new Blackwell is complete.

Since a developer setback derailed reconstruction in 2002, the housing authority has struggled to complete the project. Approximately 145 detached single-family homes still need to be built. RRHA plans to complete them with help from the Better Housing Coalition and South Side Development. The authority has completed about 161 apartment units, 75 of which are available to the same low-income tenants who were originally booted out of Blackwell.

That qualifies as a total failure, City Councilman Marty Jewell says: "Blackwell, Hope VI, it is the poster boy of how not to do a Hope VI project in the nation."