What can VCU, and Richmond, learn from the University of Virginia’s bungled firing of President Teresa Sullivan? 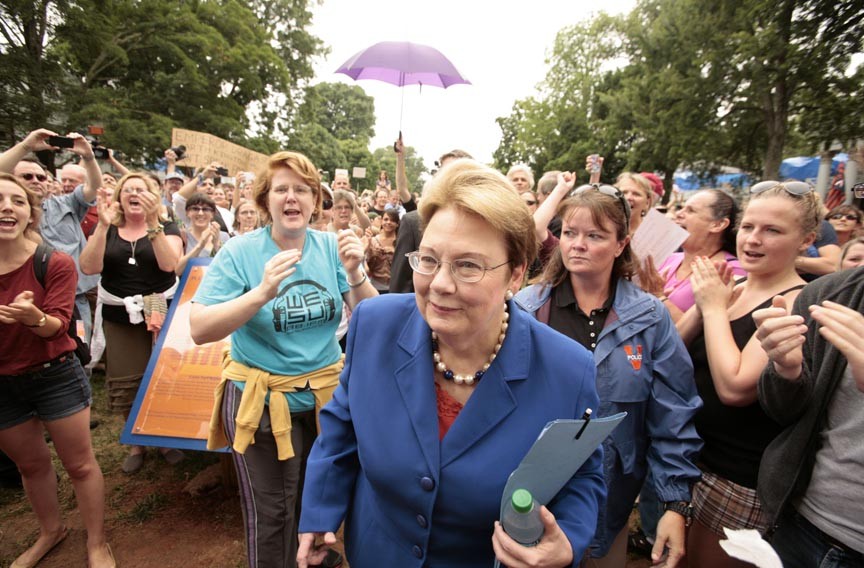 Update: Teresa Sullivan was reinstated by the U.Va. Board of Visitors Tuesday afternoon. After a motion by Rector Helen Dragas and a board member Heywood Fralin, the board voted 16-0 to end the weeks-long controversy and reinstall Sullivan as president of the university.

A nationally acclaimed scholar and administrator, University of Virginia President Teresa Sullivan, was cashiered June 8 in a covertly orchestrated putsch by several members of the university's Board of Visitors.

The coup was led by Rector Helen Dragas, a U.Va. alumna and owner of a Virginia Beach construction company. She contends that Sullivan had to go because of her "philosophical" differences with the board, her alleged lack of strategic vision and an unwillingness to embrace new technology in tough economic times.

The ouster backfired. Angered students, faculty and alumni raised such a furor that Mark Kington, who plotted against Sullivan with Dragas, resigned his post as vice rector. The board appointed an interim president but agreed to hold a special meeting June 26 to consider reinstating Sullivan.

Late last week, Gov. Robert F. McDonnell sent a tough-worded letter to the board demanding a resolution by June 26 or else. "If you fail to do so, I will ask for the resignation of the entire Board," he wrote.

Sullivan's bizarre firing and the ensuing debacle raise serious questions about the path of higher education: Can offering education online really supplant in-person learning, or does it cheapen it? Should humanities classes be sacrificed for budget cuts? And just how competent are politically appointed boards of visitors overseeing the state's public schools, including Virginia Commonwealth University?

Dragas, who has apologized for her strong-arm approach, remains vague about why she wanted Sullivan to go. While she waffled with her explanations, more information emerged. It was revealed that Sullivan, while opposing massive cuts, was seriously worried that U.Va. was resting on its laurels and badly needs upgrades. Further information came after the student newspaper, the Cavalier Daily, obtained board emails through the Freedom of Information Act.

The race to compete online

Prominent universities such as Stanford, Harvard and the Massachusetts Institute of Technology now offer courses online for free or for a small payment. Supporters say that switching to online classes is essential if universities are to avoid a downward spiral of rising costs and tight budgets. A week before Sullivan's ouster, for example, Dragas emailed Kington a story in The Wall Street Journal on the topic with the message, "Why we can't afford to wait."

Of special interest to them was a well-publicized pilot program at MIT and Harvard called edX, which gives some of the schools' course content in innovative, interactive ways that go beyond the usual video lectures. Yet the program has built-in limitations. According to its website, the course doesn't allow participants to claim Harvard or MIT credits that could be used for a diploma. Nor can students attending either school.

Although now dubbed a "revolution" by right-wing commentators, Web-based learning has been around for years. It has problems, such as maintaining credentials. Early pioneers are for-profit outfits such as the University of Phoenix and Capella University, which have been criticized for their lack of standards.

In 2008, for instance, controversy erupted after then-Richmond police Chief Rodney Monroe was awarded a degree from Virginia Commonwealth University that was based partly from credits he got online from the University of Phoenix. Eager to claim Monroe as a graduate, the police chief was awarded a degree after earning just six credits from VCU (the minimum requirement is 30 credits), despite protest from at least one administrator. Monroe, at the time so popular he was considering a political run, left Richmond shortly thereafter to become police chief in Charlotte, N.C.

It also isn't clear whether Dragas and others fully understood the Web-learning situation at Virginia schools. The Mellon Foundation has spent millions of dollars developing distance learning and online college programs in Virginia. Sullivan had proposed increasing the use of Web learning for underclassmen so precious resources could be used in more personal teaching for advanced students.

As at any university, Virginia's public schools have independent oversight in the form of boards of visitors appointed by governors. The system results in boards typically made up of successful business people who are major contributors to political campaigns or to the schools. Dragas, an appointee of former Democratic Gov. Tim Kaine, has given more than $70,000 for mostly Democratic campaigns since the 1990s, according to the Virginia Public Access Project.

Of the current U.Va. board, which has 15 members following Kington's resignation, eight were appointed by Kaine. After July 1, three new members will be selected by McDonnell, who also has the power to reappoint two, including Dragas. Twelve of the board members have business backgrounds, two are with law firms and one is former state delegate. None has a professional education or science background. Only two are women.

The political nature of public university boards can make them more sensitive to political rather than educational or managerial problems. In 2005, Gene Nichols, a noted law professor, became president of the College of William and Mary. Yet he soon was removed because he was deemed too politically and culturally liberal by the school's board. He allowed a sex-workers art exhibition to be displayed on campus and drew wrath when he ordered a crucifix removed from the altar in the Wren Building chapel when non-Christian events were scheduled. His ouster was secured when Jim McGlothlin, a wealthy, conservative alumnus and coal baron, withdrew a $12 million donation to the school. 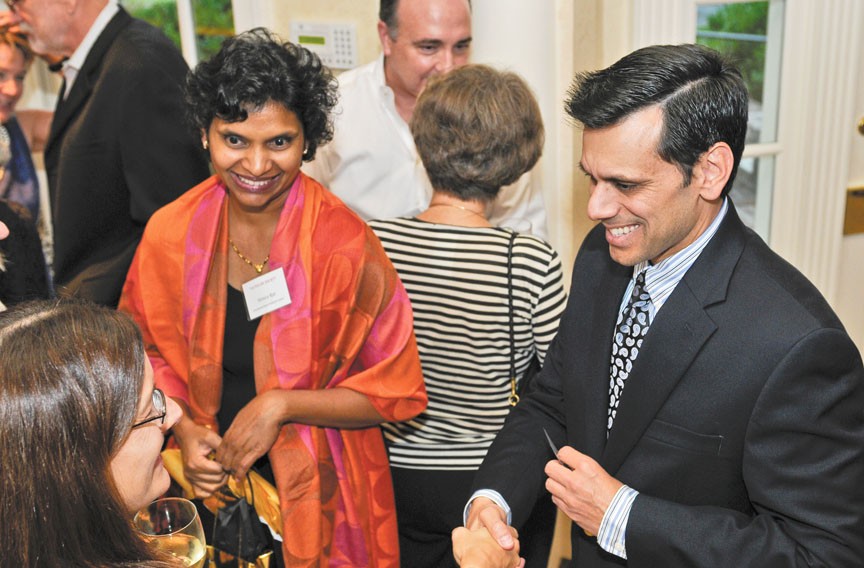 Another problem occurs when a business-heavy board tries to apply corporate-based decision making to universities. That may have been part of problem with Dragas, who seemed comfortable with making difficult decisions unilaterally at her construction company such as one to replace shoddy, imported drywall at no charge to customers. That skill may not have been transferable to the university, where she drew criticism for embracing what she thought was dramatic new strategy in online education without informing or involving much of the university community. "Corporate-style, top-down leadership does not work at a great university," Sullivan said. "Sustained change with buy-in does work."

A classic board problem is that if it must face problems with a college president, it could backfire because members often are the ones who hired that top administrator. Such was the case in 2009 when the VCU board hired as its president Michael Rao, the former president of Central Michigan State University.

Rao ran into trouble in late 2010 when it was revealed that he'd required staffers to sign confidentiality agreements that they wouldn't reveal anything about Rao or his family. He also was criticized for letting his wife, Monica, who had a minor job at the university, act as his emissary in personnel matters.

VCU's board hired an outside consultant who also had been involved in Rao's hiring. Shortly afterward, the board met with Rao in closed-door meetings to discuss the consultant's report and decided to keep him, later extending his contract with a pay increase.

The Rao controversy never generated the heat that Sullivan's firing has. The U.Va. board has been chided for keeping its anti-Sullivan proceedings secret and possibly holding an illegal meeting to affect her departure. The full board never convened to dismiss Sullivan, and only three members met with her, telling her to resign because they had the board votes to get rid of her. The facts outraged the U.Va. community, which is proud of its stringent honor code. Dragas drew further fire for not explaining the decision publicly, sparking more rumors.

Dragas had quietly considered hiring a consultant for $7,500 to handle the public relations fallout from Sullivan's departure, according to her emails released by the university to the campus newspaper. The Richmond Times-Dispatch later reported that Thomas Farrell, head of the powerful utility Dominion Resources and a former U.Va. rector, was dispatching two top public relations experts to help the U.Va. board handle damage control. Farrell, a close ally of Gov. McDonnell, is on McDonnell's board to explore higher education. Why those experts were needed was never explained. A U.Va. spokeswoman says any public relations spending will come from nonpublic funds.

What Sullivan allegedly did to merit dismissal remains to be explained. At other state universities, boards seemed to have cause to make changes. At the University of Mary Washington, the board forced out President William J. Frawley after he twice was charged with drunken driving within two days in 2010. Even in the Rao matter, there seemed to be cause to investigate.

Regardless of whether Sullivan is reinstated, the fallout from Dragas' bungled coup will have far-reaching impacts. It's damaged the reputation of a prominent school and could affect its accreditation. The affair is certain to play a role in upcoming political races, such as former Gov. Tim Kaine's campaign against George Allen for U.S. Senate. Meanwhile, the larger issues confronting the state's public universities remain unaddressed. S