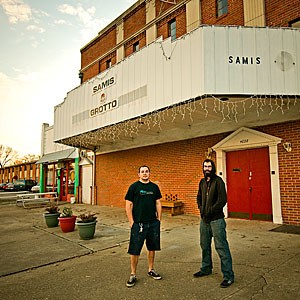 To get to RVA Studios new home, you have to first find Macarthur Avenue. And tucked into that small, tony enclave, inside the graying Bellevue Theater, past the stage once graced by a young Willie Nelson and Ernest Tubb, through the Fez Club and past the wine-colored leather couches. Up in the dust-covered projector room, there is a burly, animated 26-year-old with a beer buzz, excitedly talking about recording music.

“This place is a Delorean, a time machine that we just happen to luck upon before anybody else,” says Aaron Reinhard, giving the grand tour with his big-bearded partner, Evan Bateman. Together the pair makeup two-thirds of the triumvirate that runs RVA Studios. The group took up residence three months ago, with plans to establish it as a destination for local recording artists.

Set up in the theater's top-floor projection room, the studio is complete with all of the modern bells and whistles. But Reinhard plans to take advantage of the theater's unique layout and the group's own analog equipment to create a lush, natural sound. “We have all the modern junk if digital is the way you want to go,” he says. “But for someone who wants to record live sound in a big room, this place is perfect.”

Built in 1932, the 200-seat Bellevue has been in past incarnations a movie theater and the beating heart of a regional, live country-music scene. But since 1969 it's served as the local home of the Sammis Grotto, a local Masonic lodge now headed by its current “monarch,” H. Paul Scholte. There are now only 79 dues-paying members, he says, down from a Depression-era high of a few thousand. To help pay the bills, the Grotto had been looking for opportunities to generate additional cash. Enter Reinhard and RVA Studios. “It's a win-win situation for everyone involved,” Scholte says.

But the building can't thrive without the building itself thriving, explains Reinhard. So he, Sholte and Bateman are formulating plans to set the Bellevue up as a low-cost forum for public events, including but not limited to burlesque shows and live music events with most of the proceeds going towards a building fund.

Says Reinhard: “This isn't for profit, this is for awesome.”