Politicians call on young people to take to voting booths.

"You know that whatever affects our communities affects our schools,” said Ta’Quan Grant, a Thomas Jefferson High School senior and school board candidate, during a gun violence protest on Friday, April 20.

Anna Cook crouches down among classmates and friends, using a borrowed black marker to write on a small piece of white poster board. She’s one of over 300 Richmond-area students to walk out of school on Friday and attend a gun reform rally that begins on Brown’s Island and culminates at the State Capitol after a half-mile march.

A student speaker energizes the crowd from the concrete steps, and when Cook finishes writing she stands and resumes her spot next to her friend and fellow Douglas S. Freeman High School senior, Talia Moore, holding the sign in front of her and looking straight ahead through her aviator sunglasses.

Cook, 18, has never cast a ballot before. And like a lot of high schoolers her age, her interest in politics was fairly minimal before this year. But when the student-led movement to end gun violence and implement stricter gun policies began to pick up steam after the Feb. 14 shooting at Marjory Stoneman Douglas High School in Florida, she started paying more attention. She also registered to vote last week.

Moore, whose younger sister marches alongside her holding a sign stating that she’s “only 15,” adds that as kids, she and her peers are frustrated that they can’t rely on adults to address gun violence.

“We really feel like it’s an issue we’re taking responsibility for. No one else seems to be doing anything. We’re thinking about Dave Brat who hasn’t held a meeting in eons,” she says, referencing Virginia’s 7th District Congressman with an 86% rating from the NRA, who reportedly hasn’t held a town hall in more than 300 days. “We’re waiting for change from them, and that’s not happening, so we’re having to take responsibility for it ourselves. I guess this is the first opportunity we’ve had as teenagers, as people who can start to have a voice, to be able to express it.”

Cook and Moore can’t wait to earn their first “I voted” stickers this fall, and their generation’s voting power is the day’s prevailing message. Speakers repeatedly tell the crowd that the only way to change the policies is to bring in new policymakers. Former 5th District Representative Tom Perriello takes the mic for a few minutes, encouraging students to ignore everyone — including himself. 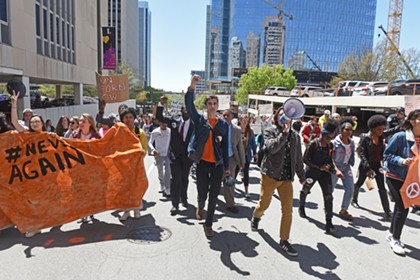 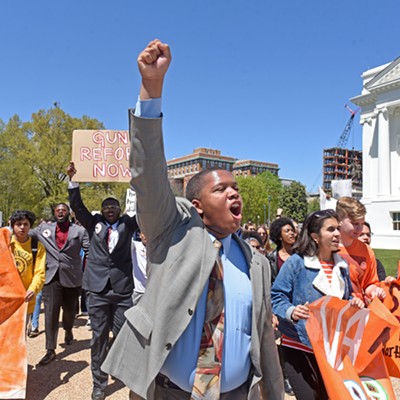 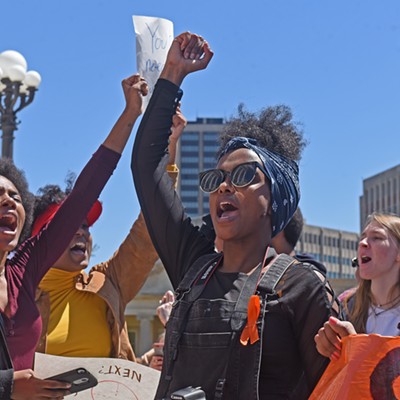 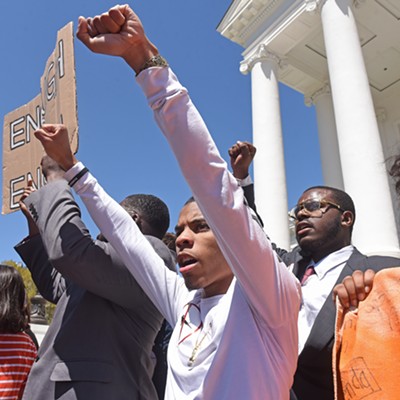 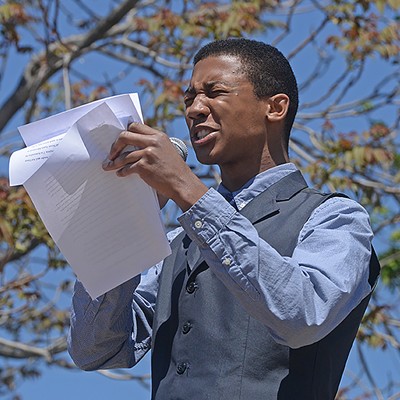 Ta’Quan Grant, a Thomas Jefferson High School senior and school board candidate who grew up in public housing, shares his own experience with gun violence. Grant reminds the crowd that there’s more to the movement than school shootings, and it’s something he and his classmates, who walk through metal detectors every morning, face on a regular basis.

Once the rally reaches the steps, students lead the group in a series of chants like “Hey hey, ho ho, the NRA has got to go” and “Protect lives, not guns.” After a moment of silence, more than a dozen speakers address the crowd. Among them are Gov. Ralph Northam, Lieutenant Gov. Justin Fairfax, Attorney General Mark Herring and Delegate Chris Hurst, who lost his girlfriend to gun violence in 2015. The politicians have similar messages for young people: Keep fighting, keep marching, keep walking out of school (but don’t forget about your grades, of course) and vote.

“This day, just like April the 16th, is another day when we remember people whose lives were lost in an act of preventable violence,” says Northam, referencing this week’s anniversaries of both the Columbine and Virginia Tech shootings. “Every year we add a few more dates to the calendar and pledge to never forget the innocent lives that were taken by a person who never should have gotten his hands on the weapon he used.”

Northam goes on to say that despite marches and policy proposals in the past, the movement for gun reform always loses momentum, and “the gun lobby and the manufacturers behind them prevail again and we return to normal until the next tragedy occurs.” He also addresses the criticism that students have received for skipping almost an entire day of school to attend the rally.

“As your governor, I have a responsibility to tell you about the importance of staying in school,” he says as the crowd chuckles and murmurs. “But I can’t think of anything you could be learning right now that is more important than the incredible power and responsibility that you have to stay in this fight and hold people like us accountable for keeping you safe.”

The governor says he is willing to “work with people from both sides of the aisle” to fight for responsible gun ownership, but he ends his segment with another reminder that midterms are coming up.