Students on a Mission

VCU Student Power is featured in the third installment of our roundtable series with protest participants.

by Brigid Cryan and David Dominique

Since the killing of George Floyd, Virginia Commonwealth University Student Power has been central to activism in Richmond, including holding demonstrations on campus and collaborating with other organizers in Richmond and throughout the region.

The group is affiliated with Virginia Student Power Network, a statewide coalition of college-based organizations whose core values include the beliefs that “education is a right and should be accessible to everyone” and that Virginia borrowers should be protected from “predatory loan servicers.”

VCU Student Power states its own mission as making the university more “equitable, accessible, and inclusive.” Members of the group are litigants in the American Civil Liberties Union’s lawsuit regarding use of excessive force during a Richmond protest June 22 and the organization has been central in making demands for reform in the university’s approach to student mental health, crisis intervention and campus policing.

In a roundtable with Style Weekly, the third in our series, four of VCU Student Power’s organizers discussed the expansion of the group’s focus to include working with the greater Richmond community, the group’s position on returning to campus during the COVID-19 pandemic and their demand that the university defund its Police Department. 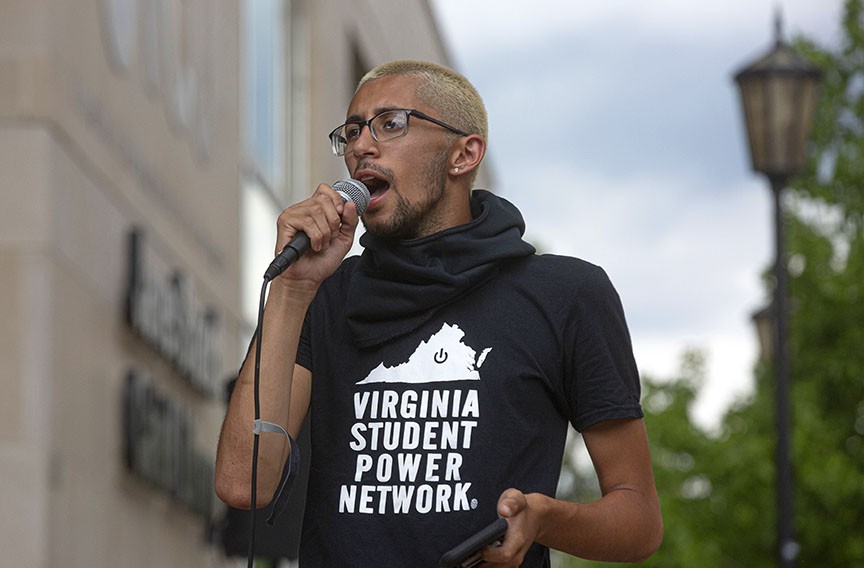 Style Weekly: As students return to campus, what plans do you have for the fall semester?

Steven Ramlogan: We look forward to bridging the gap between VCU and the local community. We’ve been working with Race Capitol, [Richmond Transparency and Accountability Project] and Princess Blanding for about two years now. We’ve been building those networks of support with other community organizations. When actions started occurring in Richmond, we decided to use our platform to partner with and elevate other community organizations. We’re here to assist with what we can in Richmond.

Mikey Ramlogan: A VCU student is not just a student of the campus, they are also a citizen of Richmond. We’re here for four years, but native Richmonders live here for decades.

Starr Robinson: We’re connecting students and community members so that we can foster this community where, collectively, we are looking for liberation.

What place should the VCU Police Department have on campus?

M. Ramlogan: We are all for the defunding and abolition of the VCUPD. It’s important to note how much of our funds are actually going towards policing.

Is your group in communication with the VCU administration regarding the school’s practices for handling student mental health?

Munshi: We’ve had conversations with the director of the university counseling services, the chief of VCUPD, and the provost, along with many other administrators, going back and forth about why we do not want policing in our mental health. On May 11, VCU separated the dispatches between VCUPD and the counseling center so students are no longer required to call VCUPD at any time in order to speak to a counselor.

That is a success, but we are pressuring VCU to now abolish VCUPD as a whole. We don’t just want them not present in our mental health, they shouldn’t be on our campus at all.

S. Ramlogan: We only have one psychiatrist at VCU, which is a large issue considering that individual doesn’t have specifications for dealing with a multitude of different mental-health-related issues. Wait times for mental health services at VCU are sometimes ludicrous. It can be up to a month or two months until you’re able to see someone. They won’t necessarily schedule even emergency appointments right away, which is a large issue for a university that prides itself on putting student safety foremost.

Is there a safe way for VCU to be conducting classes in person this semester?

Munshi: We would like to see VCU actually listening to students and faculty members. We’re telling them that it’s not safe. We need to look out for people who are immuno-compromised, people who are disabled and people who may not be able to come on campus. We want the university to go fully online.

S. Ramlogan: Not only do we want them online, we want the classes to be scaled in terms of pricing so they can be considered online classes.

Robinson: VCU, in general, has to center the voices of those affected and really listen to them and what their needs are. Centering their voices is the first and biggest step. What we saw during our town hall was that so many students, faculty members, workers were just not heard. We saw that with VCU abruptly moving everybody’s stuff out of the Honors College. That relationship of trust is not there right now. We should be repairing that so we can all trust that we’re going to be safe. I just don’t think those conversations have been had yet.

What happened to students’ belongings in the VCU Honors College dorms?

S. Ramlogan: Technically, there were no students on campus and students still had their possessions in the Honors College dorm building. The Honors College had offered to use the dorm building as a medical facility during this time and hired a contracting company to remove all of the items from the students’ rooms and put them in storage facilities off-site.

They did not inform students prior to doing this. We found out because a video about it was leaked by a private employee on Twitter. VCU didn’t address it then, but they removed all the items.

There was no resolution given until we hosted a virtual town hall in which we spoke directly to Dr. Peter Buckley, who is the former dean of VCU Health Services, and he apologized to us. We informed him that it would not be enough to apologize in a virtual town hall Zoom meeting with a limited amount of students.

Robinson: Especially in positions of power, people think that they’re owed trust, but time and time again, VCU completely betrays everything they stand for. People didn’t know where their belongings were, who was handling them or what was going on, and some of them had been told that it might be a month or two before they could go to the storage unit. A lot of VCU’s students have work-study positions or are working full-time or part-time jobs. They use their limited income to buy items for their dorms that could be damaged or broken by the university. That’s a problem for a student who is working for all they’ve got.

S. Ramlogan: Dean Buckley released a statement apologizing, but nothing has been done to remedy the ongoing issues. Students still have to go back to that storage unit to reclaim their stuff and the university won’t pay for damaged or broken items.

Robinson: It’s important for students to be able to have an outlet for their voices to be heard, and that’s why we will continue these town halls. We’re hoping that administration will continue to come to them.

Munshi: In the early 2000s, when VCU purchased the Honors College dorm building, it was a hospital. There was a report that there were many individuals displaced when that hospital was purchased. It’s not a surprise to us. They displaced students, they displaced community members before. People should not be surprised when they’re seeing VCU taking people’s belongings and displacing them because VCU has displaced many people.

How can people get involved with the work you’re doing?

Munshi: Due to COVID-19, we had to shift a lot of our organizing really fast, and we did that through doing virtual town halls and having events online. That’s where we disclose a lot of information on what type of help we need and where. That’s how we bring people together.

S. Ramlogan: We’re very active on social media. You can find us @studentpowervcu on Instagram and Twitter. Members can directly engage with us, working with us toward specific objectives. We do a lot of petition work and direct action building, especially lately. We always need more resources, especially at these actions.
In general, to keep connected with us, just keep informed and up-to-date about what we’re doing. We do a lot in solidarity with other campuses throughout Virginia and nationwide under the umbrella of Virginia Student Power Network.

M. Ramlogan: We are the constituency of our school. Our school makes decisions, but they’re supposed to be positive for us. For so long, our administration hasn’t had Black and brown students, queer students or disabled students on the forefront of issues. Having a space where you can share your truth and be OK with that is really what we’re trying to accomplish here.