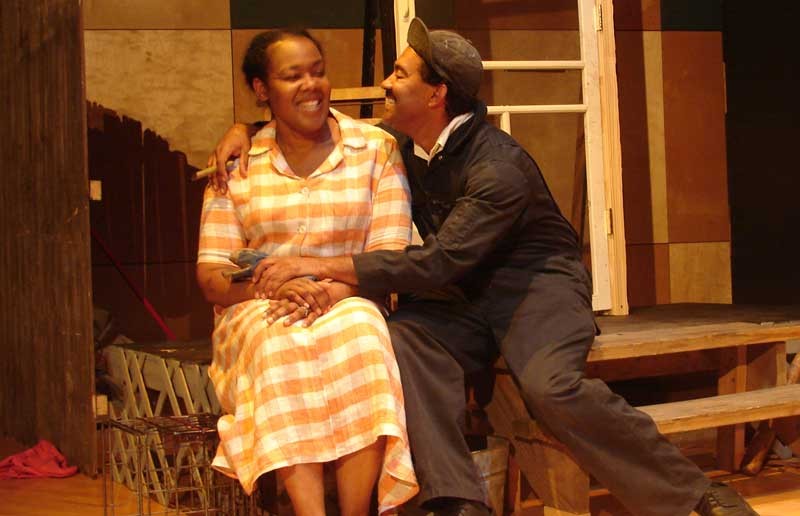 African-American playwright August Wilson seemed to enjoy a running joke in his plays: the watermelon. Wilson must have found some perverse joy in incorporating such a racist symbol into his rich theatrical portrayals of black America.

“Fences,” fittingly enough, begins with two garbage men telling a watermelon joke. The play won Wilson his first Pulitzer Prize in 1987 (the second came in 1990 with “The Piano Lesson”), and was the 1950s installment of his Century Cycle -- 10 plays chronicling the black experience in each decade of the 20th century.

The play, currently being produced by the African American Repertory Theatre of Virginia, focuses on the Maxons, an African-American family in Pittsburgh. Patriarch Troy’s headstrong and stubborn nature eventually leads to his downfall, and the suffering of those that love him.

While J. Ron Fleming’s Troy might not be as physically imposing as Wilson's text specifies, the actor more than makes up for it with his onstage presence. Fleming’s stand-out performance is well worth seeing, but he seemed to have trouble with his lines on opening weekend. Delvin Young’s amiable turn as Troy’s best friend Bono is fittingly understated.

Rochelle Turnage, in her performance as Troy’s wife Rose, has difficulty portraying all the dimensions of the conflicted character. Rose is complex, balancing the desire to be a supportive wife with the anger of being cuckolded. Even at the play’s end Rose is still dealing with these competing emotions. Justin Delaney imbues his role as Troy’s son Cory with the perfect mixture of rebellion and respect for his father.

There was also one absolutely shameful performance the night I attended—that of the audience members sitting directly in front of the stage. Throughout the entire play they were talking and laughing disrespectfully. “Fences” is not a comedy, and I was angered to have some of the show’s most dramatic scenes undercut by a sea of laughter. Had I been a performer, I would have been furious.

D.L. Hopkins' direction is troubled. In the scene where Troy won’t let Cory into the house, the idea that they would come to physical blows while 15 feet away makes little sense. The performances in “Fences” aren’t as uniformly strong as they were in last season’s “Jitney,” the 1970s installment of Wilson’s cycle. Still, laughing and all, it was a good evening of theater.